So Joshua called together the twelve men  he had appointed from the Israelites, one from each tribe, and said to them, “Go over before the ark of the LORD your God into the middle of the Jordan.  Each of you is to take up a stone on his shoulder, according to the number of the tribes of the Israelites, to serve as a sign  among you. In the future, when your children  ask you, ‘What do these stones mean?’ tell them that the flow of the Jordan was cut off  before the ark of the covenant of the LORD. When it crossed the Jordan, the waters of the Jordan were cut off. These stones are to be a memorial  to the people of Israel forever.”
-Joshua 4:4-7 (NIV) 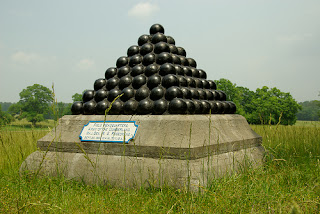 
May all who need such hope this year see it. And may we tell that story well.

Posted by Patrick Odum at 2:47 PM No comments:

When the set time had fully come, God sent his Son, born of a woman, born under the law, to redeem  those under the law, that we might receive adoption to sonship. Because you are his sons, God sent the Spirit of his Son into our hearts, the Spirit who calls out, “Abba, Father.” So you are no longer a slave, but God’s child; and since you are his child, God has made you also an heir.
-Galatians 4:4-7 (NIV) 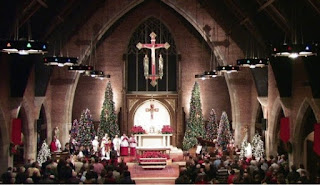 It happens most every year. Someone I know — at least one someone — will say it. This year it happened to be my doctor.
“This must be a busy time of year for you.”
She said it because she knows that I’m a minister, and because she’s a believer, and so she assumes that Christmas for me must be like tax season for accountants: lots of overtime, lots going on, lots to take care of. It’s an understandable assumption, and one I rarely bother to correct. What’s the point, really, in a setting like that to explain that not all churches celebrate Christmas with pageants and extra services and such? She was more or less just being polite, after all.
I didn’t grow up with Christmas as a specifically religious holiday. That isn’t because I didn’t grow up going to church — I did. It isn’t because my parents weren’t explicit about their faith — they were, and are. I mean, I knew that Christmas was about the birth of Jesus. A lot of people I knew went to churches that were decorated for Christmas and had those pageants. I went to more than one, in fact. Lots of people I knew, even some who didn’t grow up going to church every Sunday like I did, attended a Christmas Eve mass or service.
Not me, though. The church I grew up a part of didn’t do any of that. We went to church on Christmas when it fell on a Sunday or Wednesday. (Sundays were tough; we had to interrupt or delay present-opening, which my sister and I hated. Which, come to think of it, is a pretty good argument for taking your kids to church every Christmas!) Otherwise, nothing much changed at church around Christmastime. I was into my 20s before I understood Advent at all. (The “Advent Calendar” in our house just let you move a candy cane closer to December 25th.) I was never in a Christmas pageant. Our church never had a Christmas Eve service. Honestly, I’m not even sure that we sang Christmas songs around Christmastime.
The reason for that, as simplistic as it sounds, is that the celebration of Christmas doesn’t come from the Bible. Neither Jesus nor the New Testament church seemed all that interested in the celebration of his birthday, and in fact we don't know that December 25th is his birthday at all. (That date came to be acknowledged through kind of a perfect storm of theology, church history, and existing pagan celebrations.) The gospel writers (two of them, anyway) describe his birth more out of interest in theology than history, and none of them ever bother to date it outside of a vague reference to historical people and events going on around it. The church didn't settle on December 25th until three or four centuries later, at the earliest.
We weren’t anti-Christmas, you understand. We just wanted to be able to point to a very specific text to support what we did in church, and Christmas just didn’t have it. Christmas pageants and decorations and special services in church seemed to us a little too liturgical, a little too tangled up in human tradition, and so we just didn’t do it.
Well, the church I’m a part of now doesn’t do much in the way of Christmas either, other than that the preaching and much of the singing during the Advent and Christmas seasons acknowledges the time of year. Some people I know still probably consider that too much. Others probably don’t think it’s enough.
I get it. But I now believe the church should celebrate Christmas because it is about incarnation. It’s about the Word of God made flesh in all its power and holiness. But it’s also about the form that Word takes — not fire or angel armies or even a holy book, but humanity. “The Word became flesh,” John wrote in his version of the nativity story, “and made his dwelling among us.” Or, as Paul put it, he “did not consider equality with God  something to be used to his own advantage; rather, he made himself nothing by taking the very nature  of a servant, being made in human likeness.” This is the Gospel, that in Jesus God has come to us as one of us, has in some way let go of what it means to be equal with God to be made in our likeness. To make his dwelling among us.
And this is just me now, I speak for no one else, but I don’t need a text in the Bible telling me to celebrate that with other human beings created by God and in whose likeness Christ has come. With other human beings who because he came now bear his Spirit and call God Father and constitute the living body of Christ on earth.
But we don’t leave that celebration to Sunday — even when that Sunday is Christmas. To celebrate incarnation is to not only look back with joy on what Christ has done, but to look ahead with anticipation to what Christ will do through us, through our hands and feet and mouths and hearts and eyes and ears and minds.

So I don’t want to leave Christmas to Santa Claus, retail insanity, or even the Spirit of Giving or peace on earth. I want to spend Christmas with the people Jesus loved so much and in whose likeness he came — so that we could be imprinted with his likeness. It’s the church who teaches me what it means to be the body of Christ, and who sends me out into the world to live with those with whom he lived.
I know he may not have been born on December 25th, that there’s no biblical text to support Christmas.


But it happened. And we must find some way to celebrate together.

Posted by Patrick Odum at 2:54 PM No comments:

“There is neither Jew nor Greek, slave nor free, male nor female, for you are all one in Christ Jesus. If you belong to Christ, then you are Abraham’s seed, and heirs according to the promise. (Galatians 3:27-28) 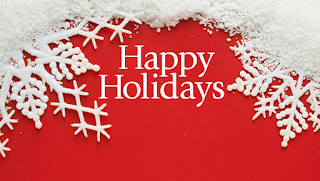 Yet with the woes of sin and strife The world has suffered long;

Beneath the angel-strain have rolled Two thousand years of wrong;

And men, at war with men, hear not The love-song which they bring;

O hush the noise, ye men of strife And hear the angels sing.

As it strange as it seems to some, I grew up in a church that didn't really acknowledge Christmas. Oh, as individuals and families we did, but never in church, simply because Christmas wasn’t in the Bible. I think that might have been an overreaction, but I mention it to point out that saying “Merry Christmas” isn’t inherently better or more spiritual than “Happy Holidays.” Or worse, or less spiritual.
But may we who believe in Jesus never forget that he did not just come for “us”. There is no War on Christmas, because Jesus chose not to fight. In Christ there is no Us vs. Them. There is only the good news of God’s love made flesh.

Hush the noise, you people of strife. Hear the angels sing.
Posted by Patrick Odum at 2:40 PM No comments:

The Spirit of Truth in a Post-Truth World

“If you love me, you will obey what I command. And I will ask the Father, and he will give you another Counselor to be with you forever—the Spirit of truth. The world cannot accept him, because it neither sees him nor knows him. But you know him, for he lives with you and will be in you.
-John 14:15-17 (NIV) 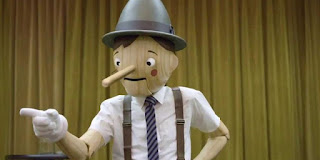 Posted by Patrick Odum at 2:32 PM No comments: