And whatever you do, whether in word or deed, do it all in the name of the Lord Jesus, giving thanks to God the Father through him. (Colossians 3:17) 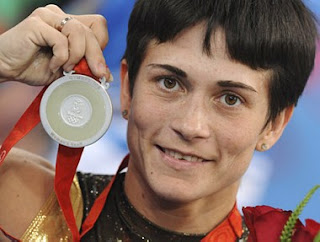 Oksana Chusovitina didn't expect to be competing in the 2008 Olympic Games. It was “been there, done that” for the gymnast from Uzbekistan. Several times.

Oksana competed in her first Olympics in 1992, as part of the “Unified Team” that took the place of the Soviet team after the fall of the Soviet Union. In 1996, 2000, and 2004 she was on the team from Uzbekistan. She was 33 years old in 2008 – absolutely a senior citizen in a sport dominated by teenagers.

Besides her age working against her, Oksana just has things other than gymnastics on her mind. Interestingly, though, it's those other things that led to her being in Beijing for one more Olympic games.

In 2002, Oksana's then 3-year-old son, Alisher, was diagnosed with leukemia. She went to doctor after doctor in Uzbekistan, always hearing the same thing: “There's nothing we can do.” Uzbeki medical facilities at the time just weren't up to par. So Oksana went outside her country, to the University of Cologne, in Germany, where she had sometimes trained. Money came in from all over the world to help pay for Alisher's treatment. He responded, and got better, and finally went into remission.

And Oksana needed a way to say “thank you” to those who had helped her.

She didn't have much – only one thing, really – to give. She was an Olympic gymnast. And so she offered to compete for Germany in Beijing.

“I don't know how to thank everyone for all their help,” she would say later. “Now Alisher is in school and he is doing fine, but we couldn't have done that alone. I compete for those people.” She said that, in fact, right after the medal ceremony in which she won a silver medal in the vault.

It was the first medal she had ever won in Olympic competition.

It strikes me that you and I share something with Oksana. We've received an amazing gift, just as she has. God has done for us something that we could never have done on our own. He's forgiven us, and saved us from death, and given us hope, and made us a part of what he is doing in the world. He's done all this through an amazing gift: he gave his Son to the world and allowed the world to do with him what it would.

And, like Oksana, we have the problem of not knowing how to say “thank you” for this gift we've received. What can we offer? What can we do? How do we show our gratitude for forgiveness and life and joy that never end? Maybe Oksana is on to something. Maybe the best way to show our gratitude is to offer what we have, what we do, and who we are to the One who has given us so much.

I'm endlessly intrigued by Paul's language in Colossians 3:17: “Whatever you do...do it all in the name of the Lord Jesus, giving thanks to God the Father through him.” Whatever you do – that's pretty broad, isn't it? Covers a lot of ground. I suspect that, if we learned to take that seriously, we would have learned pretty much all we need to know about living the “Christian life” to which the church gives so much lip service. What, really, is a “Christian life” if not the offering of every moment, action, thought, vocation, hobby, passion, talent, and pursuit as a sacrifice of gratitude to God? What is a “Christian life” if not living out every moment of every day in Jesus' name in gratitude for what he's done for us and what he will do with us?

“In Jesus' name.” We have something else in common with Oksana Chusovitina. We are not our own. Oksana isn't German by birth, of course. But when she became a German citizen and put on that uniform, she became as German as anyone else on that team. That “Deutschland”on her uniform marked her as a citizen of a new nation, and everything she did in the Olympics connected her to that nation. She's still Oksana Chusovitina, but she's chosen to give herself, at least in part, in gratitude to those who have given her a gift she can never repay. What she did in Beijing, she did in the name of Germany.

I'm afraid we don't always consider the implications when we use the phrase “in Jesus' name.” Maybe it's too often something we just tag onto the end of our prayers. But to think about doing everything we do “in Jesus' name”: well, the implications set your head spinning. To do everything in Jesus' name is to take his agenda for our own. It's to allow his priorities and values to supplant our own. To do everything in Jesus' name is to claim not a minute of your time, not a part of your life, not a piece of your heart as your own. It's to open your life to his scrutiny and live it out by his command. That's a huge commitment, to be sure, and not one that can be honored with only one decision. It works itself out over the course of our lives.

For a start, though, you can begin to imagine what it would look like if you did your work, not for the company or firm that employs you, or for your own financial security, but for Jesus. Would it change your priorities? Alter the way you spent your time? Would your interactions with your colleagues be different? How about with customers or clients? Would you work more? Less? More responsibly?

Or what might it look like if your school days were lived out in Jesus' name instead of in the name of pleasing your parents or teachers or securing admission to a better college or a higher-paying job? Would it change how hard you worked? How honest you were? How you lived with your fellow students, teachers, and administration? Would it make a difference in the goals you worked toward?

And how would it change life with your family if you were committed to doing everything at home in Jesus' name? How about friendships? How would things at church be different?

It's impossible, of course, to repay God for the gift he has given us. Thankfully, that's not what he asks. He asks us to show our gratitude simply by offering him what we have. By doing the things that we do each day in Jesus' name. While that's not always easy, it's something we can do.

So, whatever you have planned for today, whatever is on your schedule – go ahead and do it. Finish that project at work. Clean your house. Read to your kids. Take a break. But do it, do everything you do today, in the name of Jesus. Offer it to him: to his use, to his glory, to his pleasure.

I can't promise you a medal. But you'll have shown him how thankful you are for what he's given you.