Now the serpent  was more crafty than any of the wild animals the LORD God had made. He said to the woman, “Did God really say, ‘You must not eat from any tree in the garden’? ”
The woman said to the serpent, “We may eat fruit from the trees in the garden, but God did say, ‘You must not eat fruit from the tree that is in the middle of the garden, and you must not touch it, or you will die.’ ”
“You will not certainly die,” the serpent said to the woman. “For God knows that when you eat from it your eyes will be opened, and you will be like God,  knowing good and evil.”
-Genesis 3:1-5 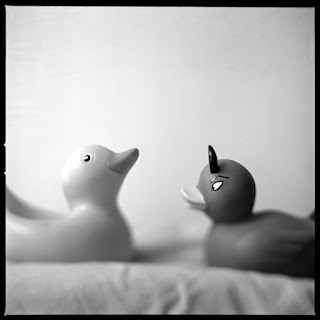 Last year’s massacre on the island of Utoya, in Norway, took the lives of 69 young people at a summer camp organized by the youth division of the Norwegian Labor Party. Anders Breivik, a right-wing extremist who opposes immigration and seems to have a hatred of Islam in particular, was arrested for the murders and is being tried this week. He does not deny that he committed the murders, but claims that they were necessary to the preservation of what he calls a “Christian Europe.”
He said at his trial this week that the killings were “based on goodness, not evil.”
Breivik’s belief that his acts were in some way “good” apparently motivated Christina Patterson, of the UK newspaper The Independent, to write an opinion piece entitled “The First Step to Mass Murder Is a Belief in Good and Evil.” Patterson quotes Breivik’s “manifesto,” compares him to other white supremacists and terrorists, and points out how the kind of violence that Breivik committed always arises out of hatred, not for others, but for self.
But then she goes on:

What all of these people have in common, apart from their hate, is a view of the world that divides it into good and evil. They like things to be simple. They want to live in homogeneous cultures where one view, which happens to be their own, prevails. When cultures change, as they all will with globalisation, they stamp their feet, and want to bend the world to their will. They can't bear their own feelings of failure, and want to feel strong.

In short, Patterson claims, Breivik killed 69 people because he believed in good and evil.
Strange, to look at something like the massacre of that many promising young lives and think that the problem is too strong a belief in good and evil.
No, Patterson had it right when she talked about hate as a cause. Fear of change. Feelings of failure and shame, and a convenient scapegoat to take the blame. He wanted his world to never change, wanted it always to conform to his perception of reality.
That was the first temptation, wasn’t it, the one the snake used to seal the deal? “You’ll be like God, knowing good and evil.” That was all it took, and suddenly the fruit of that one tree looked better than everything else in that garden combined. “Go ahead and eat, and you won’t need God. You’ll be able to determine what’s good and what’s evil, what’s right and wrong, all by yourself.”
People have been wanting this privilege for themselves since Day One. It’s how a student justifies cheating on a test, why a husband leaves his wife for another woman, how a pro-life activist decides to kill a doctor who performs abortions, why a suicide bomber detonates his vest in the middle of a crowded market. At bottom, the reason is the same: I’d like to be able to define good and evil so that I can define it in ways that best suit my worldview, my prejudices, my wants and needs.
Whenever I get to I decide what is good and evil, it will remarkably come out suiting me best. I’ll define it in ways that are most convenient to me, that absolve me of responsibility for my own life, that provide suitable scapegoats for my failures.
What’s gone wrong when someone like Anders Breivik raises a gun is not that he believes in good and evil. It’s that he believes in his version of good and evil. What went wrong on the island of Utoya that day was that Anders Breivik believed the serpent’s lie that he could “be like God, knowing good and evil.”
Good and evil, though, is something that has to come from outside of us, independent of our own prejudices, preferences, and desires. If good and evil doesn’t sometimes sit in judgment on our own values and actions, we might rightly suspect that we have them mixed up somehow. Anders Breivik apparently never allowed that suspicion to enter his mind. He was so sure that he was right, that his actions were good, he apparently never imagined that he could be wrong. He still hasn’t - he’s still convinced that what he did is “based on goodness, not evil.”
For human beings to separate out what we wish to be good, what we prefer to be good, what we want  to be good and what our passions tell us is good from what is actually, good - well, it requires divine intervention. It requires more that we sit in judgement over our own hearts instead of other people. It requires faith in God, submission to his Spirit, and a trust that he will lead us and teach us what is good.  It requires God, made flesh, living among us and showing us what a good life really looks like.
Good, in a nutshell, is following him: Doing what he did, loving what he loved, hating what he hated, and offering an empty outstretched hand to the point of a nail to right the world’s wrongs. Instead of a fist holding a gun.
Jesus shows me that whenever I turn against people in anger and hate, I’ve lost sight of right and wrong. However morally upright I may feel that I am, however certain I may that I’m in the right and others are in the wrong, to turn on people is to do evil. Loving people is a fundamental good. Only loving God ranks higher, and he loves people.
Deciding that belief in right and wrong is the problem doesn’t help. If Anders Breivik’s atrocities teach us anything, it should be we human beings aren’t up to the task of determining good from evil. It should remind us that the human heart can justify anything, slap the label of “good” or “evil” in anything. It should call us back to faith in the God who from the beginning has promised to tell us good from evil, right from wrong.
It should help us to listen to him, and to imagine that he might even use people who disagree with us to help us all see good from evil a little more clearly.
Posted by Patrick Odum at 6:50 PM