Red States, Blue States, and the Kingdom of God

“In the time of those kings, the God of heaven will set up a kingdom that will never be destroyed, nor will it be left to another people. It will crush all those kingdoms and bring them to an end, but it will itself endure forever.”
-Daniel 2:44 (NIV) 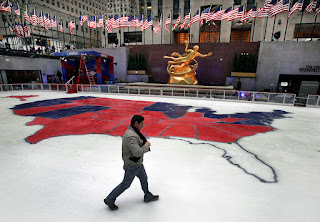 Early Wednesday morning, right about midnight in Chicago, Mitt Romney officially ended the 2012 Presidential election by (graciously) conceding to President Obama.
It was, by my count, the twelfth time in my life that the United States has peacefully elected a President.
I’m always amazed when it happens. Even a couple of elections ago, when it was weeks before we knew who won, there were no tanks in the streets. No civil war. Even when we elect a new President, the transfer of power is always orderly. In a world where peaceful transfers of power can’t be taken for granted, that’s something to appreciate, even if we sometimes forget to appreciate it.
This was a hotly-contested election. Many commentators have talked about “two Americas,” and maybe they’re not far off. Those who disagree with the President are loud, and sometimes angry, and of course they have that right. As the President himself pointed out in his victory speech Wednesday morning, that’s not likely to change anytime soon:

“Democracy in a nation of 300 million can be noisy and messy and complicated. We have our own opinions. Each of us has deeply held beliefs. And when we go through tough times, when we make big decisions as a country, it necessarily stirs passions, stirs up controversy.
“ ….These arguments we have are a mark of our liberty. We can never forget that as we speak people in distant nations are risking their lives right now just for a chance to argue about the issues that matter, the chance to cast their ballots like we did today.”

The words of a President who will have to build consensus to secure a legacy in history, yes. But they also happen to be true.
The church, historically, has always had a tumultuous relationship with civil government. Sometimes, the church has tried to be the civil government - and that’s rarely been good for either the church or the state. Sometimes the church has lived in opposition to civil government. In many places, we still do.
The American church has had a somewhat unique situation with regard to our representative government. We’re Christians, but also Americans. Voters, but primarily citizens of God’s kingdom. Like all Americans, we have concerns about the economy, or foreign policy, or jobs going overseas, or social issues. We have opinions, and our opinions translate into votes for this party or that, this politician or the other one. And yet we know that ultimately our hope is in Jesus, not in politics.
Some Christians feel called to run for office. Others to work for particular parties or candidates. In most churches, in fact, Republicans and Democrats sit side by side. Some Christians, on the other hand, feel compelled to ignore the political process, to choose to not even exercise their right to vote lest they compromise their loyalty to God’s kingdom.
The Christian Chronicle, a newspaper for Churches of Christ (the fellowship of churches of which I’m a part), included an entry in their blog this week entitled “Are Churches of Christ in the U.S. a Red State Movement?”. Three of four people in Churches of Christ, according to the blog, voted for Mitt Romney in this election, and roughly the same fraction live in a “red state”. So it would seem the answer might be “yes - Churches of Christ in the U.S. are a red state movement.”
I wonder, though, as a resident of a “blue state”, if those numbers are an accurate representation of my Hispanic or African-American brothers and sisters? (My experience would suggest that they are not.) I wonder if they accurately represent the political leanings of many believers I know who live in urban communities, as opposed to suburban or rural. (Again, my experience would suggest that they do not.)
All that’s to say that we’d best be careful - careful that we don’t assume that our opinions about “the issues,” our political leanings, are the Christian opinions or political leanings. Is someone more or less a Christian if she leans more “blue” or “red”? I would hope we wouldn’t think so, but I wonder.
I wonder especially because of a post-election Facebook experience.  A “friend” of mine (I don’t really know him, we’re Facebook friends because of a mutual acquaintance), posted Wednesday morning that he would block anyone who posted something positive regarding the election. (Blocking is basically cutting off contact with the person you’ve blocked.) This is a Christian, a brother who’s willing to be quite vocal about both his faith and his politics - and yet he’s willing to cut off people who are vocal about their own different politics - or even positive about an election he’s not happy with.
Here’s what I can’t help but wonder - when Jesus returns and all that’s left is God’s kingdom, will anyone still remember the election of 2012? Will “red” or “blue” matter in the least?
And will my Facebook friend have his own little neighborhood where only people who once agreed with his politics live?
If the answer to those questions is no - and I think it is - then let’s be careful not to confuse political parties with the kingdom of God, as though any party platform is wide enough or strong enough to support the gospel of Jesus. The political debates we might have are OK. It’s no problem to feel strongly about issues. As our President reminded us, those are the marks of our liberty. We should be thankful to our God for the freedom of political discourse.
But don’t let that discourse alienate you from a brother or sister with whom you’ll share eternity in the kingdom of God. When your argument ends, shake their hand and kiss their cheek and remember that you share a higher citizenship than any earthly nation, a higher affiliation than any political party.
Remember that there are no red states or blue states in the kingdom of God.
Posted by Patrick Odum at 4:20 PM