From Miletus he sent a message to Ephesus, asking the elders of the church to meet him. When they came to him, he said to them…
“Keep watch over yourselves and over all the flock, of which the Holy Spirit has made you overseers, to shepherd the church of God that he obtained with the blood of his own Son. I know that after I have gone, savage wolves will come in among you, not sparing the flock.  Some even from your own group will come distorting the truth in order to entice the disciples to follow them. Therefore be alert, remembering that for three years I did not cease night or day to warn everyone with tears.”
-Acts 20:17-18, 28-31 (NRSV) 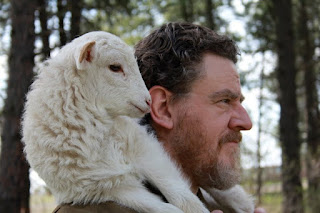 Phillip Lotter, a sheep farmer in South Africa, was having a problem with his sheep. That isn’t a big surprise, though. Sheep are nothing but problems. They can’t defend themselves very well. They can’t usually outrun trouble. They don’t seem to be all that smart, and, even worse, they have a herd mentality, which means that when a sheep mother asks a sheep teenager if he’d jump off a cliff if all his friends were doing it too, the likely answer would be “yes.”
Phillip’s big problem was that his sheep were being stolen. And so he did something about it.
Phillip developed a collar for his sheep. The collar monitors, of all things, the number of times per minute the animal stamps its foot. Normally, apparently, a sheep will stamp its foot around 5 times a minute. When it’s in trouble, though, it starts tap-dancing at a rate of about 20 times a minute. The collar picks up that abnormality and dials the owner’s cell phone. It also records GPS data to make the sheep easy to find.
Shepherding, apparently, has entered the information age. Still, technology aside, there’s something decidedly old-school about shepherding.
So maybe it’s understandable that we’d struggle with the metaphor of church leaders as shepherds. That isn’t a metaphor that corporate America uses. Corporate leaders are Executives. They’re visionaries. They set a direction and delegate responsibility and hold the people beneath them in the corporate organizational chart accountable. In a lot of ways we’re more comfortable with just borrowing those leadership concepts for church. And so some churches have Executive Pastors, a tenuous mix of leadership models if there ever was one. It borrows the executive title from corporate structures, while splicing it awkwardly to the biblical title of Pastor — which is just the Latin word for, you guessed it, shepherd.
Executive, after all, gives that archaic title of Pastor just the right modern cachet. Even without Executive pinned to it, Pastor has become mostly an honorific in many Christian circles. It denotes the most prominent leaders of a church, and is featured on business cards and letterhead and plaques on office doors. It’s roughly equivalent to Reverend or Father, in Catholic circles: Pastor Jones or Pastor Smith or Pastor Mike.
The New Testament, though, uses Pastor more to denote a function than as a title to be affixed to a names. Pastor — Shepherd — refers to the responsibility that a group of leaders, known as elders or overseers, have toward the church.
The word Elder is a holdover in the New Testament from ancient Israel, where it denoted originally an older man who was a tribal leader, and by the time of Jesus a leader of a synagogue. Overseer comes from a Greek word, which is often translated guardian. Suffice to say, the use of the three words together to describe this group of church leaders is pretty instructive. They are mature (not always the same thing as “old”), and they are concerned less with driving a church and more toward leading it, caring for it, and protecting it.
Ginny Neil, something of an expert in shepherding, says it well: “Sheep are always looking for an excuse to die.” While I think it can be kind of insulting to apply sheep metaphors too lavishly to the church, it is certainly true that most of us would have to admit to a certain amount of recklessness in our walk with the Lord, at least from time to time. Sometimes we’ll run toward any light we see, even if in doing so we run headlong into something that might kill us. That’s why we need shepherds who are awake enough to come find us and bring us back home, shepherds who are aware of their own failings and temptations, and who for the sake of the church keep themselves honest. We don’t need decision-makers and gatekeepers. What we need are leaders who are people of faith, and who will defend us and fight for us.
Churches choose their leaders in all kinds of way. We choose the leaders we prefer: bright, attractive, intelligent, dynamic, personable — we can go a long way before we even consider some of the traits that the Lord is looking for. And that’s why the church needs leaders appointed by the Holy Spirit. The church, after all, belongs to God; we don’t belong even to ourselves, and certainly not to a few leaders we set up. A church is no one’s personal fiefdom. It belongs to God, obtained at the price of his Son’s life. We don’t need leaders who set up their vision as the destination for the church, but who consistently hold up the vision of the Kingdom of God as the church’s polestar, and hold us accountable to him.
And we need shepherds who’ll defend the flock against the predators that threaten it. We need them to know the gospel, and know what compromises it. There is a tendency for church leaders to think fleas are wolves and not pay attention to the real wolves. We need leaders who are people of the gospel, people shaped by the story of Jesus, and who will pray for us, teach us, counsel us, and lead us to know and live out that story in our own lives.
“I am the good shepherd,” Jesus once said, the One who was willing even to die for the sheep, the One who knows the sheep, and who the sheep know and follow. That’s how you know a shepherd: he smells like sheep. He knows them, and they know him, and he gives his life for them


May we be thankful when we see and know shepherds like that. And may God give us more of them.
Posted by Patrick Odum at 7:29 AM