The Reports of the Church's Death Are Greatly Exaggerated -- Part 2

Though I am free and belong to no man, I make myself a slave to everyone, to win as many as possible…I have become all things to all men so that by all possible means I might save some. I do all this for the sake of the gospel, that I may share in its blessings.
-Romans 9:19, 22-23 (NIV) 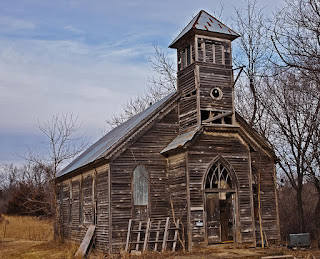 In the time and place I grew up, you could pretty much predict a church’s weekly schedule. Whatever the name of the denomination on the sign, wherever it was located, you knew that there was, of course, at least one Sunday morning worship service. Before, after, or in between there would be Sunday School. There would be an evening service, probably around 5 or 6 p.m. And there would be a midweek gathering: Bible study, prayer meeting, confirmation class — it could be called any of those things, but it would be probably Wednesday or Thursday night, somewhere around 7.
Here’s something you might not always consider: there were reasons for the development of that schedule. Sunday evening could be an alternative for those who couldn’t come on Sunday morning. The two services might have different emphases. Wednesday night would have a different emphasis yet, or help contribute to community during the week. While it sometimes seems to us that our church schedules have been handed down to us written in stone from Mount Sinai, as they were originally conceived they were culturally relevant. Someone said, “How can we best serve our church and our community? How can we best respond to the demands and needs of the world in which we live?”
Forty-odd years ago, the church I’m a part of did just that. As I understand it, the leaders of the church were pushing to have everyone involved in some kind of service together on Sunday afternoons. To make that more possible, we served lunch every Sunday, and then moved the evening service up from 6:00 or 7:00 to 4:00. That way, everyone could worship together, eat together, serve together, and then worship together again before going home.
I doubt there was ever a time when 100% of the congregation participated in that full schedule. Maybe not even 50%. But two things are equally certain. The first is that the schedule they chose reflected the values and priorities they had at the time, and that they believed best enabled them to serve the world around them. It wasn’t the same as the one they had inherited. It came about through a conscious effort to shape the schedule to fit the kind of ministry they wanted to do.
And the other certainty is that a schedule like that would probably not work in most churches today.
Is it because we’re less committed than our predecessors? Less spiritual? More selfish? Maybe, but I think probably not.
It’s just that we live in a different time and place.


I referred in my previous post to the changing circumstances in which the church finds itself. I argued that it’s those circumstances that contribute to the notion that the church is dying. But the church isn’t dying.
It’s just figuring out how to change to meet those circumstances.
I know the church seems to be in a bit of trouble, especially with our younger generations. But, see, it’s those younger generations that tend to be most firmly embedded in the changes that are happening and have happened all across our society. As we struggle to negotiate those changes, it’s no wonder that the segment of our membership that’s most affected by those changes might feel the most alienated.
So here are some cultural shifts that, in my opinion, are most affecting churches that are trying to minister in our world today. They’re traumatic because they mark the loss of some shared assumptions that have served the church well in the West through most of the 19th and 20th centuries. They require the church, in the wisdom of the Holy Spirit and the love of Christ, to change our thinking in order “to win as many as possible.”

The Availability of Information
We live with a perpetually wide-open firehose of information. Anyone, anywhere, can in seconds access much of the accumulated wisdom of the world on any topic. While in earlier ages the church was one of the major curators of information, that same information is now freely available to the masses. As such, it has less perceived value, and information alone is less likely to transform lives and change minds. We must find new ways to convince based in character and credibility gained through unselfish service free of agendas and ulterior motives.

The Loss of Institutional Loyalty
People today are less likely to identify themselves as members of institutions, be they political parties, civic clubs, or denominations. Institutions are perceived as being corrupt, driven by self-interest and the desire for self-preservation, and exploitational with regard to the people who make up their membership. Longevity is now often seen as a liability, The people who make up our churches are less and less likely to be satisfied with goals that revolve around getting more people to commit more time, energy, and money to the institution. They’re looking for genuine communities that help the people that make them up to use their talents and resources for the work of the Kingdom of God.

The Distrust of Bible Authority
“The Bible says it and that settles it” doesn’t work so well anymore. Folks know something about how the Bible has historically been used to oppress just as often as it’s been used to liberate. They want to see that our appeals to the Bible are not more of the same.

Being all things to all people requires that we understand even the points of view that we don’t share, and think and pray rigorously about how our churches might need to change to “save some.” We do this, after all, for the sake of the gospel. Communicating the good news of Jesus is always the point. In my next post, I want to suggest some ways we can begin to consider changing to better serve that goal.
Posted by Patrick Odum at 9:55 PM