When they had gone, an angel of the Lord appeared to Joseph in a dream. “Get up,” he said, “take the child and his mother and escape to Egypt. Stay there until I tell you, for Herod is going to search for the child to kill him.”
So he got up, took the child and his mother during the night and left for Egypt, where he stayed until the death of Herod. And so was fulfilled  what the Lord had said through the prophet: “Out of Egypt I called my son.”
-Matthew 2:13-15 (NIV) 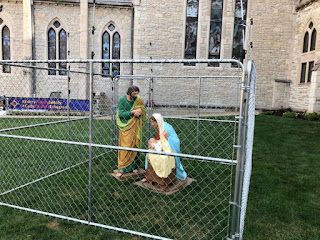 
If someone needs to break out a nativity scene a few months early to remind us, so be it.
Posted by Patrick Odum at 1:28 PM