The people walking in darkness
have seen a great light;
on those living in the land of deep darkness
a light has dawned….
For to us a child is born,
to us a son is given,
and the government will be on his shoulders.
And he will be called
Wonderful Counselor, Mighty God,
Everlasting Father, Prince of Peace.
-Isaiah 9:2, 6 (NIV) 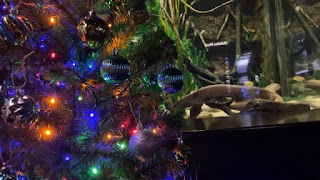 A Chattanooga, Tennessee, resident is really shining this Christmas.
Chattanooga — where, it happens, I grew up — is the home of Miguel Wattson. Miguel lives at the Tennessee Aquarium. He’s an electric eel (Watt-son…get it?), and the Aquarium is making use of his unique talents to light up a Christmas tree near his tank. The AV Production specialist hooked up some sensors to Mr. Wattson’s tank, and his shocks — which he emits when he’s looking for food — cause the lights on the tree to flash on and off with varying degrees of brightness and power speakers that create sound effects.
The Aquarium had a tree-lighting ceremony last week that they called — bad pun alert — “Shocking Around the Christmas Tree.”
One of the things I like about Christmas — and, in fact, the other holidays celebrated this time of year — is that light is an important tradition. Maybe it’s because it gets dark so much earlier this time of year, at least in this hemisphere. It’s nice, though, to drive through my neighborhood and see the lights strung on houses and bushes and trees, lighting up yards that are normally dark by 4:30.
Lights are certainly an appropriate symbol for Christmas, more so even than Santa Claus, Christmas trees, reindeer, or stockings hung by the chimney with care. Looking forward through the centuries, Isaiah saw a “great light”coming to illuminate people walking in darkness. He located that light in a child to be born, a child who would lead his people by relieving them from their oppression, taking away their burdens, turning war into peace, and establishing a new world of justice and righteousness.
I know, most of us string lights without thinking of all that. We put them up thinking that they look pretty, or that they make us feel happy, and that’s fine. Putting them up might even be just one more chore we have to check off our Christmas to-do lists, in between buying gifts and baking cookies for the office Christmas exchange.
The problem is that a symbol that no longer connects to its meaning isn’t really a symbol anymore, is it?
It’s hard to deny that something like that has happened with Christmas. Originally a feast day to mark the birth (or baptism) of Jesus, Christmas through the centuries kind of soaked up other celebrations and traditions. We sometimes decry the commercialization of Christmas in our age, forgetting that the industry built around the conglomeration of holiday traditions and gift-buying that we celebrate today arguably began in the 19th century. The early church wouldn’t have recognized the idealized Dickensian Christmases of 200 years ago any more than they would have recognized the multi-holiday winter celebrations of today. That isn’t a problem; there’s a lot about our world two thousand years later that the early church wouldn’t recognize. It’s just a fact.
Some Christians today think that we’re being persecuted if we’re not allowed to celebrate Christmas just like the Cratchetts in A Christmas Carol. But those Westernized Christmases of two hundred years ago were not necessarily any more Christian than our celebrations today.  Some Christians just choose not to be a part of the commercialization of the Holidays, effectively conceding to Santa Claus. More of us just kind of roll along with the current, putting up our trees and buying our gifts like everyone else, and occasionally remembering that, somehow, we need to “keep Christ in Christmas.”
Which brings me back, somehow, to Miguel Wattson.
If we want to keep Christ in Christmas, I really don’t think it’s going to be by going back in time to the good old days when every town square had a nativity scene and everyone said “Merry Christmas” to everyone else. Neither, obviously, are we going to keep Christ in Christmas by giving in to the impulse to max out all our credit cards and make Christmas into nothing more than a retail bacchanal. (Some predict Americans will spend $1 trillion on Christmas this year.)
To keep Christ in Christmas, look to the Christmas eel of Tennessee. Miguel Wattson is using what the Lord has given him to light his corner of the world this Christmas. If an eel can do it, so can we.
“You are the light of the world,” Jesus told his disciples. Paul called the church “the body of Christ.” The light of Christ is generated in our world — if it’s generated at all — by people who follow him. That light that dawned at his birth on all those people walking in darkness dawns in our world when Christians live like he taught us to live and are busy doing the things he told us to do. Yes, it really is that simple.
So as the Holidays begin this year, you might ask yourself what the Lord has given you that you can use to light up the corner of the world that you inhabit. It doesn’t have to cost a lot of money. It won’t necessarily come in the form of an extravagant gift, or a perfectly set table, or a stylishly decorated home. The light of Christ is best seen in the dark places, so perhaps that’s where you should let the light he’s given you shine. Shine it where people are hurting, where they’re full of sorrow and regret and grief and pain. Shine it where people are lonely. Shine it by including in your celebrations those who otherwise would be sitting alone in empty apartments or houses.
Keep Christ in Christmas by making a giving list instead of a gift list. By serving instead of being served. Keep Christ in Christmas by forgiving those who have hurt you, and by asking for forgiveness from anyone you may have injured. Keep Christ in Christmas by being an agent of peace on earth, not just a recipient. Light up  your world with acts and words that glorify God, lift up Jesus, and proclaim the gospel.
You might even create more light than Miguel Wattson.


I wouldn’t be shocked.
Posted by Patrick Odum at 4:28 PM