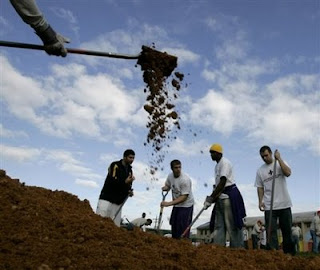 Woe to you, teachers of the law and Pharisees, you hypocrites! You are like whitewashed tombs, which look beautiful on the outside but on the inside are full of the bones of the dead and everything unclean. In the same way, on the outside you appear to people as righteous but on the inside you are full of hypocrisy and wickedness. (Matthew 23:25-28)


It was just going to cost too much and be far too complicated. That was the bottom line. It was just going to add additional expense to an already-costly project, and it just didn't make sense. So I just said, “Take out as much as you can and bury the rest.”

The concrete guys came with a jackhammer and started to break it into pieces, but it wasn't breaking into large chunks. It was coming out in small pieces. The going was slow, and the concrete guys had started to talk about maybe needing to get some heavier machinery. They dug down beside the slab, hoping to get an idea of how deep it went.

At three feet, they hit a pipe.

Water or gas, we weren't sure which. What we could see is that whoever had poured the slab had poured it right over the pipe; it ran directly through the concrete we wanted out of the ground. That meant dealing with with Peoples' Energy or the Chicago Department of Water Management, and I'd rather have a root canal than do either. Not to mention the fact that extracting this slab from the ground was going to suddenly get a whole lot more expensive.

So I told the concrete guys to break out as much of the slab as they could, then bury the rest. “Leave us enough dirt over the slab to grow some grass,” I said. Once we do, once the slab is covered and the grass is growing, nobody will have any idea that the slab was ever there. It'll look fine at the surface, and we won't have to deal with all the problems and complications down below. Everyone's happy.

And that works well enough, I suppose, when you're talking about concrete in a lawn. Once that slab's buried, it won't take long for the grass to cover over any trace of it.

It strikes me, though, that “bury it” is the philosophy that churches and church people too quickly fall back on in living with each other and their Lord.

Pharisee Flu, let's call it, in honor of some of the disease's most widely-known victims. Jesus uses colorful language to refer to them: they were like dishes that are only clean on the outside, like whitewashed tombs with beautiful exteriors that are filled just the same with corruption and death. He says that they have plenty of rules to teach, but not much energy to help people to learn and practice them. They enjoyed fame and notoriety more than God's approval, and practiced religious observance more than they did piety. “They devour widows' houses and for a show make lengthy prayers,” Jesus accused, no doubt provoking anger from the Pharisees and knowing chuckles from those who knew their ways and saw the inconsistency.

Of course, it's not as if the Pharisees are the only, or even the first, of God's people who prefer to cover over what doesn't belong in their hearts and lives instead of doing the hard, complicated, and costly work of removing it.

Unfortunately, sometimes the church is the very last place people want to tear up a patch of grass, dig down through a couple of inches of topsoil, and own up to what's really lying there just below the surface of our lives. Anger and bitterness. Pride. Lust. Greed. Conceit and self-importance. We yell at our kids and lie to our spouses all the way to Sunday school and back again. We go to church on Sunday and cheat and mistreat each other Monday through Friday, then have a couple of drinks on Saturday and start the whole process over again. From time to time we think about making some changes, but the work seems too difficult, and we fear that it will cost more than we're willing to pay.

So we bury it all, even though we know full well that we're not fooling God at all and only sometimes fooling one another.

It doesn't have to be that way, though. We don't have to live like that, with that hard, heavy, cold thing always just under the surface, always afraid that someone will gouge just a little too deep and find it. The story of God making himself known to us in Jesus is intended to “cut [its hearers] to the heart” (Acts 2:37). It's “living and active” and “penetrates even to dividing soul and spirit, joints and marrow.” (Hebrews 4:12) The gospel doesn't stay on the surface; Jesus isn't some smiling lawn jockey, some still and silent decoration that leaves what's beneath the surface in our lives and hearts untouched.

But neither does he tear into us in anger and disregard, unconcerned about what damage he might do in the process. He comes in gentleness and grace and mercy, gently scraping away the facades we so carefully build and exposing what's really underneath. And then he offers us forgiveness, and he offers us understanding, and he offers us hope that through his Spirit we can be free of what we've had buried for so long.

It's complicated, yes, and it's costly, and we'll be tempted to go on thinking that it's just easier to keep some things buried. But then we'd have to live with it, and it turns out that the things we bury don't stay that way.

The Lord doesn't ask that we have a plan for getting rid of all the stuff we've buried. If the resources to get rid of it were in us, we wouldn't need him, would we? He doesn't ask that we come with some sacrifice to appease his anger. He doesn't need our money, or even our promises of good deeds and righteous lives. What he asks for is repentance: a resolve to make some changes and the courage to expose what's buried in our hearts and lives to his power.

So let me challenge you to take stock of what you might have buried in your heart and life. What's there that you know shouldn't be, but that you just haven't wanted to deal with? Take it to the Lord in prayer, and ask for him to take it away. Take it to a brother or sister in Christ who you trust, too – God ordinarily chooses to help us through other people. And then start to think about how you can reorganize your life to work with God in removing whatever it is that needs to come out.

You probably won't even need a jackhammer.