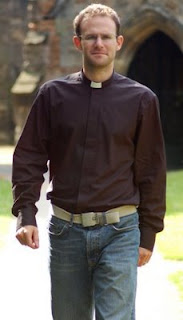 Each of you should use whatever gift you have received to serve others, as faithful stewards of God's grace in its various forms. (1 Peter 4:10, TNIV)


My college roommate's father wrote an article in The Christian Chronicle a few months ago that I truly appreciated and completely agreed with.

And I really hated that I did.

The article was titled, “No Minister? Look to God and Members Instead.” The author, David May, is a member of a small church in Minnesota. His church doesn't have a “minister” – or a preacher, or a pastor, or whatever appellation for clergy you can think of. They don't have anyone on staff to do “church work” like preaching, evangelizing, hospital visitation, and so on. Don't even have anyone to write bulletin articles. And, no, it doesn't seem like this is a temporary condition from which they're hoping and praying to be soon delivered. They don't seem to be looking for anyone, or trying to find funding for the position. They seem to have chosen, at least for the foreseeable future, to get along without “a minister.”

I know. “How are they surviving?” I asked myself. “How are they getting by without someone who has some knowledge of the Synoptic Problem or the Documentary Hypothesis or the debate about Openness Theology? How can they possibly hope to survive, let alone grow, without someone who knows how to properly construct a sermon?” Believe me, I'm as astonished as you are, but...

Well, they seem to be doing just fine, thank you.

I guess that's because when I say they don't have a minister, I mean that they don't have someone who they pay to be The Minister. It turns out that they actually seem to a whole bunch of ministers, a whole church full of them, in fact. “People step up and do what is necessary when the responsibility is theirs,” he says. “When there is a located preacher the temptation in our busy world is to hope the preacher will get it done.” He goes on:

Really, Mr. May (that's what I've always called him). You're going to mess up a good thing for me.

To be fair, Mr. May doesn't say that churches who have ministers should get rid of them. In fact, he says that churches should treat their ministers well. (Another thing I like about the article.) And I do think, as non-objective as I am about the matter, that a paid minister who loves the Lord and the church and works hard can be a blessing. Paul seemed to think so, too: he reminded one church that it's right for those who “sow spiritual seed” to “reap a material harvest.” (1 Corinthians 9:7-12) Mr. May's article, though, does make me think about whether the whole idea of a professional clergy as we know it today might just be pretty far from the biblical understanding of who the church is and what it is we're supposed to be doing.

In the Bible, God's grace isn't all about forgiveness of sins. That's part of it, of course, but God gives us much more than just mercy for when we mess up. The Bible speaks of God's grace in terms of the abilities he gives to people, as well. That's something we need to rediscover in the church, I think: as recipients of God's grace we have received not only pardon for our sins, but also abilities and opportunities to share God's love and blessings with the people around us. Some can preach, and Peter reminds the church he writes to that they should do so with words God gives them. Some can provide service and assistance, and he tells them that they should do it with the strength God blesses them with. And some have business acumen, or skill in trades, or culinary skill, or medical knowledge, or IT expertise. These are all expressions of God's grace, given in the form of talent, interest, education, and so on. And the health of the church, like the health of any organism, requires that every part does what it's there to do.

That's the very thing, of course, that the professionalization of ministry can prevent. The minister, or whatever you call him in your tradition, can too easily become the paid ministerial proxy for the rest of the congregation. He does the ministry; the rest of the church shows up on Sunday to worship, then goes back to their busy lives. Sometimes church members like it that way. Sometimes, truth be told, so do the professional ministers. Churches can grow pretty big that way, especially if they can afford to pay salaries for a lot of ministers. But they don't grow very healthy. “We mature much faster by figuring out what needs to be done and doing it than we ever would by hearing it described from the pulpit,” Mr. May writes. “If every member takes responsibility, the church will grow stronger.”

Imagine a church where members who carry a burden for visiting the sick on their hearts are at hospitals weekly or daily. Where those who are skilled administrators keep things running efficiently and smoothly, streamlining the church's ministry. Imagine a church where those skilled at carpentry or plumbing or electrical are caring for the building – and for the homes of other members and those in the church's neighborhood. Imagine a church where people who can work with troubled teenagers are encouraged and empowered to do so, or where people with musical ability can exercise their talents, or where painters and writers and other artists can work for the glory of God with their media. Imagine, even, a church where those who can speak well in public are encouraged to preach.