A Place to Kneel

Jesus knew that the Father had put all things under his power, and that he had come from God and was returning to God; so he got up from the meal, took off his outer clothing, and wrapped a towel around his waist. After that, he poured water into a basin and began to wash his disciples' feet… (John 13:3-5) 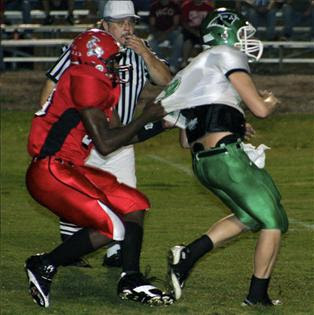 Thamail Morgan takes over football fields in Arkansas. The senior at Cave Springs High School has the kind of talent that big-time colleges look for and offer scholarships for. They were looking at Thamail last year. This season, things are less certain.

This past January, Thamail violated a team rule that left him ineligible for athletics at Newport High School, where he was then enrolled, for a year. Thamail would miss his senior football season, and college scholarship offers would dry up. So Thamail made the decision to transfer to Cave Springs, where head football coach Jon Bradley was willing to give him a shot. There were conditions, though; Thamail is required to attend after-school activities at a nearby church and meet with a pastor for counseling.

“Before I [messed] up and got myself into trouble, Thamail says, “I had some schools like Arkansas, Florida State, Ole Miss, and some other big schools looking at me Now they are not looking at me, but I have no one to blame but myself for that.” It’s got to be hard for a kid who had the world at his feet last year to suddenly find himself in such humble circumstances. But Thamail is handling it well. “So far, he has accomplished, and continues to do everything he has been asked to do, and then some,” his current coach says. “He has transitioned well and the kids here have accepted him. He is doing well in class, and is a leader on the football field and is a great athlete. We feel fortunate to have him.” Thamail has had to learn some difficult lessons, though. The kid who controls football games had to learn that there are times when he has to humble himself, listen, obey, and submit.

Cave Springs had a game a couple of weeks ago against Yelleville-Summit, a co-op football team made up of players from two small rural high schools in northern Arkansas. Yelleville-Summit’s game with Cave Springs was their first after enduring the death of one of their players and injuries to four others in a car accident. Players on both teams wore a “72” decal on their helmets – the number of the player killed, Kymball Duffy. Cave Springs head coach Bradley said he wasn’t sure how to feel when his team went up 21-0 in the first quarter. His team started telling their coach that they didn’t want to run up the score at the expense of the grieving team, so Bradley started substituting his reserves for his starters. The score was 28-8 at halftime, then 34-8 at the end of the third quarter. “Everyone was glad that they were out there playing, getting some sort of return to normalcy,” Bradley said later. “But everyone was going to be glad when it was over.”

Yelleville-Summit scored with just a little time left to make the score 34-16. Everyone lined up for the kickoff, with Bradley intending just to run out the clock. The line-drive kick bounced to Thamail Morgan. “We only have one return team,” Bradley explained. Morgan turned up field, ran past, around, and through a couple of tackles, and was at midfield before anyone knew what had happened. There was open field in front of him, and no one who could catch him behind him. But Thamail has learned some things, and of all the things he’s learned maybe the most important is this: being able to dominate a situation doesn’t mean that you have to. Redemption only happens when you learn to humble yourself, submit, listen, and obey.

At the two yard line, Thamail stopped, took a couple of steps back, and just knelt down.

It was a small thing, on a football field in Arkansas. It isn’t going to change the world. But two teams of young men will remember it and talk about it for probably a lifetime. For one team, the image of Thamail Morgan kneeling at the five yard line will in some way help them heal, maybe restore their faith in a world that took their friend. For the other team, Thamail kneeling there will remind them that there are more important things than being able to run with a football. And maybe years later, in an office or a home or on a street somewhere, they’ll remember Thamail and choose to kneel down themselves: to serve, or ask forgiveness, or forgive.

I don’t know what, if anything, Thamail’s act of kneeling on the football field will accomplish in the way of scholarship offers. Sadly, big-time college football programs don’t seem to know how to rate kindness, or care for others, or integrity. I know, though, that when Thamail knelt down he in his own way helped to bring redemption to the Yelleville-Summit tragedy. And at the very least, he showed that his own story is far from complete yet. He’s not just another jock who messed up. God’s at work in his life, and the One who gave him the talent to run into the end zone is also creating in him the character to kneel before he gets there.

May he do the same for me. May he give me the character to kneel down: to serve others, to comfort the broken, to raise someone who’s fallen, or to ask for forgiveness. We need that, don’t we: eyes to see and ears to hear and hearts to feel and minds to know when the important thing isn’t what we’re able to do in and of ourselves, but what God is able to do through us when we humble ourselves, submit, listen, and obey.

You have no idea what God might do when you kneel down. He does that sort of thing. He brings people together, or brings people into situations, and then does transformative, redemptive things through them. Sometimes you won’t know what it is that he’s trying to do. But it’s always a good habit to humble yourself, to repent, to serve, to comfort, to touch, to pray. To submit, listen, and obey.

You’re always close to God’s heart when you find a place to kneel.