Large crowds were traveling with Jesus, and turning to them he said...
“Suppose one of you wants to build a tower. Will he not first sit down and estimate the cost to see if he has enough money to complete it? For if he lays the foundation and is not able to finish it, everyone who sees it will ridicule him, saying, 'This fellow began to build and was not able to finish.' Or suppose a king is about to go to war against another king. Will he not first sit down and consider whether he is able with ten thousand men to oppose the one coming against him with twenty thousand? If he is not able, he will send a delegation while the other is still a long way off and will ask for terms of peace. In the same way, any of you who does not give up everything he has cannot be my disciple.” (Luke 14:25, 28-22) 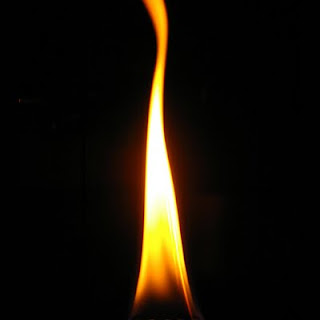 What part of “eternal” don't they understand?

Late last year, town officials in Bullhead City, Arizona, came to terms with a veterans' organization to pay for the maintenance on a park and memorial honoring veterans that the organization had financed and built. Part of the memorial is an “eternal flame” intended to symbolize the city's remembrance of the sacrifices of veterans and their families. But for most of this year, the eternal flame has been cold and dark.

In December of last year, the first month's gas bill arrived, and the city was on the hook for $961.17.

They bit the bullet through the holidays, then pulled the plug – or turned the valve, I guess – on the eternal flame.

Not surprisingly, people were upset. The city manager suggested that the “eternal” flame only be lit for holidays and special occasions, but of course that sort of misses the point of an eternal flame. The veterans say that the cost of gas for the flame had been factored into the agreement all along. Some city officials said they didn't think anyone actually realized that they'd have to pay the gas bill.

I don't know – “Occasional Flame”? It just doesn't have the same ring to it, does it?

How easy it is for human beings not to follow through. We make grand pronouncements, develop ambitious plans, dream big dreams, commit to important causes. We get married, change jobs, start diet and exercise regimens, and take up hobbies. We sign up to be part of the PTA, or serve at a soup kitchen, or support a child in a third-world country. And all these things we do sound like good ideas at the time. No one commits to something intending not to follow through.

Not always, but often enough, that's what has failed in a failed marriage. Not love, but commitment. We think commitment ends when we don't feel love anymore, but in Jesus God showed us that it works the other way around. Commitment is to love what oxygen is to fire. Feed a marriage commitment, and love will provide life, heat and warmth eternally. But if even one partner fails to live up to his or her responsibilities – well, love will wind up a lot like an eternal flame in Bullhead City.

We so easily get discouraged, tired, burned out, or distracted. Our loyalties get shifted to newer, more novel commitments. The old commitments lose their luster. Maybe we get tired of the obstacles in our paths. Sometimes it's disillusionment, or depression, or even just distance that does it. For whatever reason, we often find it easier to just bail out on the plans, commitments, and promises we've made.

Jesus knows that about us, and that's why he talks about tower architects and kings going to war. He was speaking to “large crowds” that the Bible said had been travelling with him. They thought they were his followers; after all, they followed him.

But Jesus warned them. “Who's going to start building a tower without budgeting first?” (Several developers in Chicago, it appears.) “What king would go to war against an opposing army without running the numbers and calculating win and lose scenarios?” The answer the question expects is “no one.” No king, no architect, would make such commitments without being sure they could finish what they begin.

“In the same way,” Jesus warns, “any of you who does not give up everything he has cannot be my disciple.” Understand, Jesus doesn't want to discourage anyone from following hm. But he wants his followers to be clear about the cost: if you aren't ready to “give up everything you have,” you might not quite yet be ready to follow him. He isn't trying to make us doubt our devotion. He wants us to reaffirm our commitment to him. To be willing to give up our lives.

Bullhead City has decided to redesign the flame. It will use less gas and be protected fron strong winds. They re-lit the flame in October and will leave it on for a month to monitor it. I hope it can stay lit.

I hope the same for you: that your flame will stay lit. I can tell you, though, almost certainly that it won't if you don't often re-affirm your decision to follow Jesus. It'll become an occasional flame, at best: only lit at certain times and places for people to appreciate, and quickly extinguished when it's time to go back to “real life.” It certainly won't survive when the cost seems high and the challenges difficult.

Maintaining an eternal flame for Jesus in your heart will demand patience. It will require prayer and discipline. It will be oxygenated by thanksgiving and praise, and will burn best when fanned by others who have the same fire burning in their hearts. And it won't be a one-time decision, of course: more a series of choices to keep the flame lit or let it be extinguished. There will be days when it will seem to burn low, but on those days you huddle in prayer and listen to his word and call on others and then trust in his Spirit to keep it alive. And then you'll hear a song, or a sermon, or bend low to serve, or receive service from someone else, and it will roar to life again. And then others will be able to get warm.

How's the flame? Eternal, or occasional? You know, don't you, which one burns for you in the Lord's heart?

Unless otherwise indicated, all Scripture quotations are taken from The Holy Bible, Today’s New International Version TNIV (r), Copyright (c) 2005 by International Bible Society. All rights reserved.
Posted by Patrick Odum at 9:28 AM