You are the salt of the earth. But if the salt loses its saltiness, how can it be made salty again? It is no longer good for anything, except to be thrown out and trampled underfoot.
You are the light of the world. A city on a hill cannot be hidden. Neither do people light a lamp and put it under a bowl. Instead they put it on its stand, and it gives light to everyone in the house. In the same way, let your light shine before others, that they may see your good deeds and glorify your Father in heaven. (Matthew 5:13-16, TNIV) 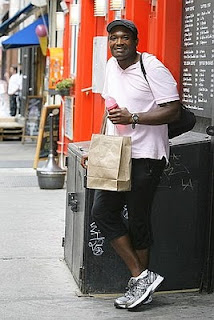 Merrie Harris didn't intend to shatter preconceptions. She just wanted to help someone.

Jay Valentine didn't intend to subvert any stereotypes. He just asked for some help.

Both of them, though, probably made a lot of people think differently about a lot of things. Maybe they will you, as well.

When a homeless man approached Merrie, a New York City ad executive, in a SoHo cafe last summer and asked for money, Merrie realized she had no cash to give him. She did, however, have an American Express credit card. And, without any more than momentary hesitation, she handed it over to him and asked that he bring it back when he was finished.

Friends and bystanders told her she was crazy, that she'd never see the card again, that she should cancel it immediately. All Merrie said was, “Are we only supposed to trust people we know?” So she wasn't surprised at all when the homeless man, Jay Valentine, returned the card.

Jay also brought her a receipt for the total he charged to her card: deodorant, body wash, water, and cigarettes.

When asked if he was tempted to take advantage of Merrie's generosity, Jay, a former real estate agent who has been homeless since he lost his job a few years ago, said no. “I wasn’t tempted at all. She trusted me, and I didn’t want to violate that trust. I would never do that.”

“It sets a good example that people in need – like I am or worse – can and should be trusted.

I wonder how many people a day Jay asks for spare change. And I wonder what most people say, or think, when he asks. We tend to assume the worst, don't we? We tend to think homeless people are homeless through some fault of their own. If we pass them by, it's often because we tend to assume they can't be trusted to use what we give them as we think they should. If we help, it's usually with the nagging thought in the backs of our mind that the spare change we give them will have turned into a bottle of Night Train by the end of the day. Sometimes trust is hard to come by, especially the kind of trust that Merrie showed.

Jay demonstrated, though, that at least sometimes when you trust people – even people in the most difficult of circumstances – they vindicate your trust.

And Merrie – well, Merrie blew up a neat stereotypical category herself. She didn't demonstrate the greed and self-interest that we sometimes associate with successful corporate executives. She showed how generous successful people can be.

OK – a reality check: There are some people who you couldn't trust with your credit card. Thing is, those people aren't always homeless, and in fact they sometimes live in the nicest homes in the nicest neighborhoods. As Jay showed, “poor” doesn't always equal “addict” or “criminal.” And sometimes, the very thing those who are poor need is the one thing it's hardest to get: trust. Sometimes the only thing that might lift someone out of a bad situation and into a better one is for someone to believe in them enough to take a risk and give generously.

When Jesus calls his followers the “salt of the earth” and the “light of the world,” it isn't because he sees us as morally, ethically, spiritually, or intellectually superior to the people around us. It comes at the end of what we know as the Beatitudes, where Jesus calls “blessed” those who will subvert their natural reactions and knee-jerk responses enough to trust in the coming Kingdom of God for things like wealth, comfort, power, joy, justice, and peace. And it comes right before a long section where Jesus tells us to act with uncommon generosity, trustworthiness, and love toward the people around us. Being light and salt, in short, is less about our own personal piety and more about how that personal piety changes the way we act toward the people around us.

What he calls us to, I think, is living lives that anticipate the kind of world that God is busy bringing into existence. And to the degree we do, he says, people might get the chance to see what that world is like and what that God is like and worship him.

Maybe the most valuable currency we can give the people around us is trust – trust that they will receive our generosity and do right with it. And sometimes they will, and sometimes they won't. That's why it's such valuable currency: It costs something to give it. We will never be the salt and light Jesus wants us to be, we will never be able to live lives that anticipate the joy and justice and peace and love of the Kingdom of God, if we aren't willing to open ourselves to being disappointed, taken advantage of, and even hurt. Jay could have taken Merrie's card and caused her all kinds of pain and trouble. And that's exactly the reason her gift meant so much.

We should know, because of course we've received such a gift. God gave us his Son, and Jesus gave us his life, without requiring any guarantees as to what we would do with that gift. Jesus gave all he had to give without protecting himself at all. As recipients of his generosity, we should know how to do that too.

Isn't there someone in your life who needs you to give generously of the most valuable currency you have – your trust? Someone who needs to see in you the anticipation of the Kingdom of God? Maybe it'll require your credit card, but it will certainly require more. It will require that you care, and that you make yourself vulnerable, and that you know going in that it may even hurt.

But don't let the difficulty of it discourage you. Because that kind of thing can change a world.