But you have come to Mount Zion, to the city of the living God, the heavenly Jerusalem. You have come to thousands upon thousands of angels in joyful assembly, to the church of the firstborn, whose names are written in heaven. You have come to God, the Judge of all, to the spirits of the righteous made perfect, to Jesus the mediator of a new covenant, and to the sprinkled blood that speaks a better word than the blood of Abel.
See to it that you do not refuse him who speaks. (Hebrews 12:22-25) 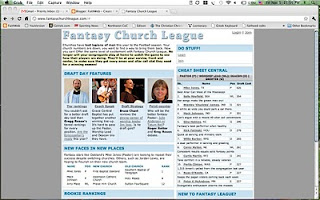 My son and I have a fantasy football team this season - the Odum Titan Steelers. Maybe you're familiar with fantasy football – it's become something of a phenomenon, with millions of football fans worldwide joining leagues. It's pretty simple to play; you join a league online, draft a team made up of actual NFL players, and then use their game statistics each week to determine your score.

It's nothing like playing football in real life, of course. And it's nothing like actually owning or coaching a team. It's a fun way to make NFL games that you might not otherwise care about more interesting. It gives you something of a rooting interest where maybe you wouldn't have had one. It gives you reason to get more immersed in the statistics of a particular season. Some people get pretty competitive about it, usually because they play in a league where actual money is at stake. But for Josh and me – and most fantasy football players, I think – there's nothing real about it. That's why it's called fantasy football.

You might not know it, though, if you were with us watching a game where one of “our” guys is playing. At any given moment, we might be yelling at the coach to give “our” guy the ball near the goal line. Or we might be bemoaning a dropped touchdown pass, or cringing at an interception that hurts “our” quarterback's stats. Though we have no investment whatsoever in the players and coaches on our TV screen, we sometimes act as if we do. Though it won't really matter much to us one way or the other if our team ultimately wins or loses, for some reason we sit in our living room and criticize coaching decisions and player performances that we'll shrug off five minutes after the game ends. Such is the nature of fantasy football.

It makes me wonder if there might be such a thing as fantasy church.

Stay with me here. I wonder how many Christians are roughly as involved and invested in a church as Josh and I are in the NFL. We’re sort of brainwashed, after all - by history, by habit, by churches, even - to think of church as another organization to join. We keep our church directories in the drawer with our PTA membership lists and the address and phone number sheets from our kids’ soccer teams, and maybe church occupies the same drawer in our minds as PTA’s and soccer teams. That being the case, it shouldn’t surprise us if our usual experience of church is about as close to the reality of church as the Odum Titan Steelers are to a real NFL team.

We sit on the sidelines and watch, instead of actively participating. After all, it’s the leaders, the long-time members, maybe the largest contributors that make the decisions, right? Teaching is best left to the professionals, or at least to those who know the Bible best. Service, ministry - well, we just don’t have that kind of free time. Fellowship, real relationships, really being a part of the lives of other Christians - we already have friends, and don’t have the time, the room, the emotional energy for more.

So we content ourselves with fantasy church. We show up at worship - once in a while. We criticize decisions and take notice when someone messes up. We celebrate from time to time, when there’s reason. But then we shrug off everything that happens and go back to our day-to-day lives, largely unaffected by it all. We have little investment, little connection, and so there’s little reason, honestly, for us to care one way or the other.

Ultimately, what difference does fantasy make? It isn’t real, and life is real. Our problems are real. The decisions we have to make, the priorities we have to set - those are real. Fantasy, well, it’s fun for a while, but in the end it’s just an empty entertainment.

That’s why I love the way the anonymous writer of the book we call “Hebrews” describes church. His potent images are a corrective to fantasy church, a radical rebuttal to the notion that church is to be experienced from the sidelines. He says that church isn’t about coming to a building once a week to listen to a lecture. It’s about living life in God’s city, with celebrating angels, other people who have a place in heaven, and in communion with even the faithful who have gone on before us. For him, church is a parting of the curtain, a glimpse of and participation in the new world that is surely overtaking the old one. It’s a new relationship with God, sealed with the blood of Jesus. It’s the receiving of “a kingdom that cannot be shaken.” And so, he says, “let us be thankful, and so worship God acceptably with reverence and awe.” (Hebrews 12:28)

No fantasy church there. Which hopefully leads us to realize that, to the degree that our limited experience of church doesn’t look like his and doesn’t lead us to be thankful and worship God with reverence and awe, perhaps something is wrong.

The church is people. Not the building, not the structures of leadership, not the programs. We make the church what it is, not they - whoever we may think “they” are. Which is why the writer of Hebrews draws some shockingly mundane conclusions: Treat each other as family. Show hospitality to strangers. Remember those who are mistreated and forgotten. Value marriage. Imitate the faith of those who have gone before. Profess the name of Jesus. Do good and share. Submit to leaders.

Point is, church isn’t experienced and lived from a couch, watching others. Church is us, together, thankful for the kingdom we are receiving through Jesus, worshipping God, and treating each other like a loving family. Being part of the church demands that we get off the couch and stop being satisfied as spectators with no real investment. It demands that we give up fantasy church once and for all.