Play Misty For Me

Now listen, you who say, “Today or tomorrow we will go to this or that city, spend a year there, carry on business and make money.” Why, you do not even know what will happen tomorrow. What is your life? You are a mist that appears for a little while and then vanishes. Instead, you ought to say, “If it is the Lord’s will, we will live and do this or that.” (James 4:13-15) 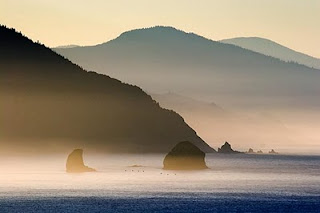 This week, on the same day, two families I know said goodbye to parents.

In one of the families, middle-aged siblings gathered with their mother to comfort each other in the sudden death of their father. He was older, and had been experiencing some health problems, but his passing was still a shock for them.

In the other family, there was only one child, a fifteen-year-old daughter. With her father, her grandparents, two aunts, and some friends from school, she mourned the sudden loss of her mother. She was much younger, and there was no warning – in the time it takes a heart to stop, this girl's life changed completely and irrevocably.

Such different situations. While death almost always leaves grief in its wake, one of those losses probably seems to you even a little more tragic than the other. It's one thing to lose a parent in middle age – it's even something we expect. It seems much different to lose a parent as a teenager. There's more to grieve, somehow: not just the loss itself, but the moments and events and time together that's lost as well. Such different situations in so many ways.

So alike in one way. One fundamental way.

Both families were shocked and caught off guard. Death is particularly good at sneaking up and surprising us, and neither family knew it was nearby. I think that's a good thing, actually; I can't imagine that always anticipating the death of the people we love – or our own – would be any way to live. Who'd want to live with an hourglass attached to your forehead, or a countdown clock implanted in your palm? And who'd want to see the sands running out or the minutes counting down on a parent or a spouse or a friend or a child?

The surprise with which death comes can often be a great blessing, I think – as shocking as it may be when it happens. It prevents us from being preoccupied with death, from focusing so disproportionately on life's end that we fail to see the beauty and joy in each day.

But it also means that we're prone to living as if death doesn't exist.

When we live that way, we also fail to appreciate life. But for the opposite reason. To live as if we and the people we love will live forever, to fail to recognize that there is a horizon to our lives, is to devalue the present. When we don't acknowledge our mortality, we imagine life as an endless vista of attainment and achievement. “We'll go to this or that city, spend a year there, carry on business and make money,” James pictures us as saying. And he rebukes for our foolish assumptions, for the arrogance of believing that our futures will unfold in exactly the way we imagine and plan. We should know better, seeing as how all around us is testimony to our mortality. And yet somehow we don't.

“Mist.” That's what James calls human life. Mist, of course, is already in the process of evaporation. And so are we, whether we want to acknowledge it or not. We appear for a little while – 80 or 50 or 30 years, or whatever – and then we're gone. We don't know how long we have, but we know there's an expiration date.

So how do we live with the knowledge of our own mortality without obsessing over it? James suggests that we live an “if the Lord wills” sort of life. Make your plans, he says – just make sure to leave room for God to cut them short. You can schedule that business trip, but scheduling and making it are two different things, and you're not in control of the variables. Buy your plane tickets, set your wedding date, take care of your health, pay your insurance premiums, plan to dance at your granddaughter's wedding: but just know that you may be with your Father before the flight leaves or your granddaughter walks down the aisle.

I've known people who affixed the words “Lord willing” before nearly everything they said about future plans. Truthfully, I used to think that was a little excessive. I'm not as sure now, though. Now, I think maybe those folks are testifying to the fact that ultimately it's God who's in control of our lives – beginning, middle, and end. The more I think about it, the more I like the idea of affirming, out loud, that the plans we make, the futures we imagine, are firmly in his hands.

So while you have today, make it count. Tell the people you love how much they mean to you. Better yet, show them. Do something that will make a positive difference in someone's life. Listen to someone who's hurting, pray with someone who's afraid, help someone who needs it. Look around you and thank God for all the blessings you have, before you rush right in to telling him what you want. When you make plans for tomorrow, ask for God's guidance. And when those plans are “final,” remind yourself that there's really nothing final about them until God says so.

And resurrection surprises death even more.

Unless otherwise indicated, all Scripture quotations are taken from The Holy Bible, Today’s New International Version TNIV (r), Copyright (c) 2005 by International Bible Society. All rights reserved.
Posted by Patrick Odum at 10:27 AM