Therefore keep watch, because you do not know on what day your Lord will come. But understand this: If the owner of the house had known at what time of night the thief was coming, he would have kept watch and would not have let his house be broken into. So you also must be ready, because the Son of Man will come at an hour when you do not expect him. (Matthew 24:42-44) 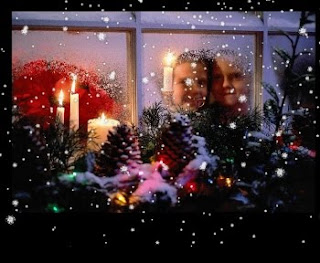 I can still remember it clearly: sitting on my bed in the darkness, looking through the window into the night sky, hoping to catch a glimpse of him. My sister was sleeping in the bottom bunk, so I think my grandmother must have been there and sleeping in her room. But she was asleep, either convinced by the song that “he knows when you've been sleeping, he knows when you're awake” or just worn out from the excitement. But I was older, more worldly, at 6 or 7. I didn't think he could possibly keep track....

So there I sat, as Christmas Eve 1974 or 75 turned to Christmas morning. At some point, I'm sure, I gave up and fell asleep. But I kept my vigil as long as I could, hoping to see him. It wasn't a foggy night, so I didn't know if he'd have Rudolph in the lead. We didn't have a chimney, so I didn't know if he'd land on the roof or in the back yard, near the door that Dad promised to leave unlocked. But I knew I'd see him. All I had to do was stay awake. (I guess it didn't occur to me that he might come from one of the three cardinal points of direction that the window I was staring through didn't face. Come on, people. I was 6 or 7....)

In the intervening years, I've gone from staying up late to see Santa, to staying up late to put together toys, to getting up early with a young child who was just as excited as I had been, to trying to figure out what to buy a son who's just on this side of the teen years. I've learned some things about Christmas. One is that you never see Santa coming, no matter how late you stay up. And that if you sneak downstairs and see Mom kissing him, then either Dad has a Santa costume or there's something that he needs to know. I've learned that we're supposed to grow out of our childish preoccupation with new stuff, and that sadly a lot of us never do. I've learned that those of us who do outgrow it usually only replace it with a preoccupation with what we're going to give this year, or depression when we discover that this year won't be the perfect Christmas either. I've learned that the most important things about Christmas have nothing to do with shopping and can't be found at a mall.

And I've learned that I was waiting for the wrong person that night.

Not that there's anything wrong with Santa Claus, the Church Lady notwithstanding. He has the sleigh, and the elves, and he brings the presents. He has a lot going for him. But, at the risk of a lump of coal in my stocking, I have to state the obvious: it's Christmas, not Santamas.

It's true, of course, that the Bible doesn't mention Christmas, and one way to avoid obscuring Jesus with the commercialism and consumerism of the season is simply to declare Santa the winner and enjoy the Holidays for what they are. Or ignore them altogether. But functionally, abandoning Christmas to the retailers robs Christians of an obvious opportunity to witness to the gospel. At a time when the people of the world come from near and far to worship at the House of the Lord and Taylor, the one thing those of us who believe in Jesus should under no circumstances do is mute our voices and march in lock-step through the check-out lines.

Jesus was born at a crossroads of hope and anticipation. He was born when people were waiting, waiting for they knew not what, and arguing and fighting about their different ideas of what that hope looked like. For some, it was renewed personal piety. For others, a strong Roman emperor. Some looked for a renewed Jewish nation led by a rightful king of the House of David. Some waited in the desert for a coming apocalypse that would purify the people of God and leave the righteous in charge. Different visions, but everyone was waiting.

And it's not so different now. Everyone is still waiting, and now, as then, what they're waiting for is Jesus. Even those who don't know it. “The hopes and fears of all the years are met in thee tonight,” the song rightly says; but it's the church who knows it best. And that's why Jesus left us with the promise of his return and instructions to “keep watch” and “be ready” in the meantime. Because he's coming to finish the work he began, and because he's left the church with the task of witnessing to his work with our words and actions.

He doesn't call us, though, to sit and watch through the windows. Being ready means being busy doing his business with what he gives us. It has a lot to do with whether or not we notice the conditions in which “the least of these” have to exist and do something to alleviate their suffering. Sometimes in church we give the impression that being ready is all about asking Jesus into your heart, or being baptized, or prayer, or communion, or personal holiness. Jesus seems to assume those things; for him, being watchful has to do with speaking the words he would speak and doing the things he would do in the dark and waiting world around us, in order to clarify just what it is they're waiting for.

I like that the church is figuring this out. Whether it's turning Black Friday into Buy Nothing Day http://www.buynothingday.org/, or Advent Conspiracy's efforts to give Christians an alternative to overspending during the Christmas season, or a hundred other efforts in a hundred places, followers of Jesus are learning what it really means to wait expectantly for his coming.

In this time of waiting, may we remember who we're waiting for. And may our lives be watchful, and may we be witnesses to the gift that God gives in Jesus: “so God imparts to human hearts the blessings of his heaven.”