Face the Mirror and Face the Music

Produce fruit in keeping with repentance. And do not begin to say to yourselves, ‘We have Abraham as our father.’ For I tell you that out of these stones God can raise up children for Abraham. The ax is already at the root of the trees, and every tree that does not produce good fruit will be cut down and thrown into the fire.”
“What should we do then?” the crowd asked.
John answered, “Anyone who has two shirts should share with the one who has none, and anyone who has food should do the same.”
-Luke 3:8-11 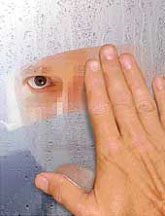