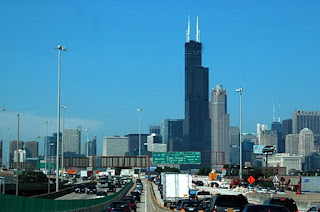 Please pardon me if I seem a little stressed out. I really can’t help it. After all, I apparently live in the third most stressful city in America.
Yes, this week Chicago was named in an article in Forbes magazine as the third most stressful place in the United States to live. Forbes based their evaluation on several factors, including air quality, unemployment rate, the cost of housing and gas, traffic congestion, and population density. Chicago scored high enough in all these categories to push our lovely city past Detroit, San Francisco Philadelphia, and Dallas and claim the title of Third Most Stressful Place in America. Only Los Angeles (#1) and New York (#2) were rated as more stressful than the Windy City.
Forbes says that Chicago has the worst traffic congestion in the nation, with commuters spending 70 hours a year in traffic jams. (I never sit in traffic as I commute to work; then again, I live across the street from my office....) We have an unemployment rate of 10.3%, and we’re the fourth most densely-packed city in the nation.
We also have the Cubs.
On the plus side, we have deep-dish pizza. And the Blackhawks. (Though Wednesday night’s 3-overtime win in Game 1 of the Stanley Cup finals might have actually ratcheted up our stress levels.)
Funny thing, though. I’ve lived in Chicago for over twenty years and, aside from a little high blood pressure, I’m in pretty good health. You’d think all that time living in the most stressful city in America would have taken more of a toll. In fact, I know lots of people who live in other places who seem to have at least as much stress in their lives as I do, if not more. And I’m sure there are places in other parts of the world that make Chicago look about as stressful as a quiet tropical island.
Though we use it to refer to almost anything that makes us worried or anxious, the word stress originally described “the non-specific response of the body to any demand for change.” In other words, stress is the set of general symptoms we feel when things don’t go as we planned and we’re forced to adjust on the fly. If that’s what stress is, then I think we’re left with an inescapable conclusion.
We can’t avoid stress.
If stress is the body’s response to any demand for change, then short of having absolute and complete control of your life, and the lives of those around you, stress is inescapable. Stuff will happen to you that you hadn’t planned for. Stuff will happen to you that you might have planned for, but sooner than you planned. Stuff will happen to you that you planned for, and you’ll find that your plans don’t cover it. Or if it’s not you this week, it will be someone you love, and that person’s stress will cause you stress.
We might as well recognize the stress we feel for what it is: a biological reaction to the upsetting of our apple carts, be it a lane closure or a foreclosure, the birth of a baby or the death of a parent, starting a new job or getting fired, marriage problems or dating problems. Something happens that demands change, or adaptation, or fight, or flight, and our bodies amp up the energy level and take stock of options. Not just in Chicago, or even especially in Chicago. Anywhere. Everywhere.

I think a lot of what we call stress is really worry, and what we usually worry about are the things we can’t do much else about. Somehow, though, we seem to be under the impression that by obsessing over it and fretting about a problem, lying awake all night turning it over in our heads, and driving everyone we know crazy endlessly retelling and rehashing it, we can somehow solve it.
That’s why we don’t like it that Jesus seems dismissive of the things that stress us. “Don’t worry,” he says, and being wired the way we are it’s little wonder that our knee-jerk response is something along the lines of, “Yeah, right.” But don’t tune him out, because what he suggests is that worry is a theological problem. We worry, he claims, because the God we believe in isn’t powerful enough or loving enough or concerned enough to watch over us. Thankfully, he reminds us that the God we’re supposed to believe in is our “heavenly Father,” and that he cares for his children.
Jesus suggests that we learn some life lessons from the birds and the grass. Neither are strong in the area of strategic, long-range planning. Yet, by and large, God cares for them. The birds seem to have all they need to eat. The grass is clothed in flowers as bright as the finery of a king. They go about their business, they do what they do and live their lives, and God cares for them. “Are you not much more valuable to God?” Jesus asks us – who are made in his image, shaped by his hands, animated by his breath. “Don’t you think your Father in heaven will care for you at least that well?”
Worry, Jesus says, is the response of pagans to a world that’s out of their control. The response of believers is faith in a God who knows exactly what we need and is happy to provide it. The response of believers is prayer: to give thanks for his care in the past and ask for it to continue in the present and future.
Instead of worry, Jesus suggests that we focus our energies on seeking God: his reign over our hearts and lives, his righteousness lived out in what we do and say. It’s kind of a nice way, I think, of telling us to just try to do what God says and be the people he made us to be, and leave the planning to him. That’s scary, for some us. For all of us, to an extent. Then again, there’s something attractive about it, too. To live with joy and expectation and trust, instead of anxiety, worry, and gloom?
We can. We have every reason to live that way. Leave worry to those who don’t know our Father in heaven. That’s not for us. The God we know cares for the birds and the grass and loves us even more. So much, in fact, that he didn’t even withhold his Son from us. Trust his power and love, seek his presence and his will above everything else, and you’ll be ready to deal with any kind of stress life may have in store for you.
Why, you might even be able to live in Chicago.