Therefore, since we are surrounded by such a great cloud of witnesses, let us throw off everything that hinders and the sin that so easily entangles. And let us run with perseverance the race marked out for us, fixing our eyes on Jesus, the pioneer and perfecter of faith. For the joy set before him he endured the cross, scorning its shame, and sat down at the right hand of the throne of God. Consider him who endured such opposition from sinners, so that you will not grow weary and lose heart...
Endure hardship as discipline; God is treating you as his children. For what children are not disciplined by their father?
-Hebrews 12:1-3, 7 (NIV) 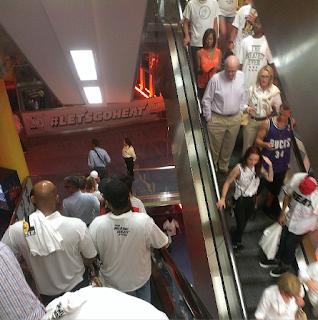 Tuesday night, one of the greatest games in the history of the NBA Finals was played.
And many fans of the winning team missed the best part.
The Miami Heat trailed the San Antonio Spurs by 5 with 30 seconds left. Up 3 games to 2 in the best of  7 series, San Antonio was 30 seconds away from an NBA championship. It looked bad for the Heat, playing at home in Miami. The crowd, which had been into the game all night, was quiet.
It might have had something to do with the fact that a lot of them started for the exits.
Earlier in the fourth quarter, Miami fought back from 7 points down. They actually led by 3 with 2 minutes remaining. But the Spurs went on a little run, and Miami found themselves on the wrong end of the score with not much time to come back. And, evidently, a significant number of fans thought they didn’t have another comeback in them.
Of course, now we know they did. Chris Bosh grabbed a key rebound off a LeBron James miss, whipped the ball out to Ray Allen, who had set up perfectly behind the 3-point line. Allen drained the shot to force overtime. Miami went on to win the game, 103-100, and force Game 7.
Which, we also know now, the Heat won to take the Championship.
Which, you know, makes those fans who left look kind of bad. You know they went to the office the next day and talked about how loud it was in the arena when Allen tied the game.
In fairness, though, what we’re talking about is a basketball game. Those folks who left are kind of being savaged in the media right now as bandwagon fans, and maybe they are. But if you pay anywhere from $400 (standing room) and up for a basketball game, and you want to leave early to beat the traffic or grab a late dinner, that’s your call.
If, though, you were there on someone else’s dime, and they wanted to stay? Well, hopefully you’d be good enough to stick around.
“Endurance” probably isn’t one of our favorite words. After all, we don’t usually talk about “enduring” an afternoon nap, or a massage, or a vacation at a tropical resort. We don’t “endure” a raise at work, or a new house, or a 75-degree sunny day. We endure the difficult, the harsh, the painful. Endurance goes with sweat, blood, and tears. It goes with work and pain and hardship. We endure a traffic jam, sure, or a particularly harsh winter. But even traffic jams are first-world problems. And a harsh winter is much more easily endured the way most of us do it - in a heated, insulated house, with plenty of warm clothes and a reliable snow-blower available.
No, endurance for crushing poverty.
Endurance is for debilitating disease.
Endurance is for hunger, for the ever-present threat of violence, for righteousness in the face of injustice and love in the face of hate. Endurance is turning the other cheek to those who would strike you. It’s bending the back and submitting to the lash. It’s choosing not to respond to lies and false accusations, even with the truth.
There have been believers in Jesus all through the centuries for who endurance was always a necessity. There are still plenty living today. Just because that's not our experience in the Western world - where truth is regarded as relative and religion as too private to be persecuted - doesn't mean that millions of our brothers and sisters all over the world aren't living every day under the pressures of exclusion, discrimination, imprisonment, and death.
And it doesn't mean that we don't need endurance in our faith.
The fact is that there are countless ways in which the daily pressures of life and our own fears and doubts speak against the promises of the gospel and undermine its call on our lives. The pretty, shiny things around us distract us and tempt us to put aside character and integrity. The wounds of living in a fallen world cry out for comfort and lead us to find it wherever we can. People reject us and mock us for our faith. The demands of the gospel sometimes seem hard and unreasonable.
Jesus knows. Endurance was part of his experience too. He endured insult, and mockery. He endured his own fear and doubt and pain. He endured a cross, endured the shame of it and the horror of it. He endured because of “the joy set before him.” He endured because he knew something those Heat fans didn’t. He remembered something we often forget.
Victory is sure.
It’s sure because God endures, too. “His love endures forever,” says the psalmist, literally with every breath. He endures our fear and doubts. He endures our tendency to wander away toward everything that promises to ease our hurt. He endures our selfishness and greed. His love endures forever. And it, too, endured a cross.
And because of his always-enduring love, through Jesus victory is sure. We’re here on his dime. He paid the cost. He endured, and it’s not too much for him to ask the same of us.
Those Miami Heat fans who left the game early? Some of them heard what happened. On their way to their cars or whatever, they heard that their team had tied the score and that the game was going to overtime. They heard, and they turned around and went back to the arena.
Only to find the doors closed and locked from the inside.
They knocked. They pleaded. They indignantly announced the prices they had paid for their tickets. But the guards pointed to the the large “No Readmittance” signs and refused to allow them back in.
They didn’t endure. And so they missed the best part. They missed the victory.


May that not be our experience. May we endure in our faith, in our love for the Lord, in our trust in him even when everything around us is going wrong. Even if everyone else has gone home, may we endure to the end. Because the day is coming when endurance will be a thing of the past. When celebration will be the future. Forever.
Posted by Patrick Odum at 5:01 PM