“The time has come,” he said. “The kingdom of God has come near. Repent and believe the good news!” 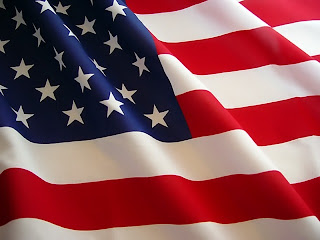 An ex-professor of mine had a problem with the Pledge of Allegiance. Specifically, he had a problem with his kids reciting it along with the rest of their class in school each morning.
His kids, though, understandably didn’t want inordinate attention drawn to them. They didn’t necessarily want to have to explain over and over again why they didn’t say the Pledge like everyone else. So he had a novel suggestion. He told them that while everyone else was reciting the Pledge, they should should recite the Apostles’ Creed. (Try it. It takes about the same amount of time, if you recite the creed pretty quickly.)
Honestly, I kind of thought my professor’s attitude was kind of extreme. I never told my son he shouldn’t say the pledge, and since he’s grown up in a non-creedal church, I doubt he knows the Apostles’ Creed. But I do understand, I think, what he was trying to teach his kids in the process. He was trying to teach them that their highest allegiance shouldn’t be to any flag, or to the country it represents. He wanted them to remember that their allegiance was to the kingdom of God. (Even if I suspect that his extreme attitude came more from his politics than his theology.)
There’s never been a time in the church’s history that we haven’t had to struggle with dual citizenship. Every believer in Jesus has been a citizen of some nation or kingdom or realm on earth, as well as a citizen of God’s kingdom. And every believer has had to deal with the conflict that those allegiances bring. Acclaim Caesar as lord, or Christ? Serve in a nation’s army, and be called on to kill in the name of defending that nation? Support a government that utilizes the suppression of human rights and even genocide to remain in power? Vote for a candidate that advocates harsh policies toward immigrants, or one that supports gay marriage?
And even if we navigate those black and white questions in a way that we can live with, the question of allegiance keeps coming up. When the national debate on immigration, for example, turns on zero-sum arguments about keeping American prosperity “for Americans”, what does an American who believes in   the unlimited prosperity of God’s kingdom say in response? When national health care sharply divides us, what do those of us who believe in the primacy of a kingdom where the sick are healed and preference is shown to the poor say? When corporations are the engine of our economy, and the way to a healthy fiscal future seems to lie in policies that favor the corporations, what of those of us who believe in a kingdom where “the last will be first and the first will be last”?
We’ve been all over the map in responding to these questions. Some believers have risen in rebellion against governments that didn’t, in their view, adequately express the priorities of God’s kingdom, to create other governments that operated on their understanding of the kingdom. (Often, ironically enough, persecuting fellow believers who saw things differently.) Others have assumed that, since God raises up secular governments, the most Christian position relative to government is always submission. Somewhere between those two extremes is where most of us live and work out our questions of allegiance.
Here in America, we can practice our faith - or lack thereof - with relative freedom. Our system works hard to keep church and state separate, and my own opinion is that’s for the best. (It’s never been good for the church to be too cozy with the powers-that-be.) With some exceptions related to taxation of churches as corporations, faith doesn’t occupy a privileged position in our country. Neither is our government hostile toward faith; in fact, our government tends to recognize that faith is an important part of the lives of many Americans. Our government is simply structured in a way that keeps faith in the private sphere - that part of our lives into which the government tries to intrude as little as possible.
The downside of that arrangement is that it’s pretty easy, as American Christians - or Christian Americans - to keep our political opinions and assumptions from having much contact with our faith. And so sometimes we wind up with political and nationalistic allegiances that ought to be mutually exclusive with faith in Jesus - yet we fail to see the conflict.
So, just some random thoughts on Independence Day:

I’m thankful that I’m an American. That’s not because I think that Americans are somehow superior to other people. It’s not because I don’t recognize the problems that we have. (We have some big ones.) It’s not because I’m under the illusion that America is the only country that cares about freedom and human rights, or that I think we have a spotless record regarding either of those. But I am thankful that our nation has, in word and very often in action, been particularly concerned with securing “the blessings of liberty” to all of its citizens. I consider that liberty a gift of God, and I’m thankful that I live in a country in which safeguarding it is a priority.
I’m thankful for people who have fought for that liberty, and often died for it. I don’t know how I would reconcile Jesus’ teaching and example with aiming a gun at another human being who is my enemy  only because of the uniform he wears, but because others have, I haven’t had to. I think it’s always right to recognize and appreciate the sacrifices of those who have fought for liberty against tyranny.
I think it’s important to recognize that a lot of the debates that fracture our nation right now have to do, not with the rightness or wrongness of particular actions or ways of life, but with how to best make sure that God-given liberty is available equally to every American citizen. Changing the terms of the debate about immigration, or gay marriage, or a host of other issues from “What’s right?” (For whom? According to whom?) to “What’s just, fair, and equitable for all?” might make a lot of things clearer. Wouldn’t a totalitarian state that only enforced the moral code of the Bible still be a totalitarian state?
Maybe most central is this: “the kingdom of God” is not the same thing as going to heaven when I die. The kingdom of God sits in judgment and finally subverts all the kingdoms of the world. In Jesus, I am a citizen of that kingdom, and that is my highest allegiance. That means that my priorities and values have to be the priorities and values of God’s kingdom, not America. I’m grateful when they line up. But when they don’t, my allegiance must be unambiguous. If living as a citizen of the kingdom of God sits too easily with living as a citizen of any nation on earth, then I need to take a long look at my faith.


I pledge allegiance.
Posted by Patrick Odum at 3:48 PM