He had no beauty or majesty to attract us to him, nothing in his appearance  that we should desire him.  He was despised and rejected by mankind, a man of suffering, and familiar with pain. Like one from whom people hide their faces he was despised, and we held him in low esteem.
-Isaiah 53:2-3 (NIV) 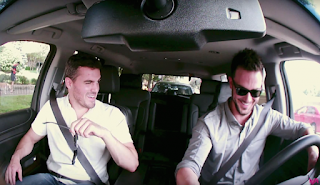 One day soon, Kris Bryant will be recognized most everywhere he goes, particularly in Chicago. He’s not quite there yet, though.
Last month, the rookie third baseman for the Chicago Cubs, who is likely to win the National League Rookie of the Year award, participated in the Undercover Lyft series as a celebrity driver for the ride sharing service. You’d think that Chicagoans would recognize him, but you’d be wrong. Not one person knew who he was. (One rider thinks maybe he’s ridden with him before, but that’s as close as anyone gets.)
Bryant takes several of his passengers past Wrigley Field, pointing out that they don’t have photos on the stadium of his “favorite player.” One passenger reminds him that Bryant is “new-ish,” and tells him to give it time.
One guy, when Bryant asked him what he thinks of baseball players as athletes, says he thinks they’re more like chess players. “Yeah, chess players,” muses Bryant. “They just kind of stand there.”
Another passenger talks about his skill as a volleyball player. “I play baseball,” Bryant says. “I’m pretty good.”
“Why aren’t you in the pros, then?” the guy comes back. “Not to make you feel bad about it.”
Seems to me that Bryant showed a lot of restraint. He does eventually reveal himself to his passengers, but I’d have probably done it a lot sooner. Maybe taken some pleasure in making them feel a little silly. Making them eat their words. I might have challenged the guy who equated baseball players with chess players to a push-up contest. I would have wanted to show the volleyball player what a professional athlete is. I would have been looking for a chance to sign some autographs, or to hear someone tell me how much they enjoyed watching me play. I would have wanted to be recognized.
I think that’s a human impulse, to be recognized. To be known. Not to be mobbed in public, maybe, or to be famous in the usual sense of that word, but to be known for something. What we want, I think — and maybe what the drive for at least 15 minutes of fame that many in our world seem to have comes from — is to be appreciated for something we’ve accomplished, some talent we bring to the table, something that we offer to the world. In fact, it seems as if we almost evaluate our accomplishments based on how many people know about them, the ripples they make in the world around us.
I don’t think there’s anything innately wrong with that. The trouble arises when we start to judge ourselves and others by the appreciation and recognition we receive. That’s why pro athletes seem to be about the money and the SportsCenter highlights, and why young athletes want to go to the schools that will give them the most exposure. It’s why professors want tenure, why lawyers like high-profile cases, why ministers seem to find that they’re “called” to progressively larger churches. It’s why we like awards, honors, notices, promotions. Why we all want the people we love to notice what we do for them. We want to be appreciated.
Jesus identified with Isaiah’s “Suffering Servant.” Though he went through his time of popularity, in the end the world around him moved on. By the end, he didn’t look good enough, wasn’t packaged impressively enough, didn’t command enough influence. He was “like one from whom people hide their faces”: despised, rejected, and all too familiar with suffering and pain. There was nothing in him that would attract us to him.
Certainly not by the end, when they hung him up on a cross. As far as the world was concerned, he was best forgotten there with the other nameless criminals who died with him.
Paul's take on it, though, is that the cross was far from Jesus’ great failure. It was the place of his greatest success, where he emptied himself of the need to be known, appreciated, and vindicated and obeyed God instead. He didn’t use equality with God to his own advantage, and instead “poured himself out” and “took the nature of a servant.” Though in union with God, “he humbled himself.”
The danger with our need for appreciation, you see, is that it so often leads us to give up on obeying God to serve our own agendas. Or, maybe even worse, to convince ourselves that our agendas and God’s will are the same thing. They’re not, almost never. Invariably, taking seriously what God wants of us will at some point force us to give up our own agendas and satisfy ourselves with his.
Professionally, success by God’s definition isn’t measured by how much money you make, how well-known you are, and how many people report to you. It isn’t measured by the number of times you’re mentioned in industry journals, or the size of the office with your name on the door. Ministers, God may want you in that small church you’re serving. Teachers, he may need you in that struggling, poor, inner-city school. He may want you to give up (for now) a fast-track career path to stay home with your kids, or stay in that church you’re blessing, or be with those friends who need your presence.
You may not be appreciated for your faith, your kindness, your gentleness, your righteousness. Millions have walked that path before you. Choosing God’s path may very well lead you away from the adulation of the masses. It may lead you into suffering and even death. When it does, just remember that we have an example, Someone who has gone before us and made the same choice. Remember that God lifted him up. And trust that he will do the same for you, in his time.


So the world may not know your name. That’s OK; there are plenty of names the world has never known that God knows. His approval is what matters, and one day he’ll say your name, loudly and with a smile. And, who knows, maybe angels will applaud. And the One you’ve followed, the Suffering Servant in whose footsteps you’ve walked, will acknowledge you: “Well done, good and faithful servant.”
Posted by Patrick Odum at 1:47 PM