You are a king, then!” said Pilate.
Jesus answered, “You say that I am a king. In fact, the reason I was born and came into the world is to testify to the truth. Everyone on the side of truth listens to me.”
“What is truth?” retorted Pilate. With this he went out again to the Jews gathered there and said, “I find no basis for a charge against him.
-John 18:37-38 (NIV) 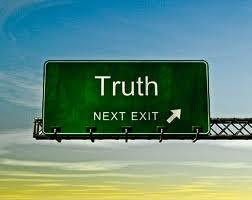 Quite a question from someone sitting on a judgment saying, trying to ascertain the guilt or innocence of a man accused of capital crimes. “What is truth?” What is that, to suggest that truth is this elusive, slippery thing, that knowing it is something like trying to hold on to a wet bar of soap in the shower? Truth is clear, obvious, undebatable. Isn’t it?
Well, except when it’s not. What’s the truth about the guy begging for change at the intersection near my house? What’s the truth about the women putting themselves on display at the theater down the avenue? What’s the truth about the kids in my city who see zero chance, zero, of a life other than the one they’ve inherited from their parents and grandparents?
What’s the truth about the guy who’s attracted to other men, didn’t ask for it, doesn’t want it, but there it is anyway? What’s the truth about the colleague who’s hurt you, spoken evil of you, and without cause?
While we’re asking, what’s the truth about your own character? Saint, or sinner?
Sometimes truth is easy, of the 2+2=4 variety. There are a lot of those truths, so self-evident that we just take them for granted. We should appreciate those more. Hold them up and look at them, investigate them, enjoy them, enjoy the certainty.
Because sometimes truth is decidedly not easy.
I don’t really mean that it’s the malleable thing, squishy like wet clay, that the postmodern fascination with your truth and my truth suggests. Truth doesn’t need pronouns. What I mean is that I don’t have a lot of confidence that I have a handle on truth, even most of the time. And, you’ll forgive me, I don’t have much more confidence that you do, either. That lack of confidence comes from experience, both with my own misappropriation of truth and with what happens when society at large thinks that they’ve got truth firmly in hand. It usually isn’t pretty, and not pretty in direct proportion to the certainty with which we silly, ridiculous, fallible human beings wield what we call truth.
The Third Reich was sure, you know? So were the terrorists who brought down the World Trade Center. So were the Crusaders who marched on Jerusalem and the police who turned fire hoses on the marchers in Selma, Alabama, so were they all sure, all certain that they were acting out of truth. And all wrong.
Very often the most misguided are those who shout the loudest and longest. There’s something about that certainty that can be seductive, draw people in. It provides a framework for seeing the world that provides structure, support, something to grab hold of. Certainty and conviction can serve as convincing dopplegangers for truth.
The church often gravitates to those who speak in the starkest, most black and white terms. We confuse intolerance for moral outrage, certainty for doctrinal correctness. We like it in politics, too. We like it because it cuts easily through complicated issues and demonizes those who don’t share our point of view.
But if we’re serious about truth, then we have to understand that volume and certainty aren’t its equivalent.
“Anyone on the side of truth comes to his conclusions, sticks to them, and shouts down those who would dare to disagree.” No, that’s not what Jesus said about truth. Fact is, Jesus seems to have believed two things about truth, no, three, with equal certainty:
You and I have little chance of grasping it clearly.
He is all about truth. Came to testify to it. Embodies it.
And so the third thing: If you care about truth, you’ll talk less and listen to him more.
“The truth will set you free,” we sometimes say, and run around trying to set as many people free as we can by shouting at them the most obscene perversions of truth. As though truth depends on us to pronounce it. We prize being right over compassion, grace, mercy, and love. Jesus did say that the truth liberates. But he also said that we know the truth by holding to his teaching.
In short, we’re not fit to be prattling on about truth until we’re walking in Jesus’ footsteps and loving people as he did.
Truth is relational, not informational. It comes to us from the Father, Son, and Holy Spirit. It’s mediated to us in the context of living with Jesus, walking with him, and treating others as he teaches us. And it’s discovered best in community with other people.
Truth is independent of us. It isn’t to be domesticated for our own use. It doesn't exist to make us feel secure or certain, and its purpose isn’t to win arguments for us. Truth comes from God, and it’s bigger than we can imagine. And, by the way, if what you call truth doesn’t lead you to love and compassion and grace, as it did our Lord, then it isn’t truth at all.
One other thing Jesus teaches us about truth: sometimes it gets you crucified. It isn’t to be thought of as a tool that you use to win approval, and it may not get you your own way. Just as likely it gets you chewed up and spit out by the people who should know it when they hear it and love it best.
And when that happens, then truth demands that you pray for the forgiveness of the people who have sinned against you.
This thing truth, it isn’t easy. Pilate was right. If we’re on our own in the business of discerning and grasping truth, we might as well throw up our hands and say, “Why bother?” But we’re not, of course. And when Pilate’s question bubbles up from the depths of our own hearts, we can look to the One who has given himself to show us truth.


May we be found faithful.