Do not get drunk on wine, which leads to debauchery. Instead, be filled with the Spirit, speaking to one another with psalms, hymns, and songs from the Spirit. Sing and make music from your heart to the Lord…
-Ephesians 5:19-20 (NiV)

So I’ve been singing songs in church all my life.
I have a huge repertoire of hymns, gospel songs, devotional songs, spirituals, and contemporary Christian music in my head. (If I had more musical ability, I could vocalize it more accurately, but that’s another story.) I know Charles Wesley and Fannie J. Crosby and Chris Tomlin and Thomas Dorsey (and I know he’s a different person from Tommy Dorsey, the musician more people know).
I say all that so maybe you’ll hear me when I say this: singing songs in church is weird. It is. It’s weird. 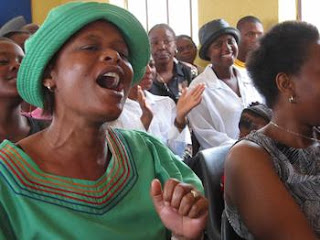 If you don’t believe me, bring someone to church who’s never been. And when the music starts, tell that person to sing along. Nine times out of town, that person will look at you like you’ve just suggested that he or she strip naked and juggle kittens while standing on a pew. Five times out of ten, he or she might be more willing to do just that, in fact.
Quick, name another setting where you get together with a lot of people and sing. The National Anthem at a ball game doesn’t count — you aren’t there for that. (Though, listen to the National Anthem sung at a Harding University basketball game…) You can’t, can you?
Singing in church is weird because, in the world we inhabit, when you want music you download it. Or you stream it. Or you turn on a radio (if you’re some kind of Luddite). Music, for us, is a product. We’re music consumers, and those who produce it are trained and wardrobed and auto-tuned and mixed. They’re professionals, and they’re part of an industry. And our involvement in the process is to buy it and listen to it. Music is made by other people for us to pass the time when we’re driving or working out or relaxing. And live music: well, that’s a concert, where we listen while the professionals play.
And that explains as well as anything why church leaders and musicians from many different traditions and denominations have noted over the last two decades that the church has forgotten how to sing.
In a lot of places, the church is more likely today to reflect our cultural assumption that music is a commodity, a product to be consumed. Worship services have in many places taken on the feel of concerts, at least until the sermon starts. The professionals, the musicians, play or sing on stage at the front of the room. Lighting sets a mood. And the job of the assembled church is to serve as audience. “Sing along if you want,” someone up front might suggest into a mic. But it isn’t strictly necessary that anyone take him up on it. The amplified voices and instruments of the worship leaders usually drown out the church anyway. And so the church doesn’t sing. “Aren’t the songs beautiful, aren’t the musicians talented?”
Am I overstating the case? Maybe, but not by much.
The Bible says sing. Not listen, not hum along, not sway in place with your hands raised. It doesn’t say have an emotional response to the ambience set by the lights and music. It says sing. It says be filled by the Spirit, and by the Word of Christ, and express what’s filling you with singing. Doesn’t matter if you can carry a tune in a bucket. Doesn’t matter if you know the difference between a G string and, well, a g-string. Doesn’t matter if the singing sounds good, or impresses visitors, or gives me goose bumps. Sing, for heavens’ sake. Sing, church.
When the church sings, we speak the gospel to each other. When I hear someone who’s lost a spouse or child sing, You give and take away…my heart will choose to say, “Lord, blessed be your name,” I’ve heard a sermon. When I hear a man who struggles with chronic illness and depression sing Just as I Am, I’ve heard a sermon. When I hear the words of former slaver John Newton’s song Amazing Grace sung, I’m drawn into his experience of the gospel. He has something to say to me, two centuries later. When I sing It Is Well With My Soul, Horatio Spafford is there with me singing the lyrics that he wrote on a transatlantic voyage, near the place where his daughters had died a few days before. When the church sings we speak the gospel to each other, across rooms and across centuries.
And of course when the church sings, we speak to the Lord. We express to him what’s in our heart. The psalmist knew that there are some days so full of joy or pain that the only way to express what you’re feeling to God is to sing. Sitting quietly, reflecting on even a beautifully-sung and played ballad won’t do it. Even standing with arms and faces upraised doesn’t quite cover it. When we’re filled with the Spirit, the only thing that will do is that we lift our voices to God.
Worship music has become a sticky issue in most churches because it’s become about little more than personal preference. Singing in church was never supposed to be about that. It’s about proclaiming the gospel to each other, and expressing gratitude, repentance, and obedience to God. Singing in church is weird, but it’s supposed to be, the way anything that challenges our world’s focus on self will seem weird.
So sing in church. Don’t just listen, or meditate, or hum along. Open your mouth and sing. Sing from your heart. And if a song doesn’t quite capture what’s in your heart, sing it anyway, enthusiastically and from your heart, because maybe it was there and you just didn’t know it. Or maybe someone close to you needs to hear exactly those words from your mouth.


Sing. Church isn’t supposed to be just an opportunity to hear some great music about Jesus and walk away feeling better. It’s a time to speak to one another and to God.