…[Y]our iniquities have separated you from your God…
your sins have hidden his face from you, so that he will not hear.
For your hands are stained with blood, your fingers with guilt.
Your lips have spoken falsely, and your tongue mutters wicked things.
No one calls for justice; no one pleads a case with integrity…
The way of peace they do not know;  there is no justice in their paths.
They have turned them into crooked roads; no one who walks along them will know peace.
So justice is far from us, and righteousness does not reach us.
We look for light, but all is darkness; for brightness, but we walk in deep shadows. ”
-Isaiah 59:2-4, 8-9 (NIV) 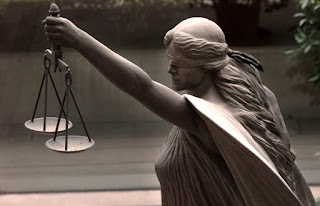 When James Meyers rented a videotape in 2001, I doubt he ever imagined that it would spend a couple of days in the news cycle in 2016. Amazingly, though, that’s exactly what happened.
Late in 2001, Meyers rented a VHS tape of the Tom Green “classic,” Freddy Got Fingered. The movie is, by all accounts, quite forgettable. And James, apparently, forgot. Forgot to return it, that is.
Cut to March 22, 2016. Meyers is driving his daughter to school, when he’s pulled over for a traffic violation. When the officers ran his license and registration, they discovered that he had an active warrant out for his arrest. They allowed him to drop his daughter off at school before driving to the police station to turn himself in. James was booked on one count of failure to return rented property. He’ll go to court in April to answer the charge, and is facing a $200 fine. Pretty steep for a Tom Green movie.
Comments on some of the websites where the story has been posted question why the police wasted their time running down an inconsequential crime like James'. (The officers in question stopped him for an unrelated offense, and were simply doing their jobs in acting on the warrant.) Some have used the story as a forum for commenting on perceived injustices in society: how the wealthy get away with much more serious crimes than this, for instance. Still others say that justice was done: Meyers committed a crime by not returning the video, in effect stealing it, and a court date and possible fine are the correct punishment.
Most of the comments, in some way, reflect a concern that justice needs to be done: At least, some specific version of it. James Meyers needs to pay for his crime. The justice system needs to concern itself with much more pressing problem. The holes in the system by which people get away with horrific offenses need to be closed.
We think of justice in almost exclusively legal terms. In our way of thinking, justice is about the guilty being punished. Justice is when the courts assign the blame for a murder or a rape or a libelous article or a negligent action to the correct person, and then exact the proper retribution. Justice, in our thinking, is regulated by a criminal code.
Scripture has a somewhat different view of justice, though, and maybe it’s one we should pay more attention to. In the Bible, justice isn’t only about guilt being assigned and punished. In fact, Scripture seems to think that if there is guilt to be assigned, justice has not been done. Injustice in the biblical world occurred when someone did wrong to another. When the poor were taken advantage of, when a widow was cheated out of her property, when a murder or sexual assault occurred, the Bible called that injustice.
Justice in the Bible is closely tied to the idea of peace. And not just absence of conflict: peace in the Bible includes security, prosperity, faithfulness, and fair treatment. So if there isn’t justice, says Isaiah, then no one knows the way of peace. When justice is far away, there is only “darkness.”
But Isaiah points to One who will come to bring “peace” and “justice.” And when Jesus came, he proclaimed that God’s kingdom had come, too, and that folks who hunger and thirst for justice in the world we live in will be filled. He claimed that he brought good news to the poor and freedom for the prisoners. He fulfilled the prophetic promises of a Spirit-empowered Servant who would proclaim justice to the countries of the world — and not just proclaim it, but also bring it about.
Ironically, Jesus died as a victim of injustice, but he was vindicated in his resurrection. Into this world of injustice and corruption he brought justice, through his own suffering. And that Spirit he received, the one that brought him from the tomb and vindicated him, he pours out that same Spirit on his followers. That Spirit helps us to live lives characterized by love, joy, peace, patience, kindness, goodness, faithfulness, gentleness, and self-control. In other words, the Spirit helps us to be people of justice. People who walk the way of peace, and lead others on it.
The church hasn’t always seen that, and we certainly haven’t always lived it out. But justice is in our DNA. It’s the atmosphere of the Kingdom that we serve and look forward to. We live in it and breathe it in and breathe it out because of Jesus.
So among people who are hurting, marginalized, sick, weak, and oppressed, may we be known for justice. Not so much by crying in the streets, or litigation, but by loving people, being faithful to them, and  bearing the suffering of a broken world the way that Jesus did, knowing that God is big enough to vindicate us, and them along with us.


Jesus proclaimed a kingdom characterized by justice and peace. And his church should do our dead-level best to show our world what that looks like. May that responsibility teach us how to live.