So You Want to be a Peacemaker?

Blessed are the peacemakers, for they will be called sons of God.
-Matthew 5:9 (NIV) 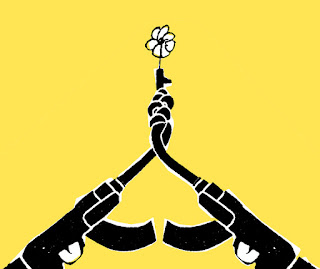 So the election is over. Your candidate won, or your candidate lost, or maybe you didn't care one way or the other. Whatever the case, you’ve probably noticed that while the election is over, the fear, anger, resentment, and division in our country is most certainly not over. There are demonstrations, protests, and violence in the name of one candidate or the other, or in objection to one candidate or the other. There is fear and misunderstanding provoked by President-Elect Trump’s harsher language and more controversial promises during the campaign. But bring that up, and his supporters are quick to bring up Clinton’s email scandal, or Benghazi, or her foundation. But you’re a Christian, and whether your candidate won or lost, or you just don’t care, you want to do something to help heal the division. But you aren’t sure what to do.
What follows are some suggestions as to how Christians can be a peacemaking influence in a divisive time in our nation.
First, remember to distinguish between voter and candidate. That friend you’ve loved for twenty years who voted for Clinton? He isn’t dishonest and unethical and greedy, as she’s been painted as being. Even if she’s as bad as some people say she is, your friend isn't her, and hasn’t suddenly become her by virtue of voting for her. That person you’ve worked with and grown to care for, and who voted for Trump? She didn’t vote that way because she’s suddenly become racist, homophobic, xenophobic, and misogynistic. Even if Trump is what some of his words and actions indicate he might be,  your colleague isn't him. People vote the way they vote for all sorts of reasons, and few agree with everything a candidate stands for. Try understanding the reasons that people you know voted the way they voted. Try hearing them and having conversations instead of vilifying and villainizing. You may not come to agree with them, but that’s OK. By listening to their reasons and trying to sympathize, you may be able to make peace with their choice. Or, at least, make peace with them.
Second, remember to win and lose like grownups. Children can strut around pounding their chests when they win and throw tantrums when they lose. Adults don’t get that privilege. Every election, there are winners and losers — and both must learn to show grace and magnanimity. Trump supporters — take the win with class. There’s no reason to rub it in the faces of those who said he didn’t have a chance. There’s certainly no reason to give our children reason to treat others with disrespect. Your candidate now has to get into the difficulties of governing, and making the divide in our country wider with incendiary words and actions won’t make it easier for him.
Clinton supporters, same goes for you: take the loss with dignity. Saying #notmypresident may feel a little better, but you have to know that, yes, he is. You don’t have to like it, and you should hold him accountable for what he says and does while in office. But he is the President of all Americans, and, trust me, we want him to be successful at that.


That does not mean, though, that the demonstrations and protests have to stop. We have to remember that many people are afraid and angry right now. And not for no reason. Our President-elect has made some reprehensible statements. (He has, that’s not debatable.) Immigrants, women, minorities, and other segments of society that he has hurt and offended and disrespected are feeling understandably scared, insecure, and lost. Some are having to reassure their children that they won’t be deported in the middle of the night (while dealing with their own fears that they may be). Some are having to explain to their daughters what their next President meant when he said this or that, and why it isn’t OK. Demonstration and protest is an American right, at least as important as the rights to a free press or gun ownership or freedom of religion. It makes those in power nervous, of course — but it’s supposed to. Understanding the hurt and fury that many people are feeling right now, and choosing to respond with grace and love, will go a long way toward healing and reconciliation. Dismissing those who have legitimate fears and questions as “crybabies” will not. Choose to act with love, in person and on social media.
Of course, both sides of the divide must remember that there is no excuse for violence. Those of us who follow the One who didn’t lift a hand in resistance when he was falsely accused, beaten, and unjustly executed should never commit, approve or encourage violence. We must not allow those who do to go unchallenged. We must demand that our leaders speak unequivocally against it, and that their actions speak just as unequivocally and unambiguously. We respond to evil with love, to insult with grace, to aggression with gentleness.
We must remember that there are brothers and sisters in Christ who voted for the other candidate. In most every church, yours included, there are those who voted the other way from you. They were not less your family in the Lord on November 9th than they were on November 7th. The Holy Spirit creates unity in the church, but it’s up to us to make every effort to maintain it by continually making peace. Go hug that brother or sister you know (or suspect) may have voted differently. Tell them you love them. Give them the respect and honor of listening to them, caring about their burdens, and praying for them, whether you agree with their political stance or not. Remember, God has strong feelings about those who destroy his church with selfishness and a party spirit.
Frank, the guy who runs the pizza place in our neighborhood we order from pretty often, said something pretty profound the other night. “Everybody’s talking about this election,” he said, hands covered with flour, spreading pepperoni and cheese over a pie. “I keep saying, whoever wins, I’m-a still gonna be makin’ pizzas.” Thanks, Frank. Good to remember.
However you feel about the outcome of the 2016 Presidential election, if you’re a believer in Jesus your job is still the same. You’re gonna be makin’ peace: peace between people, and peace between people and God. You’re gonna be proclaiming in word and action God’s love for the world, and his desire to reconcile us to himself in Jesus. And you’re gonna be working for reconciliation in our world between people who are estranged, between tyrant and tyrannized, haves and have-nots, alien and citizen, white and minority.
May we be daughters and sons of our peace-making God.
Posted by Patrick Odum at 3:53 PM