The god  of this age has blinded the minds of unbelievers, so that they cannot see the light of the gospel that displays the glory of Christ, who is the image of God…
…For God, who said, “Let light shine out of darkness,” made his light shine in our hearts to give us the light of the knowledge of God’s glory displayed in the face of Christ.
-2 Corinthians 4:4, 6 (NIV) 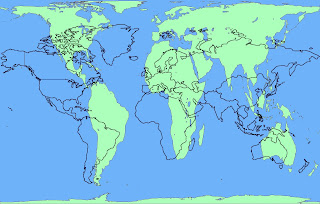 Look at a map of the world, and you can easily note a few things. South America and Europe are very similar in size. So are Greenland and Africa. You’ll see that Alaska is larger than Mexico and Germany. You’ll notice how huge Antarctica is, if it’s on the map you’re looking at. You won’t need a ruler or scale to notice any of this; it’s obvious at a glance.
Obvious, and also wrong.
It’s hard to make a three-dimensional globe behave properly when you try to lay it on a sheet of flat paper. Gerardus Mercator, the Flemish cartographer who came up with the map we mostly still use in 1569, was mainly concerned with trade routes between Europe and its colonies. It was most important, then, for Europe to be at its proper scale. North America, at roughly the same latitudes, also got a pretty accurate representation. But when you go north and south, there is considerable distortion, both of scale and centricity. South America, in reality, is nearly twice the size of Europe. Africa is 14 times larger than Greenland. Alaska is much smaller in relation to Mexico and Germany. And Antarctica is not nearly as large as Mercator’s projection makes it look.
So Boston public schools are getting new maps: the Gall-Peters Projection. This projection tends to squish everything laterally, but at least it gives a more accurate view of the relative sizes of land masses. It has some inaccuracies as well, but according to Hayden Frederick-Clarke, director of cultural proficiency for Boston Public Schools, it comes closer to accuracy. "Eighty-six percent of our students are students of color,”he says. "Maps that they are presented with generally classify the places that they're from as small and insignificant. It only seems right that we would present them with an accurate view of themselves."
So what we’re talking about here isn’t maps, really. It’s worldview. Colin Rose, a superintendent with BPS, puts it this way: “It's about a paradigm shift in our district. We've had a very fixed view that is very Eurocentric. How do we talk about other viewpoints? This is a great jump off point.” Worldview is the framework of ideas and beliefs through which an individual, group or culture watches, interprets and interacts with the world. It’s the set of lenses through which we see the world.
Remember in Return of the Jedi, when Luke asks Obi-Wan’s “ghost”why he told him that Darth Vader killed his father, and not that he was his father? Obi-Wan’s answer sounds slippery: “Luke, you're going to find that many of the truths we cling to depend greatly on our own point of view.” Truth, with respect to Obi-Wan, isn’t relative. But our perception of it almost certainly is. And it’s worldview that teaches us how to perceive it.
So it might be worthwhile for us to ask sometimes what map of the world we’re using.


For instance, if you’re a white man, don’t presume to “correct” a black woman on race relations. She has a worldview as well, but at that moment it isn’t about which “map” — yours or hers — is more precise. What matters is that you can see hers, and understand where she’s coming from. She’s quite possibly spent a lot of her life being told that a map like yours is the correct one. It will mean a lot if you can at least understand the differences between yours and hers. You’ll likely learn some real truth in the process — and how your map might distort it.
Worldview is what’s on Paul’s mind when he writes that whatever “this age” worships “blinds” its worshippers. It leaves us with a world map that doesn’t have room for the gospel, that inflates the importance of money and comfort and pleasure, that distorts sex and power, relativizes all religion, and does away with peace and community for the sake of radical individual freedom. It leaves us afraid of immediate death and suffering and marginalizes concepts like eternal glory as impractical fables.
This shouldn’t surprise us, though. Believers are not immune to being blinded by the worship of this world’s gods. In fact, our own maps are only different to the extent that God has made them so by making “his light shine in our hearts” so that we may come to know his glory through Jesus. It’s Jesus — his life, his teaching, his acts, his death, his resurrection — that redraws our maps. And, as you’ve probably discovered, even that is a process that’s still ongoing. We still make plenty of mistakes in the way we see the world. We still navigate by inaccurate charts, and sometimes even run aground. In Christ, however, his light grows brighter and our worldview is slowly (sometimes almost imperceptibly) but surely reorganized.
Make no mistake, our maps are redrawn only by God, through Jesus. But don’t imagine it’s some mystical epiphany that happens in a desert hermitage or on a mountaintop. One of the ways we’re blinded to the work of God is by our constant longing for an experience. As a rule, our worldviews will change mostly through following Jesus: that is, trying to go where he goes and do what he does. So your attitude toward wealth will probably only change when you follow him in loving and serving the poor. Your need for the approval of the world will only be transformed when you follow him in receiving the insults and scorn of the world with humility and faithfulness. Your love of your own sins will only change when you follow him in dying to self and rising to live a new life of service to God.
“We do not lose heart,” says Paul. Not when our new maps of the world remind us that inward renewal can accompany outward wasting, that the “light and momentary” troubles of this world are achieving for us a glory that never passes away. “We fix our eyes not on what is seen, but on what is unseen,” he tells us. That’s a stretch, isn't it? It’s a step of faith to navigate by maps that don’t look much like the landscape you can see. That's why Paul says “we” so often. A lot of the redrawing of our maps will take place together, in community, as we reassure each other that our new maps work, that this new worldview is accurate enough to live by. Don’t imagine you can do it alone. God didn’t intend for you to. That’s why he gave you the church.
Cleveland Cavaliers guard Kyrie Irving recently told two of his teammates in a podcast that the earth is flat. His reasons all make sense, except that they’re based only on what he can see, his direct experience.
It’s so easy to fall back to the old maps. So inviting sometimes to go back to living by what we can see directly. Don’t make that mistake. God is redrawing our maps. May the trajectory of our lives witness to the brand new view of the world we’ve been given through Jesus.
Posted by Patrick Odum at 1:58 PM