It would not be right for us to neglect the ministry of the word of God in order to wait on tables. Brothers and sisters, choose seven men from among you who are known to be full of the Spirit and wisdom. We will turn this responsibility over to them and will give our attention to prayer  and the ministry of the word.”
-Acts 6:2-4 (NIV) 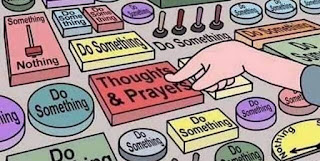 
Prayer is doing something. And it’s foundational in helping us to do more.
Posted by Patrick Odum at 3:03 PM