Won't You Be My Neighbor?

Let no debt remain outstanding, except the continuing debt to love one another, for whoever loves others has fulfilled the law. The commandments, “You shall not commit adultery,” “You shall not murder,” “You shall not steal,” “You shall not covet,” and whatever other command there may be, are summed up in this one command: “Love your neighbor as yourself.” Love does no harm to a neighbor. Therefore love is the fulfillment of the law.
-Romans 13:8-10 (NIV) 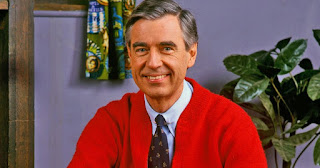 
That’s the Mr. Rogers way. But he just stole it from Jesus.
Posted by Patrick Odum at 8:10 PM