A Lump of Clay and an Hour and a Half

As you go, proclaim this message: “The kingdom of heaven  has come near.” Heal the sick, raise the dead, cleanse those who have leprosy,  drive out demons. Freely you have received; freely give. 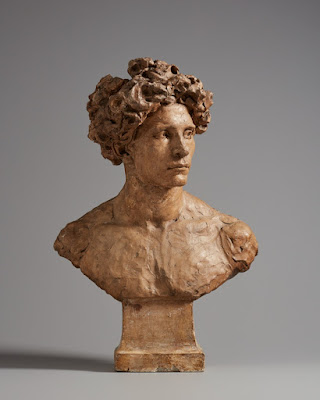 On a trip to the Art Institute this week, I ran across a sculpture I had never really noticed before, a simple clay bust of a young man. His eyes and mouth are expressive, you can see the curls and waves in his thick hair, he has almost a bewildered expression on his face — it looks like a candid snapshot captured in clay.

The artist was a sculptor named Aime’-Jules Dalou who lived and worked in the last half of the nineteenth century. He was French, but because of his participation in the Paris Commune of 1871 he was exiled and spent a decade in London teaching at an art school.

Dalou didn’t speak English, which would’ve been a problem except that his classes weren’t  lecture-based. They were, really, a performance. While his students watched, he would spend the class period actually sculpting, and invite his students to follow along with him. British sculptor Édouard Lantéri later said that Dalou “completely carried his students away with him…and succeeded in awakening an extraordinary enthusiasm where all before seemed dormant.”

The bust at the Art Institute was of some young man who’d been paid or otherwise coerced to model for one of his classes.

Yes, one. Dalou did the entire sculpture in one 90-minute class period.

There’s something that sounds right about that, isn’t there? Teaching by doing. You can teach the principles of sculpture in a lecture, I suppose. I could read some books and have some information to share with people who wanted to learn to sculpt, but all it would take to ruin the illusion that I knew what I was talking about would be for me to actually attempt to sculpt something. That’s when I’d be exposed.

Meanwhile, give someone like Dalou a lump of clay and an hour and a half, and he could teach a master class without saying a word.

Seems like the news is full of stories about well-known church leaders whose talk isn’t backed up by their walk. Or who could stand to say a little less. Or both. Look, none of us is perfect, and I know something about the pressure — even if it’s self-inflicted — of having to have something to say to the church every week. But if you aren’t teaching by what you do, then what you say isn’t going to make much of a difference, not in the long run and not even in the short term. That’s true for church leaders, but it’s true for the rest of us too.

It was true for the disciples. Matthew shows us Jesus sending his disciples out on this mission to “the lost sheep of Israel.” He’s given them authority to heal diseases and drive out demons and he dispatches them to the different towns of Israel. He doesn’t send them out with sermon outlines or Bible lessons or tracts: he sends them with a message: “the kingdom of heaven has come near.” They’re to announce that God’s kingdom is dawning in Jesus, and that anyone and everyone who put their faith in God can be a part of that kingdom. But they’re also to do. They’re to take what they’ve received generously from Jesus and be just as generous with it by healing the sick and even raising the dead. Sure, they’re going to talk about God’s kingdom coming. But they’re also told to show what it is about that kingdom that’s attractive. Their words and actions will work together to demonstrate what is and what is not a part of that kingdom. What they do is to be as much a proclamation of God’s kingdom as what they say.

We’ve gotten used to thinking of sharing the gospel as primarily a transfer of information. We know something that people who aren’t Christians don’t know, and it’s our job to get that information into their brains. To that end, we’re told, we need to memorize Bible verses and package the message as slickly as we can. We need to be persuasive and convincing and compelling to convince their minds and move their hearts to believe the information that we’re presenting to them.

When we aren’t able to, we tend to believe that we’ve failed. And so we don’t want to try it anymore because who wants to keep plugging away at something that you’re clearly no good at?

Do we ever stop to wonder why none of us is any good at it? It’s because we have at least two problems.

The first is that they don’t speak our language. The church has created quite a specialized vocabulary in two thousand years. We use that vocabulary to talk about things that no one but us is very interested in, to answer questions that no one else is really asking. We can try to make an argument as to why everyone ought to be as interested as we are in the things we’re talking about, but in the end it’s like we’re having to teach a new language just so someone is equipped to begin to hear what we’re saying. That’s tough. It makes things difficult right from the start.

Our second problem creates even more of an obstacle, though. People may not be able to understand our church language, but they can see how we live. And they may just not be seeing much that’s worth imitating.

I can’t raise the dead. I can’t tell you how many times I’ve wished I could, but I can’t. Jesus, for whatever reason, doesn’t seem to have given his church the authority to do that. He hasn’t given us the power to heal diseases miraculously — at least not most of us, and I’ve never seen it demonstrated unequivocally. But we can sit with and love and serve people who are sick. We can be involved in their healing by praying for them and with them, by taking them to the doctor or picking up their prescriptions. We can grieve with those who are grieving, and we can serve them and take care of some of their needs and help them bury their dead, and we can by doing those things earn the credibility to tell them about the hope we have in Jesus’ resurrection. But I think too many of the people we’d like to convert to Jesus don’t see much in his church that they can learn.

Jesus said not to worry about money, and sometimes it seems like we worry about nothing else. Jesus told his disciples to bring peace, and too often we bring more strife. He said to speak what the Holy Spirit leads us to say, and many times we prefer a political party’s talking points. He said not to be afraid, but his church too often is cowed into silence by a little disapproval from those around us. He said not to love our lives more than him, and yet it seems so often that we do.

So let’s try this: If you aren’t sure what to say to someone, try living authentically like Jesus so they can see.

Build a life like his in their view. Create a sculpture of him out of the medium of your words and actions.

Speak less, and when you speak, speak like Jesus. Teach by doing. Invite those watching to follow along.

You might be surprised at the work of art God creates.