When We're Weak, Then We're Strong

Therefore, in order to keep me from becoming conceited, I was given a thorn in my flesh, a messenger of Satan, to torment me. Three times I pleaded with the Lord to take it away from me. But he said to me, “My grace is sufficient for you, for my power is made perfect in weakness.” Therefore I will boast all the more gladly about my weaknesses, so that Christ’s power may rest on me. That is why, for Christ’s sake, I delight in weaknesses, in insults, in hardships, in persecutions, in difficulties. For when I am weak, then I am strong.

I noticed an article in Christianity Today recently about a peer-reviewed study in a journal called The Sociology of Religion. One of the researchers associated with the study, Nilay Saiya, wrote the article, called “Proof That Political Privilege Is Harmful for Christianity.” Saiya begins the article with a provocative statement:

“In our statistical analysis of a global sample of 166 countries from 2010 to 2020, we find that the most important determinant of Christian vitality is the extent to which governments give official support to Christianity through their laws and policies. However, it is not in the way devout believers might expect. As governmental support for Christianity increases, the number of Christians declines significantly.”

He goes on to say this: “our numerous statistical tests of the available data reveal that the relationship between state privilege of Christianity and Christian decline is a causal one, as opposed to only correlation.”

What that means is that their data is consistent enough and broad enough to show that there is a direct relationship between the degree to which a nation’s government is supportive of Christianity and declining numbers of Christians in that country. Here’s a graph of the data from the article: 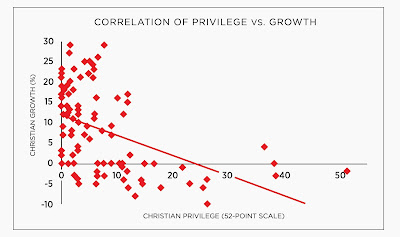 The horizontal axis of the graph plots the degree of what the researchers term “Christian privilege”: the degree to which a given country’s government gives official support to Christianity above other religions through their laws and policies in the time frame of 2010-2020. The vertical axis plots the percentage of growth or decline in the number of people who identify as Christians in the same time period. The further up on the vertical axis you go, the more Christianity is growing. The further right on the horizontal axis you go, the more official support a government gives. The red dots represent where the countries they researched fall on both axes.

This shouldn’t surprise us, should it? Paul heard from Jesus regarding his prayer that a weakness he was suffering be taken away: “My grace is sufficient for you, for my power is made perfect in weakness.” And so he said, “Therefore I will boast all the more gladly of my weaknesses, so that the power of Christ may rest upon me. For the sake of Christ, then, I am content with weaknesses, insults, hardships, persecutions, and calamities. For when I am weak, then I am strong.” Peter told the churches he was responsible for, “Beloved, do not be surprised at the fiery trial when it comes upon you to test you, as though something strange were happening to you. But rejoice insofar as you share Christ’s sufferings, that you may also rejoice and be glad when his glory is revealed. If you are insulted for the name of Christ, you are blessed, because the Spirit of glory and of God rests upon you.” Jesus said “Blessed are those who are persecuted because of righteousness, for theirs is the kingdom of heaven.”

Why are surprised and shocked and surprised and hurt and outraged when people in our world don’t privilege Christianity? Why does it scare us? Why does it make us fear for the loss of “our way of life” or “our Christian heritage”? A country can’t be Christian, any more than a school or a company can. At most it can be founded by people who have a Christian perspective on the world and favor Christianity in its laws and policies. If it does, though, this study suggests that it isn’t doing the church any favors.

Christianity does better when Christians have to struggle. The church grows and spreads the gospel best when we have to do so in an atmosphere of competing ideas and values and perspectives. Perhaps that’s because when we struggle we have to pray more. We have to be better acquainted with the gospel and how to communicate it. Maybe it has to do with the fact that we depend more on the Holy Spirit when the government isn’t our friend. Maybe — and I tend to think this is pretty important — when Christians aren’t favored, we learn to care more for others who are marginalized, different, and out-of-favor. And they see in us the love of Jesus.

Maybe it’s just because, when we are faithful and full of the love and grace of God even when we’re misunderstood, mocked, and hated, we follow in the footsteps of our Savior and Lord.

So don’t be afraid. Don’t imagine that we need a favorable climate maintained by the government to communicate the gospel and widen the borders of the Kingdom. We don’t need that at all.