For Christ’s love compels us, because we are convinced that one died for all, and therefore all died. And he died for all, that those who live should no longer live for themselves but for him who died for them and was raised again.

So from now on we regard no one from a worldly point of view. Though we once regarded Christ in this way, we do so no longer. Therefore, if anyone is in Christ, the new creation has come: The old has gone, the new is here! All this is from God, who reconciled us to himself through Christ and gave us the ministry of reconciliation: that God was reconciling the world to himself in Christ, not counting people’s sins against them. And he has committed to us the message of reconciliation. 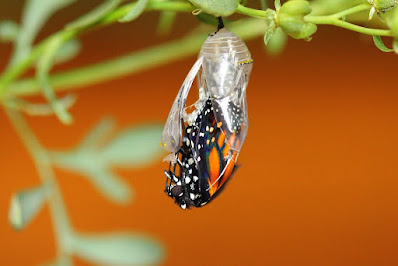 Maybe we need reminding. With another New Year’s Day come and gone and the pandemic grinding on, maybe we need to hear it again.

We’ve lost our jobs, or we’ve walked away from them, and those of us who haven’t are doing jobs in ways we’ve never done them before, for companies and organizations that have changed drastically.

Every time we go to the store, or a restaurant, or church, or the dry cleaner, or do any one of a thousand things we used to do without thinking, we put on our masks and distance and wash our hands afterward. Or we make the decision not to do those things, and accept that there might be consequences to that we’ll have to live with.

Some of us start a New Year missing family and friends who we’ll never give Happy New Year wishes to again. And we wonder how any New Year from here on out will ever be a truly Happy one.

Even church has changed; the schedule, the way we do things, the time we spend together. Some of us have traded in-person presence for online, and maybe that’s convenient and maybe we even like it in some ways, but it isn’t the same.

Yes, I think we need reminding.

Right in the middle of that reading up at the top of the page is what we need reminding of. You see it?

If anyone is in Christ, the new creation has come.

A lot of English translations have there some variation of “that person is a new creation.” But this is a good example of why translation matters, and how sometimes it takes a translation a few tries to get it right. The Greek Paul uses here would be literally translated something like, “If a person is in Christ — new creation!” It isn’t wrong, of course, to understand that a person who comes to faith in Jesus is made new. It’s just that he or she is made new because they become a part of God’s new creation.

See, it’s not just that in Christ you’re made new in the forgiveness of your sins and the presence of the Holy Spirit to help you and the new purpose you have. It’s that you become a part of what God is doing to make everything new. The old has gone. The new is here.

That idea of “new creation” is from the part of the Bible we call the Old Testament, but that Paul would have just called “the Scriptures.” In Isaiah 65, for example, the prophet looks ahead to a time past the exile, the loss of the Promised Land and the temple and national sovereignty, to a time when God’s people will “be glad and rejoice forever” in what God will create, a time when “the past troubles will be forgotten:”

“See, I will create

new heavens and a new earth.

The former things will not be remembered,

nor will they come to mind.”

“Heavens and earth,” of course, are a summary of God’s created universe, as in Genesis 1:1. Paul isn’t coming up with anything new in 2 Corinthians. What he’s saying is that the centuries-old hope that God will remake creation is finally coming to fulfillment, that it’s happening all around and in the church to which he’s writing, that they’re being made new individually and that they’re being made new as a community, that the whole heavens and earth are being made new, in fact. And that it’s happening through Jesus. God is “reconciling” human beings to himself, he’s wiping away all the devastation caused by human sin and selfishness and replacing it with his love as seen in Jesus. And he’s saying that this will quite literally change the world.

We need reminding right now that God’s purposes in Jesus aren’t diverted in the slightest by a pandemic or political instability or anger or hate. “Christ’s love compels us,” Paul says. It compels us to see each other differently, not as adversaries but as human beings loved by God. It compels us to choose to live for others, and not ourselves. It compels us to stop copying the world’s ignorant, stupid, self-absorbed ways of seeing and dismissing one another. It compels us to accept the ministry he has given us — the ministry of taking the message of his reconciliation to a world that’s going on as if God hasn’t made everything new in Jesus.

I know, it’s hard to see sometimes. That’s why we need reminding.

See, though, to really grasp this and take it seriously is to see that, as sure as we’ve been made a part of God’s new creation in Christ, we’ve been given a job to do. A responsibility. We’re representatives of that new creation to the world around us.

So we must actively push back against our tendency to see others “from a worldly point of view”. Instead of giving in to the habit of dividing ourselves and the people around us into categories, tribes, allies, enemies, people like us and people not like us, we see every person as a creature of God, made to bear his image, and  as a possible location for his new creation. We must act in such a way as to demonstrate and advocate for each person’s dignity and value, simply because they are human beings. We must develop the new habit of seeing them through the lenses of the new creation brought about through Jesus’ incarnation as a human being. In Christ, God is showing that he is not inclined to count peoples’ sins against them. How can we?

The message we are to carry to the world is not a message of judgment, disregard, contempt, or anger. We aren’t called to give voice to the politics of fear. We certainly aren’t to be spokespeople for the powerful, the corrupt, and the privileged. “God was reconciling the world to himself in Christ” — that’s our message. New creation — that’s the world in which we live now.