All Scripture is God-breathed and is useful for teaching, rebuking, correcting and training in righteousness, so that the servant of God may be thoroughly equipped for every good work. 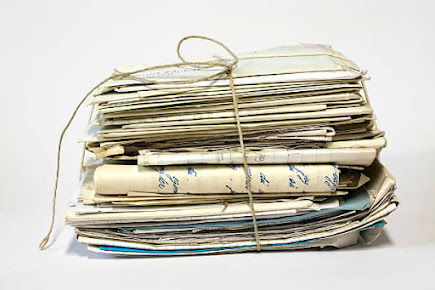 I was rummaging through a closet recently, and way in the back I came across an old, dusty shoebox I hadn’t looked at in quite some time. I knew what was inside, but I just hadn’t had occasion to open it up for a few years, I guess. So I took a minute to rummage through it a little.

The box mostly is full of letters and cards, all from a girl in her early 20s I was “talking to,” as the kids say. Before you start thinking there’s a scandal here somewhere, I’ll just tell you that I went on to marry that girl.

The letters and cards were mostly from when we were in college. A lot of them were from the summer I was living in Montana and she was home in Chicagoland. Some were from the semester I was still in college, but she had already graduated and was, again, in the Chicago suburbs.

The letters are full of the sentiments you’d expect, the kinds of things young adults in love write to each other and then, years later, chuckle over fondly and feel those warm feelings all over again. There’s also a fair amount of talking about what’s going on at work, or with family members, or asking me to say hello to so-and-so or asking for updates on college friends. Several are heavy on wedding planning details, which she was obviously spending a lot of time on and I was, apparently, not of much use in. (To be clear, I was excited about the marriage and, I guess, not so much with the planning.)

But I was surprised by something as I skimmed back over some of those letters; there were names I don’t remember. References to events that I can't reconstruct. Advice and encouragement about situations that I really don’t recall. It has, after all, been over 30 years since those letters and cards were written. Maybe I could reconstruct it all better if I still had the letters I wrote to her at that time. As it is, while I remember the feelings we had for each other, some of the specific references to people, places, and events are a bit hazy, or a lot hazy. Or pretty much lost to time entirely.

Now, imagine if those letters weren’t written to me, by the woman who became my wife, but to someone else and by someone else, neither of whom I knew. Say they they had to be translated from another language first. And then imagine that they were written not a few decades ago, but a couple of millennia.

Imagine that, and you start to get the idea of why sometimes reading the Bible is hard.

Maybe the first thing to remember when you read the Bible is that it was not written to you. “But wait,” you say. “Doesn’t the Bible say that it’s ‘God-breathed’ and useful for equipping us for ‘every good work’?” Of course, you’re right. It does say that, and I wouldn’t for a second want to be understood as saying there’s nothing for you in the Bible.

But I’ll double down: it was not written to you.

It’s like if you were reading Laura’s letters to me. There are things there you’d relate to. Maybe even some words you’d find inspiring or helpful for something you’re going through now. But a lot of it would be stuff that doesn’t apply directly to you. A lot of the Bible is that way, as well.

But the Gospels are likely written to — or at least for — particular churches as well. Revelation is written to seven churches in the Roman province called Asia (which is what we know as Turkey, but, again, never mind).

The Old Testament is written to the ancient nation of Israel, or segments of it. They’re particular documents, written to and for specific recipients for specific purposes just as certainly as Laura’s letters were written to me.

It may certainly be that at least some of the authors of the documents that make up the Bible anticipated that future generations of believers would find guidance and help and encouragement to live faithfully in their own places and times through their writing. Still, all of those documents reflect the language, style, issues, and concerns of their original recipients. Some of them mention names of specific people — many of whom we don’t know. Some of them construct a code of laws that the original recipients are supposed to follow — but not necessarily us. Some of them deal with violations of those laws, and those words may not apply directly to us. Reading the Bible often requires sifting, making judgments about what applies directly to us (like, “you shall not commit adultery”) and what doesn’t (“you shall not boil a young goat in his mother’s milk”). In some cases, like in those examples, we do that automatically and unconsciously. Other times, it takes more work.

But here’s the thing: the less aware we are that the Bible isn’t necessarily written to us, the more likely we are to get its application wrong. You know what I mean, I’m sure, because you’ve heard people abuse the Bible to “prove” all sorts of things, and they almost always abuse it by acting as though it’s speaking directly to us. Promises of prosperity to the nation of Israel if they obey God become direct promises of prosperity to America, or to individuals. Commands for ancient Israel to wage war on a particular group of people get twisted to sanction war for nationalistic goals, or even violence against anyone perceived as God’s enemy. One  problem in both of those examples is forgetting that the Bible isn’t written to us.

Alexander Campbell said it this way:

“[Some Christians] read…through the spectacles of their vernacular versions, and, superadded to this, through a ready made theology, imparted to them by early education and high authority - parental or ministerial or both. It has become part and parcel of their individuality.”

Campbell was just pointing out that we all read the Bible through a specific pair of glasses, created by our distance from the original text (in time and culture) and the ways we’ve been taught by parents, teachers, clergy, church, and culture to read it. The only disagreement I have with Campbell is that he seems to think that you can read the Bible any other way. He had his own “spectacles” too, whether he knew it or not.

The only way, I think, to see around those lenses we’re given is to remember that the Bible isn’t written to us. Literally, we’re reading someone else’s mail. Knowing that should make us more humble that we have the “correct” interpretation. It should make us more curious to dig and search for what the text might have meant to the people to whom it was written before coming to hard and fast conclusions about what it means for us.

The miracle, of course, is that through reading someone else’s mail the Holy Spirit does teach us and remind us of God’s faithfulness and challenge us to obey him and follow him. What I’m saying doesn’t undermine that. If anything, it invites us to be a participant in what God is doing. Not text-jacking verses to create our own preferred Bible, but instead investing ourselves in the study of Scripture with other like-minded people and with Jesus present with us through the Holy Spirit.

That’s how we’ll hear God’s word to us.