Therefore, since we are surrounded by such a great cloud of witnesses, let us throw off everything that hinders and the sin that so easily entangles. And let us run with perseverance the race marked out for us, fixing our eyes on Jesus, the pioneer and perfecter of faith. For the joy set before him he endured the cross, scorning its shame, and sat down at the right hand of the throne of God. 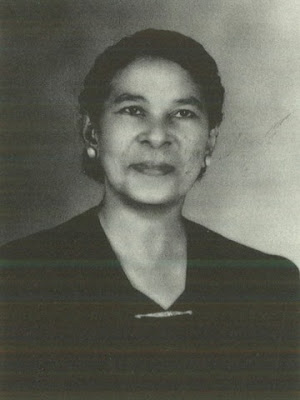 For Black History Month, I thought that it might be good for me do some remembering, particularly of Black people and the contributions they’ve made to the Restoration Movement and Churches of Christ, of which I’m a part. If you're a part of that particular “tribe” as well, I hope you’ll find some insight into your history helpful. If not, I think you'll still find these stories of Black Christians serving the Kingdom in spite of obstacles and resistance — sometimes by other Christians — to be challenging and inspirational.

This week, I’d like to introduce Annie Tuggle to you. I’m indebted to Bobby Valentine, Michael Casey, Wes Crawford, and Edward Robinson for introducing me to Ms. Tuggle.

Annie was born in 1890 in Shelby County, TN. Her grandfather, Quinton Roberts, was the son of a slave, Mahalia, and plantation owner Schuyler H. Roberts.  She was born to Haywood Tuggle and Mollie Roberts. She was baptized in 1908 at the age of 17. Though she had a love for learning, poverty and racism made it difficult for her to get an education. Her experiences gave her a heavy burden for helping others become educated.

At the age of 7, Ms. Tuggle attended Featherton School in Shelby County. Since she could partially read, she tutored other students. At 17, and in the seventh grade, she was able to study at Lane College in Jackson, TN.

Before graduating high school, Ms. Tuggle became a teacher and even a principal (at age 19!) of The Promised Land School in Millington, TN. In 1913, she came to the attention of G.P. Bowser, an educator and preacher in the Black Churches of Christ, who invited her to study at his Silver Point Christian Institute. After she complained about the condition of the facilities, Bowser sent her out to raise funds in Tennessee, Arkansas, and Mississippi. Among many others, she visited David Lipscomb, who convinced A.M. Burton to contribute and encouraged readers of the Gospel Advocate to do the same.

Wanting to complete her high school diploma (Remember, she had been too busy teaching others and fund-raising to do so!), she enrolled at Walden University in Nashville, where she graduated as Valedictorian in 1923 at age 33. She enrolled at Fisk University (but dropped out when she found out she’d have to attend their chapel services instead of her own church), and studied at Tennessee A&I (now Tennessee State University).

Ms. Tuggle was theologically very conservative, including her attitude toward the role of women in the church. (She once refused to baptize her cousin because she didn’t think she could do so as a woman. Another time she wanted to start a congregation with several new female converts, but wasn't sure she had that authority, so she consulted with an elder at another congregation in Shelby County, who “gave her permission.”) Despite living within a set of fairly narrow restrictions about her place in the church, Ms. Tuggle pushed back in numerous ways. Once, during a sermon at Silver Point, the preacher was asked a question. He asked her to answer, since she was, in his words, “a young lady in the audience who is well versed in the Scriptures” and “has studied to show herself approved unto God …” She often read the Bible aloud during gospel meetings and sermons because many preachers of the time were functionally illiterate.

In the early 40s, Ms. Tuggle went to work for Bowser again, this time raising funds for his new school, Bowser Christian Institute in Fort Smith, Arkansas. Later in the decade, Marshall Keeble brought Ms. Tuggle to teach at Nashville Christian Institute, a preparatory school for Black students that was associated with Churches of Christ. Among the students she taught were were Fred Gray, the Civil Rights attorney associated with Rosa Parks and Martin Luther King, Jr., and Chicago preacher Robert Woods, longtime minister for the Monroe Street Church of Christ.

Ms. Tuggle sometimes worked as a maid to pay for her educational expenses, and through that experience   learned a creative way to deal with southern white prejudice. When she traveled, she would dress as a maid because, as she said, "we could go in the front door, get our money's worth and get first-class merchandise, because the merchant thought we were buying for white people.” Dealing with racism wasn’t always so simple, however; she spoke out boldly about sexual advances from White men, including ministers.

Ms. Tuggle spent a summer in Chicago working in the laundry of a hotel. She moved to Detroit in 1944, where she spent 20 years. While there, she started a pie business, opened a school of her own, the Home Training Christian Institute, and published one of the first histories of Black Churches of Christ. She moved back to Memphis in 1964, but not exactly to retire; in 1967 she went on a three-week mission trip to the Caribbean. She came back a passionate advocate for Jamaica and Haiti, and spoke in churches to create momentum for missions there. In 1971 she moved to Southern California, and at 84 published her autobiography, Another World Wonder — which is in reality a history of Black Churches of Christ.

It’s a history that I, for one, don’t know enough about.

In a tract for her school in Detroit, Ms. Tuggle wrote these words:

“Life is made up of accumulations - here a little, and there a little. So the person who fills his todays to the brim with life and service for God, finds himself in old age drinking from the fountain that never runs dry. His memory, then instead of being the handmaid of bitterness becomes the minister of peace and gladness.”

If that’s so, then Ms. Tuggle’s memories must have given her a lot of peace and gladness. She taught thousands, including civil rights leaders, entrepreneurs, and church leaders. She swayed opinions, influenced missions, and helped secure an education for many children and adults who otherwise would have had no opportunities to learn and better their lives.

I learn from Ms. Tuggle what it means to “run with perseverance the race marked out for us.” None of us have the same race. All of us face a combination of obstacle and opportunity that no one else faces, and all of us have received our own unique calling. Sometimes it takes perseverance to understand the boundary lines of our races. Sometimes it take perseverance to overcome the obstacles. But Jesus shows us how to run, even when he lets us figure out the path on our own. Run your race. Don’t let anyone tell you what it should look like; you’ll know by finding out what you love, what matters most to you, and how your own experiences — good and bad — have shaped you. Run your race. But run it always with your eyes on Jesus; he went first, and by completing his race showed us how ours will be fulfilled.

And keep joy before you. Run your race faithfully, and you’ll bring the love, joy, and peace of the gospel to many.

Think of the memories.