A father to the fatherless, a defender of widows,

is God in his holy dwelling.

God sets the lonely in families…. 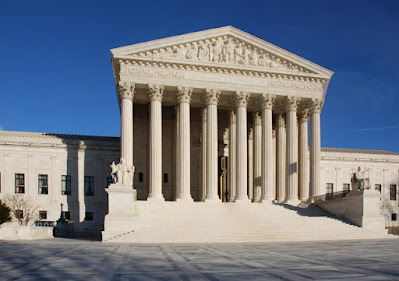 This isn’t something I really want to write. But I’ve been thinking about it for about a month now, and the events of today in Washington feel like they’re pushing at me. I have a feeling that what I write isn’t going to make anyone happy. But maybe if it helps us to find our way through a difficult subject with the light of the gospel, then it’s worth it.

This morning, the Supreme Court of the United States overturned Roe v Wade, as anyone who has been paying attention to the news since late last month knew was going to happen. Roe was, of course, the landmark  1973 decision by the Court that ruled that abortion was a Constitutional right. By overturning it, the Court has left decisions on the legality of abortion up to state legislatures, and women will now have widely-differing access to abortion depending on where they live and their financial means. In many states, as early as today most abortions are illegal. In others, laws will go into effect in the near future limiting or outlawing abortion.

I’ve already heard today from people who are filled with joy over this decision. I’ve heard from others who are devastated by it. I’m going to resist the urge to weigh in on which side I sit — or even if either of those positions adequately conveys my attitude. This is mainly due to my love and appreciation for people in my life who are very Pro-Choice and very Pro-Life. The talking points and political rhetoric over this subject don’t always allow for the fact that people of goodwill, even people of faith, might disagree on it.

On the one hand, people with strong Pro-Life convictions are sometimes ridiculed and hated as Stone-Age cretins full of hate and venom who want to control women and force religion down the throats of society at large. I’ve heard them referred to as fascists. On the other hand, people with strong Pro-Choice convictions are sometimes the recipients of hate and venom. It’s sometimes assumed that they hold those convictions because they want a world in which all that matters is their own personal freedom to do what they wish with few consequences.

In these stereotypes, I see no one I recognize. Oh, I understand the stereotypes, but no one I know on either side of this issue matches them. That ought to tell us something right there: When literally no one you know and love matches a stereotype, then maybe the stereotype isn’t all that useful. Whichever side of the issue you come down on, I promise you this; there will be a time when you’ll have to work with, worship with, serve with, talk with, or share a house with someone who comes to the opposite conclusion.

There's a gospel solution to this issue, of course. That’s ironic, because some of us who know the gospel best inexplicably think it no longer applies if someone doesn’t get this issue right. Here’s what I suggest.

First, the gospel tells us that a world in which children are unparented — whether through abortion, neglect, or being orphaned — is not the world God intended. God “sets the lonely in families.” God demands that his people care for widows and orphans. If it’s true, as studies say, that financial struggles and lack of help from a partner are two of the main reasons women seek abortions, then shouldn’t God’s people be all about helping women struggling with two terrible alternatives to see another option? Churches and organizations that work hard to offer solutions — adoption, medical care, family counseling, job skills, education, day care — are doing amazing work, and we should encourage them in that work in every way we can.

Second, the reason many Christians are against abortion is not that they want to control peoples’ bodies and reproductive choices — at least, that’s not the reason most Christians who oppose it do so. It’s that Christians generally — and there is variation in this — view life as something given by God intentionally and for a reason. Conception is a theological act, not just a physical one. We know that, all the time, God raises children born in difficult circumstances to do amazing things in the world. We know that life is to be valued and respected. This, or something like it, is the view of life that the Christian faith burdens us with.

That being said, Christians aren’t always very consistent with that high view of life. If we were, maybe we’d be heard more readily on abortion. If, for example, we demonstrated that we thought the lives of poor women of color mattered, then maybe they’d believe that we thought the lives of their unborn children mattered too. If we value the lives of children and young adults enough to hear them when they try to tell us about the abuse and injustice they’ve suffered, maybe they’d be more convinced of the value God places on life.

Third, Christians need to have better conversations about freedom. Sometimes we buy too much into the notion that freedom is the radical individualism of American political rhetoric. For believers, freedom is about human flourishing. It’s about people having the opportunity to be the best God has made them. When the Bible talks about justice and righteousness, human flourishing is what it has in mind. That flourishing, though, only happens in community. The acrimonious debate over abortion is just one way we’ve shown that we’ve failed in creating the kind of community in which people can grow and mature and be the best they can be. On the one hand, we fail by treating abortion as nothing more than an individual right that has nothing to do with the larger community. On the other hand, we fail when we legislate against the one act and do nothing to remedy the very social problems that make abortion a real, viable solution for a fair number of people.

Fourth, there is not just one “Christian” position on abortion. Sometimes our tribes of faith can be echo chambers. Christian denominations in America vary widely on the issue, from total opposition to abortion for any reason to the availability of abortion in a limited window of time for specific reasons to the availability of abortion at any time for any reason. Some have no official position at all. Within those denominations, of course, you would probably find opinions all along the same continuum, some shaped by personal experience. It might do us all good to try to figure out why other people who wear the name of Jesus as we do come to a different conclusion than we do about this topic. We might never agree, but it would do us good to listen.

Finally, there is an untold number of women and men who have checked out of the church, or are in the process of checking out, over just this issue. Maybe they’ve had an abortion, and they don’t know if they have a place with God’s people anymore. Maybe they’re just struggling to understand why believing in Jesus means that they have to let someone else make that decision for them, or for someone they love. Maybe the gospel they’ve heard sounds more like a political platform. How we respond to the overturning of Roe will speak volumes to them. May they find no blame if they look to us. May they find no pride. May they find us neither pounding our chests in victory nor tearing our clothes in mourning. May they find people who speak to them, as always, of the love of the Savior, the forgiveness of sins, the life of the Spirit, and the hope of eternal life.

May we be found faithful.