But our citizenship is in heaven. And we eagerly await a Savior from there, the Lord Jesus Christ, 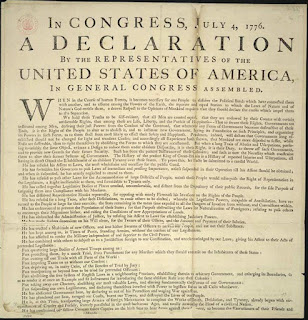 Last week — the week before Independence Day — an American politician announced at a rally that
she is “tired of this separation of church and state junk.” She argues that the phrase isn’t in the Constitution, and actually comes from “a stinking letter” — specifically a letter from Thomas Jefferson in which he wrote that the American public had built “a wall of separation between Church and State,” a metaphor that he borrowed from Roger Williams and John Locke.

She can be tired of it if she wants, but the “wall” Jefferson referred to comes from the Bill of Rights: “Congress shall make no law respecting an establishment of religion, or prohibiting the free exercise thereof.” In other words, the Bill of Rights expressly forbids Congress from creating a national Church, or interfering with the practice of religion in any way. A couple of centuries of American jurisprudence has applied that clause to various situations including school prayer, the use of religious symbols on public property, courthouse displays of the Ten Commandments, government-reimbursed busing or tax credits for religious schools, and so on.

The 1797 Treaty of Tripoli expressly states that America “is not, in any sense, founded on the Christian religion; as it has in itself no character of enmity against the laws, religion, or tranquility, of [Muslims]…” James Madison wrote in 1811,  "practical distinction between Religion and Civil Government is essential to the purity of both, and as guaranteed by the Constitution of the United States.” While total “separation” has not always been practical, it has always been the goal of our country’s government to preserve the practice of religion — or no practice of religion at all — as a personal, individual choice not subject to the whims of those who have civil power.

It’s easy to see why.

Our separation-of-church-and-state-fatigued politician this week went on to say, “The church is supposed to direct the government. The government is not supposed to direct the church.” But, historically, when government and religion get entangled, it’s not good for either. In John Calvin’s Geneva, the church had enormous civil power — the Reformed church. Those thought to be heretics — because they disagreed with some doctrine or practice — were exiled, imprisoned and sometimes executed. The church dictated attendance at worship, public life, what recreation was available, even who a citizen of Geneva could have sex with.

When the church gains power, it looks less and less like Jesus as its power grows. It begins to control, coerce, and command. It’s no coincidence, I think, that this same politician recently suggested that Jesus “didn’t have enough [AR-15s] to keep his government from killing him.” She needed to say that; the cross is an embarrassment to those who think the church needs more civil power, that Jesus should have fought back against an oppressive, tyrannical, unjust government.

Please, let’s remember in a world that thinks power is the solution that we follow someone who “laid down his life” willingly.

Let’s remember that we follow in the footsteps of someone who warned that those who draw the sword will die by the sword, who literally healed a man his disciples wounded trying to save his life.

Let’s remember that we follow the One who “did not consider equality with God something to be used to his own advantage; rather, he made himself nothing by taking the very nature of a servant, being made in human likeness. And being found in appearance as a man, he humbled himself by becoming obedient to death — even death on a cross!”

We follow the one who believed that only when God’s kingdom comes will things be “on earth as it is in heaven.”

To follow Jesus is to let go of the illusion that if we just had more power we could make things exactly as they ought to be. It’s to pursue his mindset of making ourselves nothing, serving those around us, and letting go of the temptation to use our power to our own advantage. It’s to give up on violence or intimidation as a way of self-preservation, and instead lay down our lives for others — even those who might oppose us.

Let’s not be surprised when those who believe in power don’t understand this. Why would they?

What’s more discouraging is when some of us who do claim faith in Jesus plaster his name all over efforts to disenfranchise voters, perpetuate injustice, and marginalize people for whom he gave his life.

There’s a lot about America to love, and I’m thankful for the blessings of being an American.

But one of those blessings is simply this: I don’t have to accept it when my country doesn’t live up to its ideals. One of the best things about America is that we, its citizens, can speak up when we see wrong. We can speak up for the wronged, even when they’re wronged by those in power.

And we can model an alternative. Another great thing about America is that loyalty to the nation doesn’t have to be our highest allegiance. And, as Christians, it can’t be. I saw a survey recently from Nationscape in which over 85% of Americans who claimed to be Christians said that being an American was at least as important to them as their faith. That’s a problem. Jesus, of course, said that we can’t serve two masters. Paul reminds us  that “our citizenship is in heaven.” The writer of Hebrews said we should aspire to be “aliens and strangers” in the world. We can, and should, show the world around us that there is another Kingdom, in which God is sovereign and in which the values of love, peace, righteousness, service, and sacrifice are primary. Our world should see in the church a colony of this kingdom in which we’re all busy making those values visible and influential in the world around us — not by dictating to others how to live, but by the way we ourselves live. They should hear us speaking up, not for ourselves, but for those who are hurting, those who are lost, those who are falling through the cracks and failed by the system and ground under the feet of the powerful. They should see us giving ourselves in loving service to our neighbors.

One of the best things about America isn’t even found in the Constitution. It’s in the Declaration of Independence, and it goes like this:

“We hold these truths to be self-evident: that all [people] are created equal. That they are endowed by their Creator with certain inalienable rights. That among these are life, liberty, and the pursuit of happiness.”

Those who came up with those words were right. By virtue of being God’s creation, no human being is greater than or less than any other. There is no exception to that. All have the same rights to live, to be free, and to have the chance to find joy and peace and security. May that truly be what America is about. But even when it isn’t, may it truly be what the church champions.

May we be grateful for the blessings God has given us as Americans. May we be thankful for the good in our nation, and just as honest about the bad. And may, always, our true citizenship be in heaven, and may we live out our lives as ambassadors of that kingdom.