Going to Church with Saul

Saul spent several days with the disciples in Damascus. At once he began to preach in the synagogues that Jesus is the Son of God. All those who heard him were astonished and asked, “Isn’t he the man who raised havoc in Jerusalem among those who call on this name? And hasn’t he come here to take them as prisoners to the chief priests?”     (Acts 9:19-21, NIV) 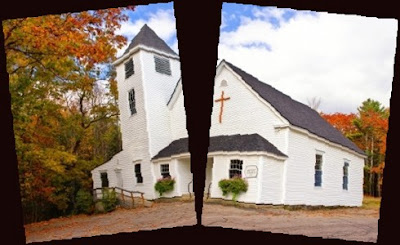 Growing up, I remember many times driving past a church near my house; not quite as close as the church our family was a part of, but not much farther. It’s name was even similar to the name of our church. They both had “Church of Christ” on the signs. So eventually, I asked Mom or Dad why we didn’t go to that church. I wasn’t looking to move, you understand. I was just curious.

What I was really asking, I guess, was why two very similar churches literally a five minute drive from each other both existed.

At some point, someone explained to me that our church and this other one differed on some specific practices, the details of which I won’t bore you with now. I’ve since been in many places where similar churches existed just minutes from each other. It’s not my job to evaluate the validity of those disagreements that created two churches where there needed to be or had been only one. Some disagreements can’t be worked out, I know. Believers today shouldn’t be held responsible for decades-old divisions that they might know nothing or next to nothing about. Plenty of good has been done in the name of Jesus by churches that originated in a contentious, angry split from other churches — just one more example of God’s redeeming power.

But the fact of division raises a question: If well-meaning churches before us have divided over issues that no one today remembers or cares about, then how do we maintain unity?

You probably know the name Paul; one of the great early missionaries and theologians of the church. Saul is a name not as many people know, but before Paul was Paul he was Saul, a persecutor of the church. He met Jesus, famously, on the road to Damascus, and from then on he was a proclaimer of the gospel.

What a great story, right? Well, when Saul tried to go to church after his conversion the believers in Damascus were, not surprisingly, a little wary. They asked two solid questions: “Isn’t he the man who raised havoc in Jerusalem among those who call on this name?” And, “Hasn’t he come here to take them as prisoners to the chief priests?” In short, “How do we know this guy is who he says he is? How do we know he’s OK?”

Those are fair questions. As much as the church should be open and accepting, there are times when we have to shut the door in the faces of wolves. There are people who will steer us away from the gospel if we let them. There are people who, in the name of Jesus, will take advantage of others. In cases like that it’s necessary for a church to divide.

But how do we know when? More to the point, how do we maintain unity when we shouldn’t divide?

Sometimes we base unity on agreement about “essential matters.” Trouble is, no one agrees on what’s essential. Most of us might think Sunday school is a good thing. Most of us might say that the number of cups used in communion is a matter of indifference. But for Christians bothered because they find no authority in Scripture for having divided Sunday school classes or more than one cup in communion, those things are absolutely essential. And sometimes “essential” doesn’t include that things it should, like justice and integrity. “Essential” can mean so much that it means nothing.

So, on the other hand, we sometimes base unity on a least common denominator approach to Christianity. I think every person who calls themselves Christian thinks that there was a person called Jesus who lived in the first century and who taught some things. Does that work? Thomas Jefferson literally cut his miracles out of the gospels, but he believed that Jesus lived and taught. Some would say that his resurrection was a metaphor, but they believe in a person named Jesus who said at least some of the things attributed to him. Some stick the face of Jesus on their political rhetoric. Muslims venerate him as the greatest of Allah’s prophets — at least up until Muhammad. So I don’t think a least common denominator approach to unity covers enough to be useful.

From the way the early church handled “the Saul situation,” we get some better answers about what to do when we have questions and wonder if unity is possible. Their example says a lot about making it a priority.

So that’s a good place for us to start, too, in maintaining unity. What’s the message? Too often, I think, churches divide when the message gets foggy. There might be a lot of things that make your church very interesting, unique, and special. But those aren’t the message. You might have some fascinating and controversial takes on this issue or that text of Scripture. Those aren’t the message. You might disagree with another church, but that isn’t the message either. There are other things worth talking about sometimes, of course. But Jesus — who he is, what he did, what Scripture says about him — that’s the message. Don’t let the message get foggy. Don’t get distracted. Go “at once” and start preaching Jesus. And when you see other people preaching Jesus — well, at the very least, they aren’t your enemies.

Things got tougher for Saul, though. His Jesus preaching upset folks so much that they wanted to kill him. Saul had to sneak out of Damascus with the help of “his followers.” Saul’s preaching had been so convincing that he was mentoring a group of Jesus-followers by this time.

If someone’s faithfulness to Jesus holds up through difficulty, what you have there is a fellow believer. Someone who carries their cross — endures hardship for their faith — is in Jesus’ words a disciple of his. This one might take some time to know, but if you’re seeing someone who lives by and proclaims the gospel even when it causes them problems, that’s a sister or brother in Christ.

When Saul snuck out of Damascus, he went to Jerusalem, where it started again. “Can we trust him?” I’ve seen a lot of church leaders in my lifetime who would never have accepted Saul. I pray I’m not one of them.

But Saul has an advocate, a man named Barnabas. Barnabas goes with him to Jerusalem and vouches for him. He told the apostles about the message Saul had preached, and about the fearlessness with which he endured hardship. And because they trusted Barnabas, they accepted Saul.

Let’s be advocates. I saw a website this week on which a church I’m familiar with was attacked for a change in practice on Sunday mornings. Let’s be the opposite. Let’s be advocates. Notice people and churches who preach the good news of Jesus. Note those who endure hardship and persecution with love. And tell someone, “That’s my family.”

Preach Jesus. Endure hardship. Be advocates for those who do. If we can take these things seriously, then there might be fewer churches. But they’ll be stronger and more united, and a much better witness to the gospel.