“My soul glorifies the Lord....

He has performed mighty deeds with his arm…

he has scattered those who are proud in their inmost thoughts.

He has brought down rulers from their thrones

but has lifted up the humble.

He has filled the hungry with good things 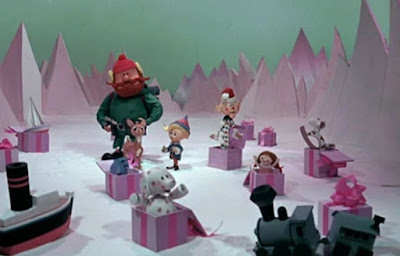 I was reminded this week of the old Rankin-Bass Christmas specials I used to watch as a kid. You might have seen them, too — if you’re around my age, I’m almost sure you did. (I don’t know if kids watch them now; they’d probably look pretty weird to kids used to computer animation.) They were stop-motion animation, with wood puppets, bright scenery, and catchy music. My sister and I looked forward to them every year, and 45 years later or so the titles have stuck with me: The Year Without a Santa Claus. (Heat Miser. Snow Miser.) Santa Claus is Comin’ to Town. The Little Drummer Boy. And, of course, the undisputed king of the Rankin-Bass specials: Rudolph, the Red-Nosed Reindeer.

You might remember that Rudolph isn’t just about the shiny-nosed misfit reindeer. There are other characters as well: an elf named Hermey who doesn’t fit in with the other elves because he wants to be a dentist, an Abominable Snowman who doesn’t fit in because he’s, well, abominable (but a very sweet guy once you get to know him), and a prospector, Yukon Cornelius, who doesn’t fit in I guess because he hasn’t found any gold? Anyway, all these misfits through a series of misadventures end up in a place called the Island of Misfit Toys. There, they meet toys that haven’t found homes because they’re defective or out-of the ordinary. There’s a train with square wheels, a squirt gun that shoots jelly, a “Charlie-in-the Box,” a spotted stuffed elephant, a cowboy who rides an ostrich, a stuffed bear with a feathered tail, and a bird with a fish tail. Every year, Christmas comes and goes, but these toys stay on their island, unwanted. Misfits. Rudolph and Hermey, of course, fit right in with the misfits — even it they aren’t toys.

Eventually, of course, Santa shows up and loads up the misfit toys to take with him — whether to give as gifts or repair, I was never quite sure. In any case, the show ended with them getting off their island and finding their place in the world.

This time of year seems custom made for people who have somewhere they fit. Parties, family gatherings, gift-giving — it seems like Christmas is the time of year where everyone sort of returns to the places they know they fit best. We go “home for Christmas.” We eat with family or friends. We reminisce about shared memories. We laugh at inside jokes. I still have a stocking with my name on it at my parents’ house, even though I rarely am there on Christmas Day and, oh yeah, am 54 years old!

I wonder how many “misfit” kids watched Rudolph and found some hope in seeing other misfits find their place?

Of course, it isn’t just kids who feel like misfits. I think one of the skills many adults learn is the ability to hide it when you don’t feel like you belong somewhere, just to smile and fake it and pretend you’re on the outside looking in because that’s where you want to be. Seriously, I think offices and schools and factory floors and boardrooms and homes and organizations must be absolutely full of people who if they felt they could be honest would tell you that they identify completely with those misfit toys, and maybe even wish sometimes that they could go somewhere everyone was a misfit.

I think even churches are full of people who feel like misfits.

I know of a church in my neighborhood who had a service last week they called “Blue Christmas.” It was intended for the misfits. It was for people who are estranged from family, or alone. It was for those who are grieving a loss. Who are celebrating Christmas with a medical diagnosis hanging over their heads. Who are going through a divorce. I think that’s a great idea. Not everyone is feeling celebratory just because December 25th rolls around.

Maybe though, we should remember that, when Mary sang about the first Christmas, and the baby already growing inside her, she sang about how through her God had “lifted up the humble” and “filled the hungry with good things.” I think she was singing about the fact that, though God knew of her “humble state,” he had “done great things” for her by choosing her to bring Jesus into the world. Her, of all people; a young girl in a tiny region of the greatest Empire the world had every known, a poor, unmarried, uneducated girl.

But she was also singing about how Jesus’ way of coming into the world was also how he would live in the world, and die — lifting up the humble and filling the hungry with good things.

Something Paul wrote in 1 Corinthians comes to mind:

Brothers and sisters, think of what you were when you were called.  Not many of you were wise  by human standards; not many were influential; not many were of noble birth. But God chose  the foolish  things of the world to shame the wise; God chose the weak things of the world to shame the strong. God chose the lowly things of this world and the despised things—and the things that are not —to nullify the things that are, so that no one may boast before him. It is because of him that you are in Christ Jesus,  who has become for us wisdom from God—that is, our righteousness,  holiness  and redemption. Therefore, as it is written: “Let the one who boasts boast in the Lord.”

Paul’s pushing back there at the very human tendency to seek to be well thought-of, loved, influential, smart, competent, powerful, and wealthy. He asks the church at Corinth to be honest about themselves and recognize that most of them are Exhibit A that God chose the foolish, weak, lowly, and despised to be his people and to know him through Christ. He didn’t choose by human standards; if he did, most of them would have been out of luck.  “God chose the misfits,” he says. God chose the misfits.

It’s OK to be a misfit. That’s what Rudolph taught us; misfits can be loved, valued, honored. They can fulfill their purposes in the world. And the gospel teaches us the same thing. God didn’t bring Jesus into the world through a wealthy, noble, powerful woman in Rome; he sent him through a peasant girl in hillbilly country. Because he came for the misfits. He came to show them that they were loved. That they mattered. That they had a place in God’s kingdom and that they could make a difference in the world if they would trust him.

So, please — be a misfit. Misfits, see, have nothing to boast about except for what Jesus has done. We can’t fall back on our talent, our brains, our money or our charm or our good looks. Misfits can only say, “Look what Jesus has done for me. He’s taken me off my island and given me a place and purpose. And he will for you too.”

Have a Merry Christmas, misfits.