The end of all things is near. Therefore be alert and of sober mind so that you may pray. (1 Peter 4:7)


Alexa Longueira, a 15-year-old from Staten Island, New York, was out for a stroll a couple of weeks ago. As she walked, she 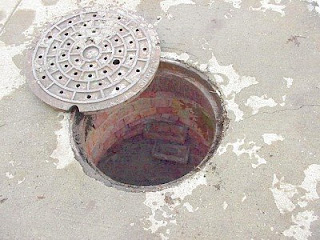 was doing something that millions of people do every day: exchanging text messages with her friends. I don't mean to pick on Alexa. I'm sure it's something she does often, and I'm sure she's had very few mishaps as a result of it. And what happened isn't completely her fault, either. But something did happen, and it might serve as a morality tale for incessant texters.

As Alexa ambled along, texting her little thumbs off, she happened upon a very normal-appearing manhole. Normal-appearing in all respects, that is, except in the fact that it was uncovered. I said what happened wasn't all her fault: New York's Department of Environmental Protection has issued an official apology for their being no tape or warning signs around the open manhole. But the apology was a little late, I guess, coming as it did after Alexa had already stepped into the open manhole.

Fortunately, Alexa's injuries were moderate and she is expected to recover completely. Physically, at least. Manholes, you understand, don't access magical underground fairy kingdoms flowing with rivers of milk and honey. There is water, along with some other stuff. I think it was the other stuff Alexa objected to. “Really gross...shocking and scary” is how she described her impromptu bath in the sewer. She lost a shoe while she was down there, before a DEP worker helped her out.

Apparently, though, she did manage to hold on to her cell phone.

Wonder if she sent a text while she was down there?

I don't like to send text messages. I'm apparently not smart or coordinated enough to do it quickly, and I happen to think that a phone has a pretty good secondary interface: you can talk to someone through it, if you weren't aware of that. Not being a texter, I haven't been in imminent danger of stepping into open manholes on city streets. (I did once step in wet concrete up to about my knee, but that's another story....)

All the same, I could probably stand to be a little more alert. How about you?

Alexa's experience illustrates the danger of all our technology, all our busy-ness, all the demands we have to meet and the stuff we have to buy. We're too easily distracted from paying attention to spiritual realities, and how those spiritual realities interact with and intersect the other realities of our lives. We're too easily convinced that God's claim on our lives will remain in our attics and storage rooms, or that he'll wait patiently for us in our pew at church until next Sunday. We go on our way, frantically banging away at the keys, trying to keep up with everything we need to keep up with, dangerously unaware that others are at work around us, opening up holes in our spiritual lives that we might not even see.

Peter in the garden. Adam and Eve in that other garden. David, spying on Bathsheeba. You get the picture, right? They all fell in to hazards that they should have been able to see and avoid. Peter feels threatened and afraid, and he pretends not to know Jesus. Adam and Eve couldn't see a lie, even when it contradicted what God told them. David knew he had no right to Bathsheeba, but he wandered right into adultery and murder anyway.

Chances are, you can think of a similar experience or two. Maybe you've just chalked them up to “human weakness.” If you've repented and received God's forgiveness, I have no interest in reopening old guilt. But sometimes our past mistakes can help us to be a little more alert in the future. I imagine Alexa will be looking for open manholes from now on.

Think back to times you've wandered into sin, times you've found yourself floundering and sputtering at the bottom of a foul pit that you didn't even see in front of you. Don't you honestly have to say that there are reasons that you were taken by surprise? Maybe you were stressed at work, or worried about problems with you kids, or things weren't so great in your marriage, or money was tight. Maybe it was something else, but the point is, you were distracted. Preoccupied. And because you were, you didn't take spiritual realities into account. By not attending to your relationship with God in prayer, worship, thanksgiving, service, and so on, you gave yourself no chance of seeing the spiritual dangers in your path.

That's why Peter reminds us to “be alert and of sober mind.” He'll warn later in the same book that we have to be alert because the devil runs around like a lion hunting prey. “The end of all things is near,” he warns. All those things that can be so distracting to us will be passing away, leaving us with only the eternal realities to deal with. If we're distracted by those things that are coming to an end, we might not be able to give our attention to the things that will remain. If our minds are always working overtime on problems and obsessions and worries and enchantments that will pass away, we won't have much energy left to spend on thoughts of things that are permanent. Things of God, and his kingdom, and our relationship to him.

Christianity isn't just about agreeing to certain propositions. Neither is it about frenetic activity. Jesus renews our minds through the Holy Spirit, and he asks that we discipline our thought-lives. As our lives swirl around us, he reminds us to do the counter-intuitive thing and choose to place our attention on him. If we do that, we'll be able to pray when we need to. We'll be able to maintain our faith and our focus when things seem to fly off the rails. We'll remember his promises when our security is shaken, and trust his love when we seem surrounded by enemies. And when Satan opens those pits in our way, we'll be able to see them far in advance and nimbly step around them.

I know a teenager in Staten Island who I'm guessing won't make the same mistake twice.

Go and do likewise.

Unless otherwise indicated, all Scripture quotations are taken from The Holy Bible, Today’s New International Version TNIV (r), Copyright (c) 2005 by International Bible Society. All rights reserved.
Posted by Patrick Odum at 12:15 AM