But Zacchaeus stood up and said to the Lord, “Look, Lord! Here and now I give half of my possessions to the poor, and if I have cheated anybody out of anything, I will pay back four times the amount.”
Jesus said to him, “Today salvation has come to this house....” (Luke 19:8-9)


Adrian and Tiffany McKinnon returned from a vacation to their home near Montgomery, Alabama, to find that someone had 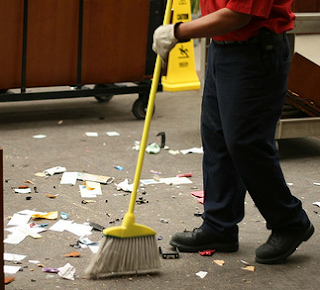 been there in their absence. A burglar had broken into the house, and the McKinnons were shocked to discover that he had looted the place. Almost everything was gone, and trash and debris were scattered all around. The place was a shambles. The McKinnons were devastated.

And then the burglar walked in. Wearing Adrian's hat.

He had made one more trip to the house to pick up a few remaining items. (Would-be burglars, let this be a lesson. Don't ever come back to the scene of the crime.) One thing the burglar hadn't taken was the gun Adrian kept in the house; he spent the next few minutes examining it closely, however; while Adrian held the thief at gunpoint, Tiffany called the police. Then, looking at all the damage the thief had done to their house, Adrian and Tiffany had an idea: Why should they clean up someone else's mess?

When the police arrived, Adrian and Tiffany were watching the thief picking up trash, replacing broken and discarded items, and generally cleaning up the house he had wrecked. He amused the officers for a few minutes by complaining about being forced at gunpoint to clean up the mess he had made. The police told him he was lucky; someone else might have made him a part of the mess.

It's a dicey business to pull a gun on someone, but I have to say I like the way the McKinnons handled the situation. I appreciate the justice and symmetry of having someone make restitution in kind with the crime that they've committed against someone. Our legal system, in general, seems to emphasize punishment. Restitution seems to be considered a matter for the civil courts. But the police could have carried that burglar off to jail, some judge could have imposed a maximum sentence, and the McKinnons would still have been left with a ransacked house. No amount of punishment would have given them restitution.

Restitution. That's not a word we hear much in courtrooms, or in church either, for that matter. It comes from a Latin word that means “to restore,” and that's what restitution seeks to do. When we make restitution, we try to restore what a person we've injured has lost because of our actions. It's a very Christian-sounding idea, or at least a very ethical-sounding one. There are all kinds of biblical texts that bear witness to the necessity of restitution. But it just doesn't usually come up much in our thinking. I think that might be because of grace. Or, more accurately, because of our misunderstanding of grace.

Most of us would agree with some form of the following sentence: “I'm saved by God's grace, not because of my good deeds.” What we mean by that is that our salvation has come about because God in his kindness has sent Jesus to forgive our sins. Our good deeds don't have to outweigh our bad ones, and there's nothing we can do to earn our salvation. As far as it goes, that's of course a biblical statement. But do you see what it assumes? It assumes that my sins are only between God and me. But in the course of sinning against God, we almost always involve someone else. Ask yourself if that isn't true: can't you almost always think of ways in which your sins have affected the people around you?

You could trace the effect of Zaccheus' sins pretty easily. His problems were greed and corruption. As a tax collector, he made his money by adding a fee to the taxes that Rome said he had to collect from the Israelites. The higher the fee, the higher his profit; and there was no one to tell him how much he could take. The people of his town despised him because he took food out of their children's mouths. So imagine their surprise when Jesus ate with him.

It was during their dinner that Zaccheus made his shocking announcement: “Here and now I give half of my possessions to the poor, and if I have cheated anybody out of anything, I will pay back four times the amount.”

Notice here that Zaccheus doesn't make this gesture to impress Jesus or to win him over. As far as we know, Jesus never said anything to Zaccheus about the way he made his living. Jesus has already invited himself to eat with Zaccheus, which in his culture signified acceptance. Zaccheus isn't trying to gain Jesus' favor. He's responding to the favor that Jesus has already shown. When Jesus announces that “salvation has come to this house,” Zaccheus' announcement isn't the cause. It's his response to the grace Jesus has already shown by sitting down at Zaccheus' table.

Still, Zaccheus feels the need to make restitution. I wonder how much money he gave away that day? Again, Zaccheus isn't making a desperate bid for salvation here. The Lord has seen him for who he is and still come to his house and received his hospitality. Zaccheus is already accepted. The restitution he offers to those he's cheated is the outworking of the salvation Zaccheus has already received. The salvation he receives is between him and Jesus. He doesn't need the crowd's acceptance or approval. But the salvation he receives doesn't remain between him and Jesus. It works its way out into Zaccheus' relationships.

And when we receive God's salvation through Jesus, it's not just between us and God, a matter of the forgiveness of our personal sins. Our sins touch others, and so the heart that has received God's grace turns outward, to try to bring his grace into relationships previously poisoned and broken by sin. Making restitution is one of the ways we bear witness to the genuine nature of the transformation that we're undergoing in Jesus.

So, in whatever way our sins have touched others, let us consider how to make restitution. Sometimes restitution is easier than at other times. Some damage can't be undone, some losses can't be restored. But if we've stolen, we give back or replace what we've taken. If we've injured or manipulated with words, we do what we can to speak words of healing and righteousness. If we've treated someone unjustly, we should act in ways that bring justice to that person. If our neglect has caused someone pain, the love we've received from the Lord should make itself known in our restorative deeds toward that person.

In respect to our feelings of guilt and regret, God wants us to know that in Christ our sins are forgotten. But in respect to how our sins affect those we touch, we must not forget. We must do what we can to clean up the trash and damage our sins have caused in the lives of others.

Sometimes, I guess, it's good to go back to the scene of the crime.

Unless otherwise indicated, all Scripture quotations are taken from The Holy Bible, Today’s New International Version TNIV (r), Copyright (c) 2005 by International Bible Society. All rights reserved.
Posted by Patrick Odum at 10:22 AM