“Therefore, the kingdom of heaven is like a king who wanted to settle accounts with his servants. As he began the settlement, a man who owed him ten thousand bags of gold was brought to him. Since he was not able to pay, the master ordered that he and his wife and his children and all that he had be sold to repay the debt. “The servant fell on his knees before him. ‘Be patient with me,’ he begged, ‘and I will pay back everything.’ The servant’s master took pity on him, canceled the debt and let him go. (Mathew 18:23-27)


Cigarette prices in New Hampshire have really gotten out of hand, if Josh Muszynski's experience is any indication. 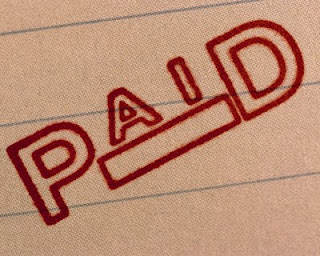 Josh swiped his debit card at a gas station last week to pay for a pack. When he checked his account balance online a few hours later, he was shocked to see just how much of an expense his habit had become. There in his account was a debit for $23,148,855,308,184,500.00.

That's twenty-three quadrillion, one hundred forty-eight trillion, eight hundred fifty-five billion, three hundred eight million, one hundred eighty-four thousand, five hundred dollars, if you're scoring at home. To put it in perspective, well...you can't really put that in perspective. Bill Gates, J.K. Rowling, and the Queen of England couldn't go in together and buy cigarettes at that price. All the nations of the UN combined couldn't afford them. You'd need, if I'm doing my math correctly, more than twenty-three thousand people with $1 billion each to buy that pack of cigarettes.

Remember the good old days, when cigarettes would only run you three quadrillion?

Needless to say, Josh called his bank and, after a couple of hours on the phone, managed to clear things up. His bank corrected the error the next day, and even removed the $15 overdraft fee they charged him. I think that's my favorite part of the story: you overdraw your account to the tune of 23 quadrillion dollars, and all the bank does is charge you a $15 penalty.

Imagine for a minute how you'd feel if you looked at your bank balance and saw 17 digits in the debit column. I mean, I'm pretty sure I'm safe in saying that few of us can get our minds around 23 quadrillion dollars. And paying it off? Forget it, no chance. Not in this lifetime. Not in a hundred lifetimes. All Josh could do was hope that the bank would see the problem and forgive his debt. Of course, he had reason to hope. He didn't really owe that much money. It was obviously a mistake, and the bank straightened it out quickly and easily.

Would that all our debts were that easy to take care of.

Forgiveness in real life, though, is a little bit harder. How do you forgive the harm done by an abusive teacher, for instance? Or a cheating spouse? How do you forgive wrongs committed by an envious colleague or a bitter friend? How do you forgive a thieving employee, or the drunk driver that killed your friends' child? And should you? Or does forgiveness imply that actions that are hurtful, sometimes horrifically so, aren't that big a deal after all?

“How many times shall I forgive someone who sins against me,” Peter once asked Jesus. “Up to seven times?” Peter probably felt like he was being pretty magnanimous to offer seven times; after all, if someone continues to hurt you, over and over, they probably aren't worthy of forgiveness. You can probably relate to Peter's question. Usually, a question like that isn't hypothetical. It might sound something like this, for you: “Lord, do I really have to forgive this person who continually abuses and belittles me?” Or maybe it's more a question of whether an injury could be so severe that forgiveness isn't even an option. It's a very honest question, isn't it? And Jesus doesn't directly rebuke Peter for asking it. He tells him a story instead to show that, honest or not, asking “how often” and “how much” in relation to forgiveness are the wrong questions to ask.

“It's like this in God's kingdom,” Jesus explains. He tells about a king who got out his ledgers to settle his accounts, and noticed that one of his debtors owed “ten thousand talents” – of gold, probably. A talent was a unit of weight, and an average wage-earner could expect to make the equivalent of one talent in about twenty years of work. Ten thousand talents is a ridiculous amount, an individual debt that no one could possibly accumulate. He owes this king something like twenty-three quadrillion dollars.

Well, the king demands repayment, or as close to repayment as is possible: everything he has will be sold, and his family sold into slavery. The debtor begs, pleads, and makes silly promises about repaying this ridiculous amount. But the king, Jesus says, took pity on the man and cancelled the debt. No payment plan. No bankruptcy proceeding. The king just crosses out that line on his ledger, and the man is freed from his debt entirely.

What Peter wouldn't have known then – but likely remembered later – is that God brings about this forgiveness through Jesus. Jesus, in effect, pays the debt that we owe. Much later, he'd reflect on this by writing that we have all been “redeemed” by “the precious blood of Christ.” (1 Peter 1:18-19) When Jesus prayed on the cross for the Father to forgive those who had put him there, the Father answered that prayer through Jesus' suffering. Our debt has been forgiven, but it was neither quick nor easy. It was the result of God's compassion for us, as shown through Jesus.

Of course, you might remember that the parable doesn't end there. The forgiven debtor loses his forgiveness just as quickly as he received it. Remember why? Sure you do. Because he wouldn't forgive his debtor, another servant who owed him a comparatively small amount. When the king hears about this servant's lack of mercy, he isn't happy. “Shouldn't you have had mercy...just as I had on you?” he asks. And he sends him to prison, where he'll be worked and, apparently, tortured until he can pay back the original debt.

“This is how my heavenly Father will treat each of you unless you forgive a brother or sister from the heart.” (Matthew 18:35, TNIV) Tough to hear, but it's fitting, isn't it? If we who have received God's extravagant mercy can't find a way to at least begin to offer forgiveness to our fellow servants, then we deserve to fall under his judgment, don't we? God looks for reasons to forgive, not condemn, so he knows when forgiveness is maybe just a little slow to come while we work out the hurt we've received. That's not what Jesus is talking about here. He's talking about a willful holding on to bitterness. But despite the harsh ending, the parable's full of hope: there is forgiveness from God for the worst of our debts, and in receiving that forgiveness we find the way to extend it to those in debt to us.

So receive God's forgiveness. Know that you'll never pay off or work off what you owe, and instead just accept his gracious forgiveness offered to you in Jesus Christ. And then spread a little of that forgiveness around to those who are in your debt. How can you not, knowing how much God has forgiven you?

A 23 quadrillion dollar debt. Up in smoke. Sound familiar?

Unless otherwise indicated, all Scripture quotations are taken from The Holy Bible, Today’s New International Version TNIV (r), Copyright (c) 2005 by International Bible Society. All rights reserved.
Posted by Patrick Odum at 11:54 AM