Letting Down Our Hair

Jesus answered him, “Simon, I have something to tell you.”
“Tell me, teacher,” he said.
“Two men owed money to a certain moneylender. One owed him five hundred denarii, and the other fifty. Neither of them had the money to pay him back, so he canceled the debts of both. Now which of them will love him more?”
Simon replied, “I suppose the one who had the bigger debt canceled.”
“You have judged correctly,” Jesus said. (Luke 7:40-43) 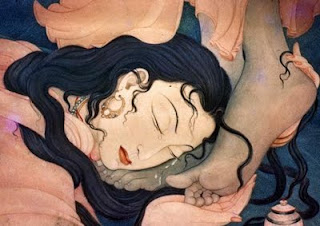 Her actions were rash. Heedless of the limits of politeness. Even scandalous. It was a serious enough breach that she walked into the home of a respected religious leader and interrupted his banquet without an invitation or introduction. Her faux pas was made worse by virtue of the fact that she was a woman. And everyone knew what kind of woman, and about the life she had lived – even if her exploits were more lurid in the town’s collective imagination than in actuality. She was pushing the boundaries of propriety by even showing up.

It seems, maybe, that her intent was originally to offer him the most valuable thing she owned – an alabaster jar of expensive perfume. She approached him as he reclined at the table on his side, his feet extended. But as she drew closer, the tears started to fall. One landed on Jesus’ feet, still dusty from his walk to Simon’s house. Then another. Then another. And then she noticed that his feet hadn’t been washed, and then she loosened her hair – loosened her hair – and used it to wipe off the tears and dust. And then it just made sense, somehow to open the jar and pour the perfume on his feet.

Simon, predictably and even understandably, is shocked. His righteous indignation builds with every moment the woman is in his house. His disapproval of Jesus, noticeable from the beginning to judge by his failure to see that Jesus’ feet were washed, rises accordingly. “If this man were a prophet, he would know who is touching him and what kind of woman she is—that she is a sinner,” he sneers to himself, comfortably satisfied that his initial judgment of Jesus in on target.

Maybe Jesus was able to read his mind. Most likely, he didn’t need to. What he thought of Jesus – and the woman – was probably written all over his face and body language. So Jesus can’t resist the opportunity to tell a parable, try to help Simon, or at least his other guests, to think differently about this woman and her actions. And more importantly, maybe, themselves and their own actions.

What Jesus does, in short, is to recast the woman’s actions in terms of gratitude. Even Simon, in his pious sanctimony, can see that the larger the debt forgiven, the greater the gratitude of the one forgiven. And therein lies his problem.

Simon sees Jesus, you see, entirely in terms of the religious system he’s inherited. For Simon, good people and bad people are easily distinguished, and movement from one category to the other is unlikely. Simon sees himself as “good,” probably always has, and so he doesn’t know much about the way grateful people behave.

For Jesus, though, the woman’s actions aren’t shocking at all. They spring from her gratitude. She’s heard, somewhere, Jesus’ message of God opening his kingdom to all. She’s believed that God’s kingdom is for the “prostitutes and tax collectors,” and so she’s come to imagine that it might be for her, too. She’s received God’s forgiveness, grace, and love, in spite of her sin, and her tribute to Jesus is the spontaneous response of a grateful heart.

“If you don’t get it,” Jesus tells his host, “then it might be because you don’t know what it is to be grateful.”

That’s what happens when religion starts being about defining ourselves as good, and stops being about celebrating the one who has given us such love, grace, and forgiveness. Our church pews can easily become full of Simons who wouldn’t recognize Jesus if he came in and sat down with us, and we show ourselves for who we are in the way we treat those who come among us full of the joy and gratitude of newly-received forgiveness. Too often we sit with arms folded, scowls on our faces, dwelling on who people used to be and oblivious to who God is making them into. Sometimes traces of gratitude and joy are hard to find in our churches, obscured as they are by our concerns for rigid respectability and religiosity. It’s been so long since some of us have considered how much we’ve been forgiven that we’ve forgotten how to love – love God, and love others.

Thankfully, though, the rehabilitation of our inner Simons isn’t as difficult as we might think. Gratitude isn’t that hard to recapture. It starts with acknowledging that we’re sinners, and not all that different from the folks that we’re tempted to look down upon when we’re in our “religious” frames of mind. We need to confess our sins, to ourselves and even to one another, for the simple reason that we need to know how much we’ve been forgiven. We need to stop excusing ourselves, stop justifying the things we do by minimizing them in relation to other sins or telling ourselves that they’re understandable under the circumstances.

If gratitude has to do with knowing how much we’ve been forgiven, then let us affirm that we’re sinners in need of mercy, and then joyfully proclaim the good news that in Christ we have received it. Let’s honor Jesus for what he has given us, and let us welcome into his presence other sinners who are learning the joy of God’s grace. And let our expressions of gratitude be so extravagant and un-self-conscious as to make Pharisees everywhere squirm uncomfortably.

Maybe then our churches will become what they’re supposed to be: communities in which all who want to express their gratitude to Jesus can let down their hair and find a place with us at the table.

Unless otherwise indicated, all Scripture quotations are taken from The Holy Bible, Today’s New International Version TNIV (r), Copyright (c) 2005 by International Bible Society. All rights reserved.
Posted by Patrick Odum at 9:47 AM