Standing on the Rock 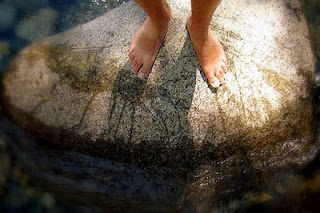 Yes, my soul, find rest in God;
my hope comes from him.
Truly he is my rock and my salvation;
he is my fortress, I will not be shaken.
My salvation and my honor depend on Godc;
he is my mighty rock, my refuge.
Trust in him at all times, you people;
pour out your hearts to him,
for God is our refuge. (Psalm 62:5-8)

The young man couldn’t speak. For several seconds, he was at a loss for words. Or too emotional to speak them out loud.

He’d just watched his football team lose, in the biggest game of his life. Watched, because he was injured only five plays into the game. He’d taken the snap, optioned to his left, and was hit by a defensive lineman. “I’ve taken that hit over and over my whole life,” he said. This time, though, wasn’t like the other times. A pinched nerve, maybe: “I’m not in any pain,” he explained in the post-game interview. “My arm’s just dead.”

So he watched, because a quarterback with no feeling in his passing arm can’t do much to help his team. He watched a true freshman try to fill his shoes, as if a freshman with little game experience could ever come into a National Championship Game and fill the shoes of a senior Heisman Trophy finalist. He watched his team try to rally, fight to keep it close, and then watched the freshman fumble away the ball and the game late in the fourth quarter.

The TV reporter had the nerve to ask him how it felt. “What was it like for you to watch this game, your last game in a Longhorn uniform, from the sideline?” Just doing her job, I suppose, but it seemed so heartless to ask that question, then, while the Alabama Crimson Tide soaked their coach with Gatorade and took turns kissing the crystal National Championship Trophy.

But Colt McCoy took a deep breath. He looked down, shook his head, chuckled, stammered a little. For a full eight or ten seconds, the only sound was the background noise of the stadium. But the words finally came. “I’d have given…I’d have given everything I have to be out there with my team…” he said, in measured phrases. Kind of cruelly ironic, then, that the price the game demanded of him was his right arm – the one thing his team needed. McCoy congratulated Alabama on their win, complimented his team for their fight, and his replacement, Gary Gilbert, on the game he played. He said all the right things, and could have stopped there.

But, no, you kind of got the feeling that he couldn’t have.

“I always give God the glory,” he went on to say. “I never question why things happen the way they do. God is in control of my life, and I know that…I’m standing on the rock.”

Having watched McCoy over the last few years, I feel pretty confident that those words were sincere. He has consistently given God the glory for his successes, and there was little doubt that in what must have been his most difficult moment in a football uniform, he found refuge and comfort in his faith in God.

Why ask the question, when you know the answer? McCoy seems to have found the answer to his “Why?” in God.

One of the traits that makes Colt McCoy such a good quarterback is his ability to move in the pocket. He has instincts that let him feel the pass rush, feel the direction the pressure’s coming from, and move enough to step away from it. And he does it all with his eyes downfield, watching for that split second when a receiver comes open and he can fire a pass to him. He’s always moving in the pocket, always shuffling his feet, always ready to step or run away from pressure.

But when the real-life pressure was on this week, he didn’t shuffle his feet. He didn’t run away from it. He took a breath and witnessed to the world that he was standing, still and solid, on the Rock.

The reporter didn’t know how to handle that. She quickly turned the interview to what she thought most of her audience cared more about: McCoy’s right arm. I’m guessing, though, that a good portion of the audience wanted to know more about Colt McCoy’s confidence and faith – even if they didn’t know they did. Because, if I was a betting man, I’d lay odds that there are a lot of people in our world right now who’d like a Rock to stand on.

McCoy wasn’t saying anything new, of course. David wasn’t either, when he called God his Rock in the psalm. God had called himself the Rock for his people, way back when he first gave them his Law while they wandered in the desert. To wandering people, unsure of their next move, or even their own survival, having a Rock sounds pretty good. A Rock who can give those who find refuge there rest and hope, a Rock who won’t be shaken, who’ll be a fortress in which those who trust in him find salvation. People want someone they can trust in at all times, and to whom they can pour out their hearts.

Maybe that’s why we forget, those of us who have just such a Rock – maybe we’re too comfortable. We’re used to things going well. We have homes and jobs and families and churches and friends that let us enjoy the illusion of self-sufficiency. We have strong right arms and know how to move away from pressure.

And then when something happens that shatters the illusion, we panic. “Why?” we ask, as if knowing why will help. We think we’ve lost everything, when we should be remembering that God is in control and that because of Jesus and his work of redemption, we have solid footing on the Rock, whatever may be spinning out of control around us.

Take it to the bank – there will come a day, sooner or later, when the events of your life will spin out of your control. You’ll be left feeling like you’re watching from the sidelines, helpless to call the shots or affect the outcome. When that happens, please remember that nothing has changed with your God. He’s still your Rock and Salvation, your Fortress and Refuge. Please remember that you can pour out your heart to him, and that you can trust him at all times. Especially when everything else fails.

And then remember to speak up about it. Because someone else needs to know your Rock.