If anyone is in Christ, the new creation has come: The old has gone, the new is here!” (2 Corinthians 5:17) 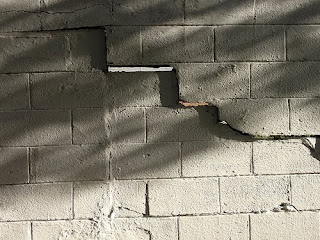 The New Year’s wish of the government of North Korea was the same this year as the last twenty or so. The official state newspaper of North Korea reiterated the wish this year, as it joined the rest of the world in marking the beginning of 2010. Their wish? That the concrete wall separating North Korea from South Korea be demolished on the grounds that its presence “runs diametrically counter to the desire and demand of the nation and the trend of the times.”

Kim Il-sung, who died 15 years ago but who is still venerated as North Korea’s “eternal President,” first called for the destruction of the wall in 1989, after the Berlin Wall fell. He placed the responsibility for the wall on South Korea, and called it “a barrier of national division.” He described the wall then as five to eight meters high and as much as 19 meters thick, and claimed that it was built in the 1970’s by a “South Korea military fascist clique.” Ever year since, the North Korean government has used the New Year as an occasion to call for its demolition.

A worthy goal, to be sure. There’s one small problem, however.

There is no wall between North and South Korea.

There’s a 4-kilometer-wide demilitarized zone. There are razor wire fences and tanks on both the north and south ends. There are some concrete tank barriers. But there’s no wall.

A few years ago, South Korea invited journalists and observers to take a look into the DMZ and see for themselves that no wall existed. But that hasn’t stopped the North from continuing to claim its existence, and continuing to blame the South. It seems that they don’t want to contradict their exalted former leader.

You might say it’s sad, to think of beginning another new year obsessed with the same old – and nonexistent – obstacles. You might even suggest, might you not, that as long as North Korea is focused on a wall that isn’t there, they’ll never see the possibility and hope for a new tomorrow that might really exist? You might suggest that. As long as you recognize that it’s not only other people in faraway countries who seem to prefer to dwell on the imaginary problems of yesterday, and blaming others for them, than to move forward into a future of hope and renewal.

Husbands and wives live for years and decades with the same old sources of tension and anger, blaming each other and refusing to forgive, never able to see that the walls between them are often only imaginary. Addicts live defeated and hopeless lives, assuming they’re at the mercy of their addictions and unable to see any promise or potential in themselves. Men and women go through their lives staggering under burdens of self-doubt and fear placed on them by their parents. Churches expend their energy and resources to preserve the old, rigid wineskins of tradition, and in so doing lose the power and promise of the gospel.

Well, it’s a new year. And when many of us make new year’s resolutions knowing full well we won’t keep them, we may need to remember something important. The gospel isn’t just about forgiveness of sins. It’s also about transformation. “If anyone is in Christ,” Paul wrote, “New creation!” In Christ, the God who created the universe creates again. He takes broken, injured, frightened, sinful people and remakes them into something brand new. Yes, he forgives sins – but that’s just the beginning. He renovates hearts and minds, restores hope, renews strength. He gives us a new perspective, a new view of the world, a new love for him and for others. He gives us a new desire to do right and a new awareness of when we do wrong. He gives us the strength to forgive, and to maintain hope in the face of trouble, and to say no to ourselves and yes to him.

To be in Christ is to be brand new.

It may not seem like it sometimes, because we still struggle with the evil, death, and despair that inhabits our fallen world. While we’re being made new in Christ, the world in which we live hasn’t experienced that new creation yet. Until it does, we’ll have to struggle with the enduring presence of sin – in those around us and in ourselves. But may we not forget in the struggle that in Christ we are being made new. The struggles and obstacles we face – whether in the world or in ourselves – aren’t the last word.

So don’t start this new year with your attention on the obstacles and difficulties of the past. No doubt you can think of many reasons to enter 2010 with despair, doubt, and fear. I can only give you one to enter the year with hope, joy, and peace. “If anyone is in Christ, the new creation has come. The old is gone, the new is here.”

I don’t know what you’re dealing with this year as the calendar turns. You may be living with real pain, struggle, grief, and hardship. Financial uncertainty is a reality for some. Family discord for others. This year, marriages will end. This year, some will say goodbye to parents. Some will say goodbye to children. Some will be caught in sins that rock their lives. Some will suffer the destruction of close friendships. I don’t want to minimize the pain and heartache of what we might face this year.

But whatever your year brings, please remember that if you are in Christ, God has begun his new creation in you. Nothing that you will face this year will change that, and nothing in your past, present, or future can determine any longer who you are. Yesterday’s walls are passing away; shadowy reminders of the way things were. A new world opens before you, a new world God has created in Jesus Christ. In him, you will have what you need to conquer – or endure – the struggles of this year.

In Christ, the walls are down. God has come to live with us and in us.