The angel of the LORD also said to her: “You are now with child and you will have a son. You shall name him Ishmael, for the LORD has heard of your misery…
She gave this name to the LORD who spoke to her: “You are the God who sees me,” for she said, “I have now seen the One who sees me.” (Genesis 16:11, 13) 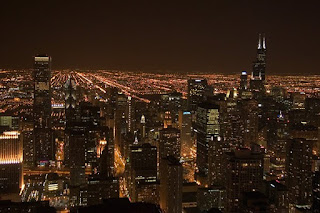 According to Forbes magazine, Chicago is one of the ten most miserable cities in America. (We just made the list at number 10.)

Now, I live in Chicago. I’ve called it home for nearly twenty years, in fact. It’s colder and snowier in the winter than I’d like. The cost of living is higher than some places. Traffic can be bad, and don’t get me started on the Cubs. (They’re now counting the time between World Series championships in centuries, not years.) I do miss mountains and southern accents, and I have to make do with Big Ten football.

If I may, there’s a lot to love about this city. There are museums, art, and culture. Pro sports. Great restaurants. Neighborhoods with cultural flavor. There’s one of the most beautiful lakefronts in the country, and several of the tallest buildings in the world. It’s not a perfect city, of course. But I certainly wouldn’t call it miserable.

So I started looking at the list. Several cities made it because unemployment was particularly high there. (Where is it not?) Others had high crime rates. For some, it was home foreclosures that got them on the list. The reasons for including Chicago, according to Forbes, were our long commutes and sales tax (the highest in the nation, thank you very much).

I don’t know; I don’t call that misery, exactly.

One city, believe it or not, made the list because their football team is 6-42 over the last three years. It strikes me that maybe, just maybe, the editors at Forbes are a little fuzzy on the concept of misery.

Where did we get the idea that we’re entitled to a certain amount of luxury, comfort, and affluence, and that we should call its absence something like “misery”? Forbes’ list could be more accurately called “The Ten Most Inconvenient Cities in the Country” or “The Ten Most Annoying Cities” or the “Ten Most Difficult Cities.” Misery, though – that’s a different thing. Misery is Port-au-Prince after the earthquake. Misery is the Ninth Ward after Katrina. Misery is children orphaned by war. Misery is crushing poverty, hunger, and disease.

Few of us have ever actually experienced true misery. At least, not for very long.

Hagar understood misery. She was the servant girl chosen by her mistress, Sarai, to bear a child with her husband, Abraham, in her name. Predictably, when she became pregnant Sarai decided that it wasn’t such a good idea. She treated Hagar badly, and Hagar decided she couldn’t live with it any longer. She ran away into the desert, carrying her unborn son.

God found her out there, though. His angel came to Hagar to tell her she was heading in the wrong direction. “Go back to your mistress and submit to her,” God told her. Sounds kind of cold, to be sure, but it wasn’t that God didn’t care about her situation. Just the opposite, in fact; the angel told Hagar to name her son “Ishmael” – “God Hears” – because the LORD had indeed heard of her misery. And that’s enough for Hagar. She goes back to Sarai with her son as a reminder that when people have to live through misery, God knows. When they cry out in pain, God hears. “You are the God who sees me,” she says. And that’s enough for her.

As people who maybe feel that misery – or even discomfort or inconvenience – is unendurable, we need to discover again what Hagar discovered. A person can live with misery – real misery, now – if she knows that her God hears and sees.

That’s the essence of the gospel, isn’t it? That God sees and hears, that he can’t ignore the misery of the people he made and loves, and that he’ll move heaven and earth to rescue us. He gave his Son, in fact – another Son who reminds us that God has heard of our misery and chooses to step into it, even endure a share of it, to save us.

We need to hear that, who label snarled traffic, poor sports teams, and high sales tax “misery.” We need to know that wherever we live, whether it’s in a city on the “most miserable” list or even in real misery, that our God hears and sees and that nothing will come between us and his love for us. Through the death and resurrection of Jesus, he has given us hope of life, peace, and glory – and insured that, for those who trust him, misery will not last and joy will be eternal.

So, wherever you live, listen for the voice of that angel who spoke to Hagar. Remember that God hears and sees what you’re going through. Remember the cross, remember the empty tomb, and know that he loves you and that he will one day take away misery and wipe away tears forever. Until then, trust him, be faithful to him, and live as a witness to his grace.

Especially if your city’s on the list. That’ll confuse the people at Forbes.

Unless otherwise indicated, all Scripture quotations are taken from The Holy Bible, Today’s New International Version TNIV (r), Copyright (c) 2005 by International Bible Society. All rights reserved.
Posted by Patrick Odum at 9:53 AM