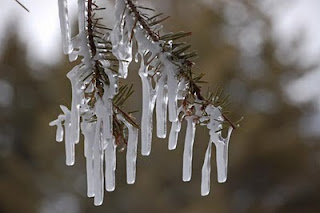 I wrote last week about being “more thoughtful and more prayerful about how we handle difficult, inconvenience, and injustice.” I said – what was it? – oh, yes: “When we take the difficulties of life and the misunderstandings of others on our shoulders with love, kindness, generosity, and forgiveness, the world must take notice.” I insisted that it’s not enough that we be willing to suffer for Jesus, but that “we’re called to suffer like him, as well.” (I have to be honest; I was especially proud of that turn of phrase.) I even got a little preachy about Christians who don’t handle inconvenience well – like, say, a diverted or cancelled airline flight.

So this week I got the chance to practice what I preach.

Specifically, I got stuck in Little Rock, Arkansas.

I’m writing this while a snowstorm blows outside, laying down a few inches of the white stuff on top of some sleet and freezing rain. By Chicago standards, it’s really not much of a snowstorm. By Little Rock standards, it’s off the charts. Nothing’s coming in to the airport, nothing’s going out. (As the nice lady at the counter explained to me – “We’re out of planes, honey.” They call everyone “honey” in Little Rock.) Unless anyone knows a place where I can rent a dog sled and pack of dogs in Little Rock, I’m out of luck.

I’m OK with that, though. I’d like to be home with Josh and Laura, but I’m warm and dry and comfortable. It was last night that I blew it, with the lady at the car-rental company. After my first flight got cancelled, I thought about driving home. The snow hadn’t really started yet, the roads were fine, and I thought about just taking the rental car I had back to Chicago. I called the company, and was informed that the particular agency I had rented from “wasn’t corporate”. That meant that there was no place in Chicago I could leave the car. In fairness to me, she wasn’t very helpful or nice. I told her that I understood the problem, and I hoped that she could understand mine. The best she could do was tell me that I could drop the car at an agency in Indianapolis. Which didn’t help at all. Finally, I asked what would happen if I just left the car at my hotel and rented from another agency to drive back to Chicago.

She shouted at me: “I don’t know! That’s never happened before!”

I found that hard to believe, and told her so. Loudly. Never? Really? No one’s ever rented a car from you and then had to change their plans? I was not nice. Indignant, that’s the word. Did she not care about her customers? Couldn’t she work with me in an unusual situation, instead of insisting on her policy?

In short, I didn’t do exactly what I said we Christians should. I didn’t handle this particular difficulty with love, kindness, generosity, or forgiveness.

I realized it, eventually. When I did, I went back and read Philippians 4 again, where Paul says he’s “learned the secret of being content in any and every situation.” If you know anything at all about Paul, then you know that he found himself in some fairly hair-raising situations. He was hungry sometimes, near the point of literal starvation. He spent some considerable time in jail. He narrowly escaped lynch mobs more than once. He had health problems, relational problems, and he was even shipwrecked once. And that doesn’t even include the stress of travelling all the time, dealing with church problems, and putting up with people who went out of their way to sabotage everything he tried to do.

The secret, though, is a little tough to hear. Paul says that his ability to be content whatever the situation comes out of replacing himself as the one around whom the world revolves. That’s my problem, I guess. In some way, I feel that I’m entitled to be home with my family when I want to be. I feel I’m entitled to have others bend over backward to help me with my problems (especially when I’m paying them!) But with his believe that Jesus had risen from the dead and his decision to let Jesus call the shots in his life, the center of gravity in Paul’s life changed. What happened to him mattered not nearly as much as whether or not he lived a life that was faithful to his new calling. And with that perspective, things that he once would likely have considered crises became non-events.

When we hit the panic button too early, we invariably lurch into crisis mode and try to come up with our own solutions to our problems. Trouble is that our own solutions are almost always about finding a quick way out, with as little personal discomfort as possible. And sometimes, when we’re in crisis mode, we don’t care who we hurt.

Sometimes there’s no better way to learn that than to have your plans changed for you.