When they came to Jesus, they found the man from whom the demons had gone out, sitting at Jesus’ feet, dressed and in his right mind; and they were afraid. Those who had seen it told the people how the demon–possessed man had been cured. Then all the people of the region of the Gerasenes asked Jesus to leave them, because they were overcome with fear. So he got into the boat and left.
The man from whom the demons had gone out begged to go with him, but Jesus sent him away, saying,“Return home and tell how much God has done for you.” So the man went away and told all over town how much Jesus had done for him.
(Luke 8:35-39) 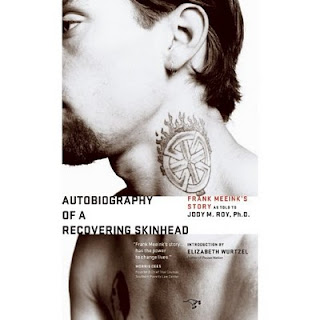 Frank Meeink lives in Iowa with his wife and children. He runs a multi-racial hockey league for kids, called Harmony through Hockey. He makes a living traveling around the country speaking on diversity and tolerance. That's a long way from where he came from, and not just geographically.

Frank grew up with his father in south Philadelphia, after enduring beatings from his mother's boyfriend. His dad's house was in a predominantly black neighborhood, and he was one of just a handful of white students at his school. He and his friends would get off the trolley they took to school in the mornings and run the few blocks to the door, hoping there would be no trouble. At least, at first he hoped there wouldn't be trouble. Eventually he started to look for it.

Visiting a cousin in rural Pennsylvania, Frank was introduced to the white supremacy movement. He was 14, and it seemed to him that all the anger he felt about his situation was resolved in the doctrines of the skinheads. Back in Philadelphia, he and his new “band of brothers” started vandalizing synagogues and beating up and sometimes killing minorities and homeless people. He attended monthly KKK meetings to affirm his beliefs.

At 16, he had to leave Philadelphia, just one step ahead of the police. He eventually found his way to Springfield, IL, after a suicide attempt and an escape from a mental health facility in Indianapolis. In Springfield, he became something of a local celebrity. He even hosted a public access talk show – “The Reich.”

The police finally caught up to him there, however, and he was arrested and sentenced to three years in the Illinois prison system. Through sports and Bible studies, he got to know some of his black, Hispanic, and Asian fellow inmates. “You begin to look at people as individuals,” he says now. He begin to see how much they had in common, how they weren't as different from him as he'd thought. As he'd been led to believe.

When he was released, he realized he had very little in common any longer with his old skinhead brethren. He got a job working in an antique furniture store – the owner of the store was Jewish, ironically enough – and started to build a new life. He also started to become burdened with other kids who were growing up the way he did. That's what gave him the idea to start the hockey league and do the talks.

There was one last vestige of his old life, though, that had to go. So he spent a year having tattoos lasered off or transformed - a 5-inch swastika tattoo on his neck, the words “skin” and “head” on his knuckles, a portrait of Joseph Goebbels on his chest, among others. In some ways, his transformation is written in ink and scars on his body.

It would have been so easy to write off Frank Meeink as a lost cause. It would be easy to assume that he'd never make a positive contribution to the world around him, that he'd live and die wallowing in the hate and violence that characterized his early life. I'm sure there were a lot of people who helped Frank's redemption come about, but he credits one in particular: a “big black dude” in prison who invited him to a Bible study. He went out of fear, he says, but stayed because something in the scriptures resonated with him and suggested to him that there was a way out of the life he'd chosen.

As much as I like Frank Meeink's story, I'd love to hear more about the black man who invited a white supremacist to a Bible study.

And when somebody does that, somewhere, sometime, God uses it to bring about transformation.

We need them, too. We need their wonder and joy in the gospel of Jesus to remind us of what God has done for us. We need their vitality in our churches, even if it makes things a bit more scary and disordered and chaotic than we've grown used to. We need, most of all, maybe, the power of their witness. We need in most of our churches people running all over town talking about what Jesus has done for them, don't we?

It doesn't always come out like Frank Meeink's story did. But how do we know, until we get out of our comfortable churches and take the good news – in word and in deed – to people marked and twisted by Satan? How do we know, until we open the doors of our lives and hearts to the people everyone else has given over to death?

You're somebody. And right now, right where you are, is another Frank Meeink.

Don't you want to be part of the transformation?
Posted by Patrick Odum at 8:37 AM