Do not lie to each other, since you have taken off your old self with its practices and have put on the new self, which is being renewed in knowledge in the image of its Creator. (Colossians 3:9) 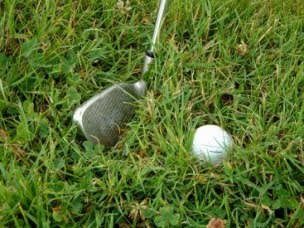 Jim Furyk won a golf tournament last week in Hilton Head, SC. But something his opponent did outshines his win.

Furyk was tied with Brian Davis, an Englishman who has never won on the PGA tour, at the end of the Verizon Heritage tournament's final round. That meant a playoff: Furyk against Davis, as many holes as necessary to win. Davis' approach shot rolled off the green on the first hole. He had to chip on from a marshy area just off the green. As he did, he inadvertently nudged a loose reed with his wedge on his backswing.

No one seemed to have noticed, and it didn't improve his ball's position or affect his shot.

But Brian Davis knew that the strict rules of golf prohibit touching “a loose impediment in a hazard.” “I thought I saw movement out of the corner of my eye,” Davis explained. Again, he seems to have been the only one to see it at the time. He could have ignored it. Gone on and played his next shot. He might have still lost, but he might have won, too.

Instead, he immediately turned and called to one of the rules officials who stand by at PGA tournaments. The official checked the video and found that Davis had, indeed, just brushed one of the reeds.

The violation carries a two-stroke penalty. Furyk putted in to win, but only after going to Davis and asking him if he was sure of the violation. Davis responded that he knew what he'd done and “couldn't live with [himself]” if he hadn't owned up to it.

Honesty can be inconvenient sometimes. Character can be uncomfortable. It cost Brian Davis his first PGA win and a couple-million-dollar paycheck. It can cost a student who decides not to cheat, a teenager who refuses to take refuge in an easy lie, a salesman who won't pad his figures to land a big account. Sometimes it demands that we truthful about our own mistakes, irresponsibility, or sin. Sometimes it requires that we speak the truth to someone else about theirs. Character reminds us that being able to get away with something is not the same as whether or not we should get away with it.

The world we live in isn't always an easy place to make such distinctions. Some observers seem downright puzzled by Brian Davis' scrupulous concern for such an obscure rule. They don't understand why he would cost himself the chance at a win by admitting a violation – especially one that didn't affect his shot. But character, honesty, and integrity can't always be summed up with a cost/benefit analysis. They don't fit on a spreadsheet. Character doesn't pick its spots. It isn't something you turn on and off, and it doesn't care whether anyone's watching. That's because character doesn't exist outside a person. It comes from inside us, from our heart and minds.

“When we play,” Brian Davis said of himself and his colleagues on the PGA Tour, “we play by the rules. We don't even think about it, because it just happens.” He means, I guess, that the rules of the game are so ingrained in him, such a part of who he is, that following them doesn't require a lot of internal debate and discussion. It would take more energy for him to break them than it does for him to follow them.

When you follow Jesus, the Bible says, something like that happens to you. It's like you put on a new you, sort of like a new shirt. It happens over time, not necessarily all at once, and there will be places where the new you and the old you don't coexist very peacefully for a while. But you put on this new self when you give your life to Jesus. And something interesting starts to happen, something completely outside your control. You start to look and act and talk like Jesus.

Your new self is “being renewed in knowledge in the image of its Creator;” that's the way Paul puts it. You can cooperate with that renewal, or you can resist it. There's nothing to prevent you from going back and wallowing in your old life every chance you get. But it's happening, and the more it happens the more your old life will seem like a contradiction. “Don't lie to each other,” Paul says, but not because you're afraid of hell. “You've taken off your old self, with its practices, an have put on the new self.” And this new person you are is being renewed and renovated, made to look like Jesus. And dishonesty is now out of character for you.

You know, of course, that you can still cut ethical corners if you want to. Just like Brian Davis could have pretended not to see that reed move. If you're like me, there will still be situations from time to time that will test your character, and you might not pass every one of those tests. Don't downplay the fact that you have an Adversary who is doing his best to convince you that down is up and up is down. But the longer you follow Jesus, and the more you look like him, the more character becomes a part of who you are, so ingrained that it will take more energy and internal argument to go against it than along with it. That character is from the Holy Spirit, working in you to sharpen your sense of right and wrong, stiffen your resolve, and prick your conscience.

In Christ, integrity is a part of who you are. Sometimes all we need is a reminder to live out of that new sense of identity. Whoever you might have been, in Christ you're no longer a person who finds it easy to cheat, lie, mislead, or take advantage. Every time you do so, it will take a battle of will. So why fight it? Why not just go along with what God is doing in Jesus to make you into a new person?

Maybe it's time today to call a penalty on ourselves. Maybe it's time for us to address the character issues in our lives, the “small” lies and dishonesty, the ethical cut corners, that make life run a little more smoothly. That's not who we are. That's not us, not anymore. Not if we follow Jesus.

For us, now integrity ought to be...well...par for the course.