Then Jesus was led by the Spirit into the wilderness to be tempted by the devil. After fasting forty days and forty nights, he was hungry. The tempter came to him and said, “If you are the Son of God, tell these stones to become bread.”

Jesus answered, “It is written: ‘People do not live on bread alone, but on every word that comes from the mouth of God. (Matthew 4:1-4) 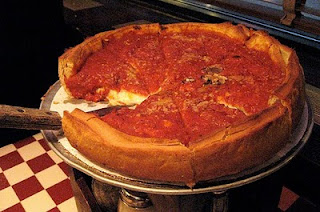 Nick Sherman is a pizza fan. More like a raving pizza lunatic. The 27-year-old font designer from Brooklyn writes a blog called “Pizza Rules” in his spare time. But the blog isn't what makes him a pizza fanatic. It's April.

Yes, April, the month. Because in the month of April, Nick eats pizza every day. He started a few years ago by resolving that he'd eat pizza for at least one meal each day of the month. He found himself going to the same pizzeria near his home pretty often, so the next year he changed the rules and resolved not to eat at the same place twice during the month.

This year he needed a new challenge, and so when April rolled around he went off the deep end. Nick resolved that this April, he'd eat nothing but pizza. Every day. For every meal. For a month. Pizza.

He was serious about it, too. And public, when he needed to be. One day he had to explain to his boss and some clients at a business lunch that he wasn't eating anything because the restaurant didn't have pizza. Nick told them about the blog, and his commitment to eat nothing but pizza.

Oh, by the way, he weighs 138 pounds. Two pounds less than he weighed when he started his pizza diet. Turns out that eating pizza for every meal kept him from snacking during the day. Most days he only ate one or two meals, he says.

The hard part, Nick says, wasn't that he got tired of eating pizza. It was “not eating other stuff.” Well, yeah. You'd start to miss chicken, pasta, cheeseburgers, Caesar's salads. By tax day, you'd be wanting an orange, or an ice cream cone, or beef chow mein, wouldn't you? Not to mention that an all-pizza diet isn't very balanced, nutritionally speaking.

People aren't made to live on pizza alone.

I imagine, of all the temptations that Jesus experienced in the desert, that first one would have been the worst. The allure of wealth and power aside, when my stomach tells me it's time to eat, it's hard for me to say no. Turn stones to bread? Surely the One through Whom the world was created could have. And, after all, he pretty much wrote the rule book for divinity and humanity taking up the same space. If the human body that he chose was slowly starving to death, who would blame him for utilizing a little divine prerogative to feed it? Just a word, a minor rationalization, and he could be full. True, it would mean accepting one of Satan's ideas. But what good would it accomplish if God let him starve to death in the desert?

See? That's the temptation – that we know better than God what we need for life.

It goes back to Adam and Eve in the Garden. Don't imagine that the serpent didn't take advantage of the human need to eat there. “Looks good, doesn't it, Eve? Go ahead, baby. What's the harm in having something to eat?”

How many mistakes have you made when you were hungry? Bought those cookies at the grocery store because your mouth was watering for them? Messed up the new, healthier diet because you came home from work famished and dinner was still 2 hours away? Didn't do so well on a test because you skipped breakfast to study? It's hard to listen to anything else when your stomach's growling, isn't it?

And how many mistakes have you made when you were hungry for approval, or comfort, or wealth, or success, or validation, or revenge?

Want to know a secret about us human beings? We're almost always hungry for something. And left to ourselves, we will do pretty much whatever we think will satiate our appetites. Paul talks about some people behaving as if “their God is their stomach,” and truth be told all of us have behaved that way at one time or another. We're instinctively hungry for whatever we think will sustain or improve our lives. Usually, though, what we choose isn't much more varied or balanced than Nick Sherman's April menu. Whether it's wealth, or power, or pleasure, or control, or admiration, we will fixate on it and stuff ourselves with all we can get. And we'll call that living.

We need to learn that law that Jesus learned in the desert, that Israel before him were supposed to learn as they wandered and depended on God to literally drop bread from heaven: “People do not live on bread alone, but on every word that comes from the mouth of God.” For Israel, it meant learning to trust that every morning, God would give them enough for the day. For Jesus, it meant learning to trust that God would take care of him when he had nothing for the day. For forty days.

Jesus didn't listen to the excruciating emptiness in his gut. Instead, he listened to his Father. What he heard was enough, apparently. Which leads me to think that, on those occasions when my gut speaks louder than my faith, maybe I'm just not listening well enough. When Satan's telling me to make a meal out of something that's just going to sit in my stomach – well, like a rock, spiritually speaking – I especially need to listen for God's voice and hear what he tells me.

Bread's not enough: even if it's topped with cheese and sauce and pepperoni. Neither are the things we human beings hunger for so much and value so highly. What we need for life comes from God, spoken into being by his word. May we listen. And live.