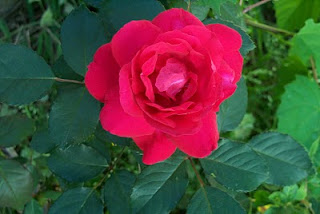 My wife loves roses, and I love roses, so several years ago I planted a rose bush in my yard. Actually, it doesn't seem quite ethical somehow to call this particular plant a bush. For me to say "rose bush" makes you think of something with lots of leaves, that produces lots of roses, and that grows from year to year. And that wouldn't be completely honest in this case.

I could blame the rose bush. I could call it a lemon, or a dud, or whatever. But that wouldn't be accurate either. The rose bush doesn't do well, I imagine, because it hasn't had much of a chance. Basically, I dug a hole and stuck it in the ground. I haven't fed it. I water it only occasionally. It probably gets too much sun. I have no idea what the soil pH is -- or what it should be. I don't even talk to it.

Poor rose bush. And yet, every year, that scraggly, sorry little plant is good for one or two nearly perfect, beautiful red roses. One day, I'll notice that a bud has formed. And then, not too long afterward, that bud will bloom. It isn't much. I still need a florist if I want to bring Laura a dozen roses. But it's like that little bush sucks up what little attention I give it, soaks up what rain and nourishment it can, endures the summer heat and winter cold, and then pulls it all together and uses it all up to create one gorgeous little flower. That's all, until next year. It's used up. But it blooms.

Sometimes I think I know how it feels. How about you? Sometimes I feel like I don't compare well. Don't measure up. I'm not as good a father as my father was. I'm not the husband that my wife deserves. I feel sometimes like I'm not as motivational a preacher as I should be, not knowledgeable or dynamic enough as a teacher. My church isn't as big as some. I don't think sometimes that I'm very wise as a counselor, very understanding as a minister, very expressive as a writer, very helpful as a friend. I don't feel that I do enough good or resist enough evil. And frankly, I suspect that my attempts to worship and be obedient to God are usually about as feeble, scraggly, and sickly as that rose bush in my yard.

And that's when I have to remind myself that I am still a rose bush.

Well, not a rose bush. But even when I don't produce like I should, even when you wouldn't know it by looking at me, I am still a child of God and I am still a follower of Jesus. I can relate to Paul when he talks about holding the "treasure" of the gospel, but as a "clay jar." He carried in himself the revelation of God through Jesus, but as a common, everyday container with flaws and even cracks. As a container, he wasn't worthy of what he carried. But he decided that was as it should be: "We have this treasure in jars of clay to show that this all-surpassing power is from God and not from us." (2 Corinthians 4:7)

Jesus told a story of three servants given money by their master to do his business. In the story, two of the servants take that money and get busy for their master. The last servant does nothing with what he's been given. The interesting thing about the story is that the two servants who produce are rewarded equally, despite the fact that one produces more than the other. The reason, of course, is that the master's expectation is based on the servants' ability. He doesn't compare them with one another. He sees that they've taken the opportunities and resources they've been given and put them to work diligently for him. The verdict on both? "Well done, good and faithful servant! You have been faithful with a few things; I will put you in charge of many things. Come and share your master's happiness." (Matthew 25:23)

So the Master won't judge you, in the end, by how well you compare with anyone else. He'll look at the soil you've been planted in. He'll gauge the care you've been given. If the sun has beaten down on you mercilessly, or if you've had too little sun, he'll see that. He doesn't want to know how you compare with your sister, or your mentor, or your parents' expectations, or your husband's demands. He doesn't care whether or not you've lived up to your own image of what you should be. He doesn't care if you're famous, or accomplished, or well-known, or even well-liked. He'll have one question, and only one.

The bloom, you see, comes from God's Spirit inside you. It comes from the power of Christ living in you. When Jesus comes in contact with a life, that life blooms -- no matter how dry and hopeless it looks. We compare ourselves with others, and alternately feel pride or despair. God looks at us like I look at that rose bush: aware of our limitations and delighted when in spite of them he sees a bud. So give yourself a break. Resolve right now to use every bit of energy, every resource God has given you, to burst into bloom for him. Then stop playing the comparison game. It's one you'll never win.

But one day, you'll see the Master's face and hear his voice. Know what he'll do? Same thing I do when my valiant little rose bush manages to bloom. He'll take you out of the hot sun and the dry soil in which you've been planted. And he'll take you into his home. "Well done," he'll say. "Well done." And there you'll stay forever, with him. Just as beautiful and alive as any other bloom in the place.