The older brother became angry and refused to go in. So his father went out and pleaded with him. But he answered his father, “Look! All these years I've been slaving for you and never disobeyed your orders. Yet you never gave me even a young goat so I could celebrate with my friends. But when this son of yours who has squandered your property with prostitutes comes home, you kill the fattened calf for him!”
“My son,” the father said, “you are always with me, and everything I have is yours. But we had to celebrate and be glad, because this brother of yours was dead and is alive again; he was lost and is found.”
-Luke 15:28-32 (TNIV) 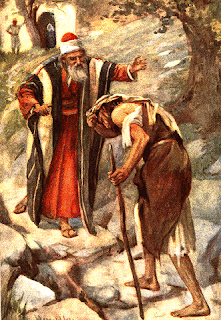 That's right. I wouldn't go in. Well, it would have been a farce for me to go to that party. Ungrateful, spoiled brat. My brother, you say? He's my brother? Well, just because we have the same father doesn't mean I have to be in the same room with him! As I recall, it wasn't that long ago that he didn't want to be in the same town as us.

He didn't tell you about that, did he? No, I didn't expect that he would. My father keeps saying he was lost, but he wasn't lost. He knew where he was, and it was right where he thought he wanted to be. He left. He didn't wander off, or get turned around or kidnapped. He asked my Father for the inheritance he had coming to him and he left. Can you imagine? And dad – oh, he sold off some land and some of his herd so he could give that ungrateful jerk just what he'd asked for. And so he left. He told us we were provincial and that there was no life for him here, and he left the town that's been good enough for generations of our family before him for pagan temples and brothels.

Any idiot could see what was going to happen – any idiot except my brother, that is! As long as he was paying for the food and the wine and the whores, he had more friends than he could count. But then the day came when Big Shot had spent his last shekel, and suddenly all his “friends” had somewhere else to be. I know – what a shock, right?

I guess he bounced around a little after that. I'm a little fuzzy on the details, but get this: he wound up working for a guy feeding pigs. Yeah, how far can you fall, right? Well, it isn't like my little brother had a lot of options open to him out there. Near as I can tell, feeding pigs is about all he's qualified for. I say that pig pen was just the place for him. You make your bed, you lie in it. If he started getting hungry, I'm sure the pigs would have made room at the trough for him.

But, no. This town doesn't look quite so “provincial” when you're looking up at it from rock bottom. That's when he came dragging home, dirty and tattered and smelling like pork chops. If I'd seen him first, well, we wouldn't be having this conversation. I'd have taken a stick to him and run him off. But I didn't see him first. My father did.

My father saw him first because, truth be told, my father put his life on hold the day my brother left home. Spent a lot of time sitting in front of the house, looking down the road. He suddenly got really interested in everything the merchants traveling through town had to sell; well, obviously, he was asking them all if they'd seen my brother, if they had any news about him. I'd talk to him, and it seemed like he was a million miles away. Always looking for him, always waiting for him, always waking up believing that every day might be the day that my brother came home.

So I wasn't surprised that my father saw him first. I was a little surprised when he hoisted up the hem of his robes and took off down the road to meet him. I guess the old man still moves pretty good – still, how embarrassing. I heard later that my brother, in a rare display of humility, actually offered to be one of my father's servants if he could have room and board. At the very least, I wish Dad had taken him up on that offer. I would have enjoyed that, having my brother as one of our servants.

I would have enjoyed it more if dad had called the village together and stoned little bro to death.

He didn't do that either, though, and that's why there's music and dancing and food inside and why I'm standing outside. Dad hugged him. Took him in his arms and hugged him and sobbed on his shoulder like a sentimental old coot. And then he went completely over the top. He sent the servants off to find the best robe in the house – his robe, the one I would have inherited one day – and told them to dress him in it. He had them put shoes on him. He told them to put a signet ring on his finger – power of attorney for the household. And he had them kill the fattened calf and organize a “Welcome Home” barbecue. Like he'd been off fighting in a war or something, instead of wasting my father's hard-earned money.

I'll never forget getting in from the fields and hearing the music. Want to know something? I thought for a minute it was for me. I thought for just a minute that my brother being unfaithful had made Dad realize and appreciate just how faithful I'd been. Should have known better. He wouldn't even kill that tough old billy goat that's been around here since Adam and Eve for me. And I work myself half to death for him. I do everything he asks! I guess you have to thumb your nose at him, steal his money, and waste your life for him to care anything about you.

He did notice I wasn't there at the party, at least. And he did come out to me. I mean, he didn't go nearly as far for me as he did for my brother, but he did come talk to me. “You're always with me, and everything I have is yours.” That's what he said to me. Well, I know. It's just nice to hear it sometimes.

Know what else he said? “We had to celebrate and be glad.” Really? I thought celebration was for people who do what they're supposed to. What is it about my Father that makes him so compelled to have a party when the son who has disrespected him and dishonored him comes home? And what is it that makes it so important to him that I come to the party too?

I'm not sure I'll ever understand it.

Maybe I should open the door and go welcome my brother.

At the very least, maybe I should show up at my father's party.

Unless otherwise indicated, all Scripture quotations are taken from The Holy Bible, Today’s New International Version TNIV (r), Copyright (c) 2005 by International Bible Society. All rights reserved.
Posted by Patrick Odum at 12:27 AM